Erik over at "The Swedish Intelligencer" blog has been playing a bunch of "Eagles Cheaper than Brain Cells" Grand-Tactical Napoleonic games lately, including a historical Friedland refight.
Reading Erik's multiple battle reports really made me want to get a game of "Eagles" back on the table, especially being one of the rules I am testing out as part of the "simple wargaming" project.  Truth be told, I have not yet fought a large historical refight with Eagles before so I felt the time had come!  Eckmuhl and the other battles leading up to Aspern-Essling have some scattered and localized actions and I found some scenarios based on the French III Corps actions in the northern half of the battle on day 1, where Davout must hold out for reinforcements and Charles picks his moment to attack.
For this game I used 3D6 for French orders, and 2D6 + 1D3 for the Austrian orders, representing the sluggish nature of the Austrian command.

The French start with initiative on turn 1.  Both sides rolled up good orders on turn 1 and move out with the French arranging themselves for an assault on Obersanding.  They'd demonstrate against Oberlaichling.  The lights in the center will skirmish with the Austrian Grenzers in the woods for almost the entire battle.  BTW, the battle was to last for 15 turns but with a twist.
If neither side had reached a "breakpoint" of 6 stands knocked out along with their geographical objectives held, I would roll to end the game starting after turn 15.  If on turn 16 I rolled a "6" the game ends.  If on turn 17 I rolled a 6 or 5, the game would end, and so on.  As it turns out, I did not need that rule in place.  More on that later.
The breakpoint was a new concept as well.  I chose 6 units, with each unit being a victory point, and the geographical objectives also being worth a VP each.  Once your army hits its break, it must roll under the Breakpoint minus every stand that is knocked out over breakpoint.  So if you have 8 stands knocked out, that is 2 over your breakpoint.  6 minus 2 is 4.  Meaning you have to roll 4 or less for your army to stay in the game.  This also became a convenient way to end a large battle.
Naturally, with 2 divisions poised against each other in such close proximity, Obersanding would become the scene of incredible violence as Brigade after Brigade from both sides smash themselves against it.
The Austrians get the jump on the French and garrison Obersanding and Oberlaichling.  It's tough to coordinate all of the Austrian brigades but they are able to eventually move up a number of reinforcing brigades around Obersanding.  Grandeau's men are determined to take the village!

In Eagles, you roll your current strength points, adjusted for terrain or position, in close combat.  The first assault on Obersanding is incredibly violent and destructive as the defending Austrians score 100% hits against the French Brigade, who also score 100% hits.  A French brigade is destroyed on turn 2!  The Austrians suffer 3 hits themselves. 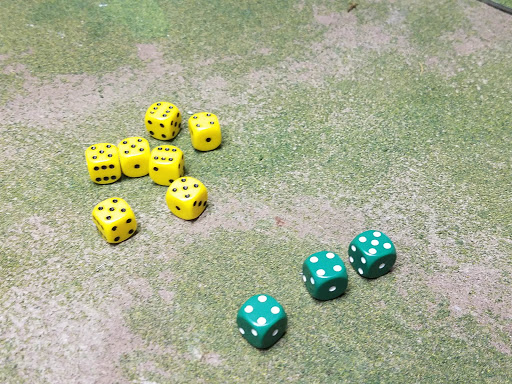 The French capitalize on their positioning but the constant attacking is wearing them down.  Good thing I have a reserve ready!

Heavy fighting continues around Obersanding which changes hands again as a Hungarian infantry brigade takes it by storm.  The French are pushed back and there are a concerning amount of French infantry brigades with a significant amount of hits on them.  Time to rally some of those off!

The French are kicked out of Obersanding, but recapture it on turn 4, only to lose it again on turn 5!  This see saw action is exactly why I love these rules!

Turns 7 and 8 see the lines become more organized as both sides shepherd their fighting strength.  There aren't as many foolhardy charges anymore.  The lights in the center need to get into the fight. 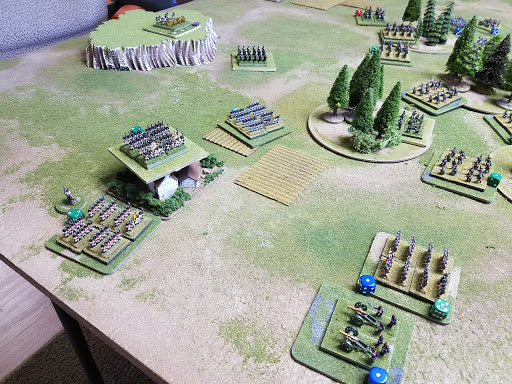 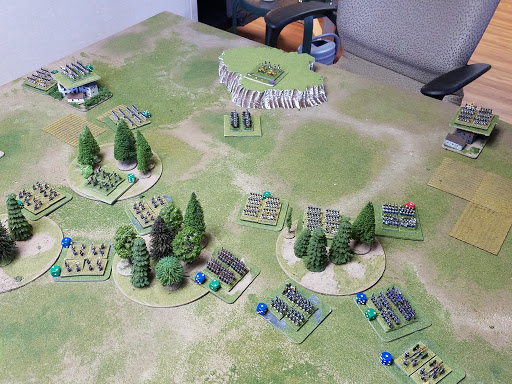 With something of a stalemate on the French left, they switch focus to the right and possibly taking Oberlaichling.  The Austrians see what's up and pull back closer to the town.  The French will have to fight through a division's worth of troops to get there! 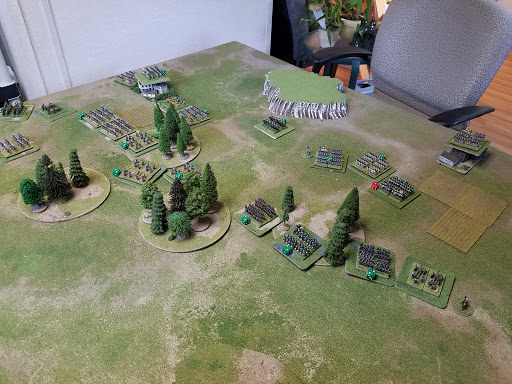 The French give it one more big push against Obersanding and a fresh Brigade goes disorganized, getting hit with a volley from an "ordered" unit.  This is one of the dangers of going first in "Eagles" - assaulting a unit with an order on it can see the unit "react" by shooting prior to melee.  The defending Austrians disorder the assaulting French.
The French lights harass the Austrians with high hits in an effort to kill more units, but it's obvious the French will not be able to capture either town.  I call the game! 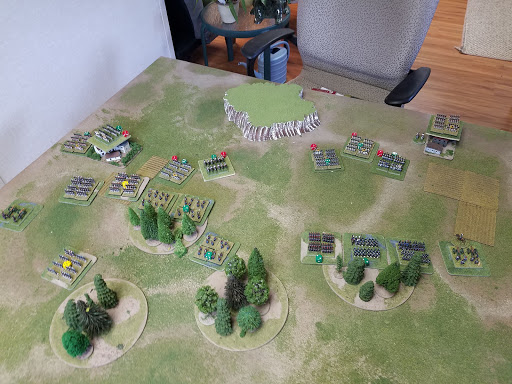 The Austrians put their Hussars to good use and assault the advancing French on the right in the flank!  The powerful charge and ensuring melee wipes out BOTH units - I told you this was a brutal and violent battle! 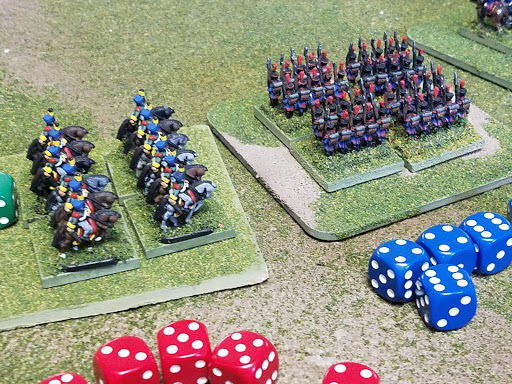 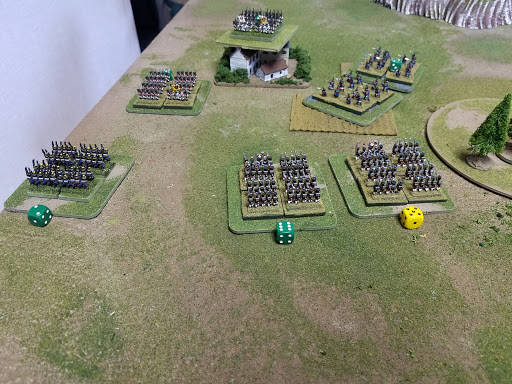 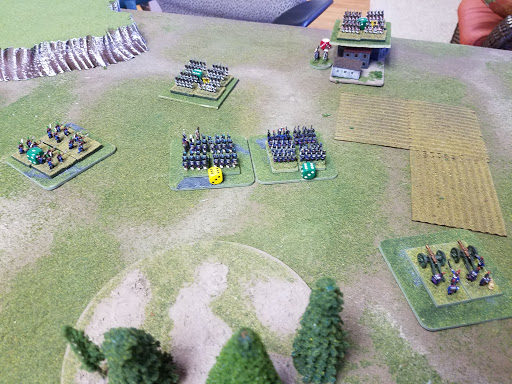 WOW What a game!  This was great fun, loaded with reversals of fortune as the initiative constantly changed hands during the battle.  The French and Austrians both took advantage of battlefield opportunities and the violent and quick thrusts in the beginning of the battle were tempered with more static shooting during the second half as both sides licked their wounds and rallied.
That may have been due to me not playing the rules in a long time but either way it was great fun.
I really love the orders system which is in place so you can't do everything you want on every turn.  This forces you to identify your main effort for the turn.
You can set up your forces for attacks, bombard the enemy to soften him up for a ground assault, and use cavalry for a killing blow to a unit on the ropes.
For this battle, I feel as the French I could have used my lights more effectively to cut off Obersanding and harass the defenders with ranged fire.  For the Austrians, the "demonstration" in front of Oberlaichling could have been more aggressive and harder on the French but all of my focus was really fixated on the left in Obersanding.  Couple that with a few turns of relatively little orders (3 turns in a row of only 5 or 6 orders for BOTH the French and the Austrians!)
I like the fact that when you're 1 base width from the enemy, it costs 2 orders to order a unit.
I like the ranged fire even through some decry it in a "grand tactical" game I still enjoy shooting and these brigades had many resources in the form of skirmishers, artillery, and maneuvering line battalions.  The ranged fire represents the more "close fight" going on at the battalion and company level.
EAGLES is really one of my favorite games because of the story it creates.  I plan on playing another "Eagles Cheaper than Brain Cells" game and will apply the "Simple Wargame" questions to it.
This is probably all of the gaming I needed to convince myself to singly base these units.
Some things that need to be looked at:
Retreating/Withdrawin units and "traffic jam" rules
Officer casualties
Breakpoint and Endgame for "open" battles not taken from the OHW scenarios.
Posted by Disgruntled Fusilier at 12:40 PM