The Gates of Stalingrad - The Suburbs Battles

Ken and I played a quick 65 point Flames of War battle today using pre-made lists from the "Iron Cross" (German played by yours truly) and "Enemy at the Gates" (Soviet played by Ken).  Using the battles guidance from the book, we played a drive on the city and the first battle was the "outskirts".  There is a neat mission guidance in the books that stipulates the attacker must first win the "outskirts" battle, then can battle into the city center.  If Ken wins the next game, I'll find myself back in the suburbs again! 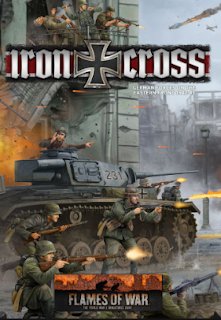 The FOW rulebook has pretty cool guidance on mission selection and we used the matrix to determine what battle we would ultimately play.  The mission selected at random was "strategic withdrawal" which is a mission I absolutely dread as the defender, but seemed to fit in historically.  Basically the defender must buy time as the army pulls back and defending units will slowly exit the battlefield. 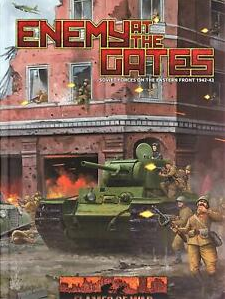 I like tanks and I like playing the Germans.  I'm also sensible enough to realize that you need a balanced Kampfgruppe to take on whatever fate throws your way.  I guessed, incorrectly, that Ken was going to be taking tanks since this was a battle on the outskirts and not inside the city.  This is an intelligence failure of the highest order.  Once again, the Abwehr was wrong!!!

Ken took a full strength infantry rifle battalion of 56 infantry teams along with maxim machine guns and 2 x Batteries of 122mm Howitzers in support.  THATS IT!  That's all!  Ken's logic was that the infantry fighting is more interesting, challenging, and I think unexpected.  Boy was he right about that!

My force was very balanced. looking for infantry to take buildings, and tanks to make rapid thrusts and kill enemy tanks, I selected a Panzer III company of 2 Panzer III Up Armored platoons, a command panzer III, and in support I brought a Panzer Grenadier platoon, a mortar platoon, and an MG34 platoon.  My jaw dropped.  Ken had so much infantry he borrowed a company's worth of mine!

I thought my bringing an 88mm gun along would "surprise" Ken, who, as a Soviet commander, wasn't bothered much by it considering he had zero tanks or aircraft!  Anyways, my tanks and war-weary Landers will have to get to work.  I'm going to focus on the forest objective and try to kill enough stands to push Ken back.  That's the plan, anyways... 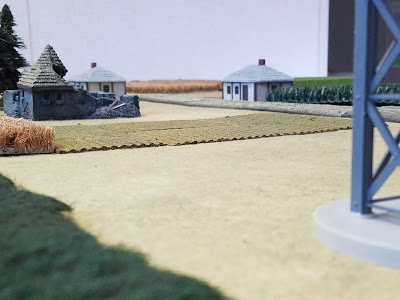 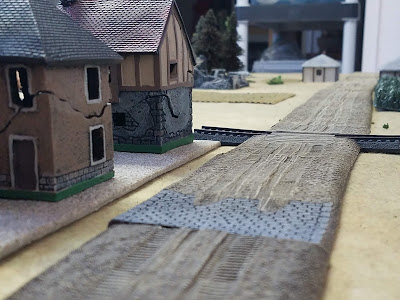 As we get into the first turn, my Panzers start earning their pay knocking out Soviet teams dug-in in the wood-line with HE fire and machine gun fire.  The mortars start coughing out rounds, spotted for by the Company Commander, and the Landsers start to move up through the cornfield - then disaster strikes.  Ken has his HMGs - Maxims to be precise and 2 in each company - trained on the open ground in the center of the battlefield.  His shooting takes out stand after stand after stand of Schmidt's platoon!!  My stomach turns as my only infantry platoon is cut to ribbons!

My infantry platoon in the cornfield fall back to the hill and will go on to fail their "last stand" test with only 2 of 7 teams remaining.  The Panzers will have to do the heavy lifting.  I push them closer to the infantry and start pumping HE and machine gun rounds into the woods.  It's like whack-a-mole - one team is taken out, and another takes its place.  The Soviets have an endless supply of them on the table!  Still - the work continues! 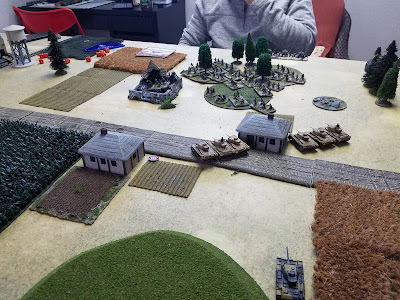 I get a lucky break when 3 of Ken's teams fail their save and miraculously, I roll 3 "6s" in my firepower tests.  The HMG crew is left in the front wood copse along with the company commander directing his fire. 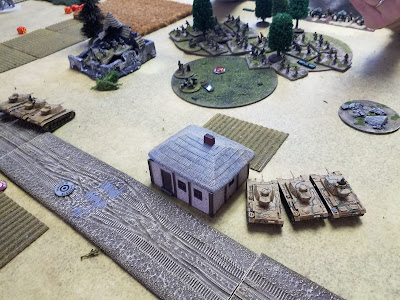 I start to think about overrunning the HMG section with my tanks and using them as a sort of giant "fruit squishing" machine atop the Soviet infantry, pivot-steering over the foxholes.  It's effective enough.  I easily pass the skill check and the best Ken's infantry can do - he does not have anti tank rifles - is bail me and hope I fail my counterattack check.   If I fall back from assault combat with a bailed tank, it's destroyed. 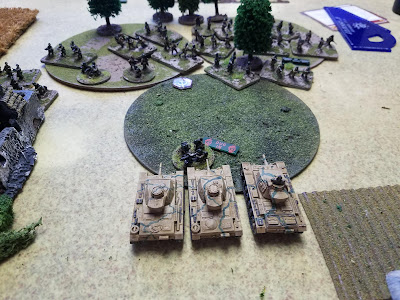 After clearing out the woods, I maneuver the tanks next turn to contest the objective.  It's tough work but I have the movement to do it and I charge in with all of my tanks to clear out Ken's infantry.  I find that I can assault his more exposed elements, and the supporting teams are then pushed back.  If I can win this round, I might be able to capture the objective - the ruined farmstead - and win the game! 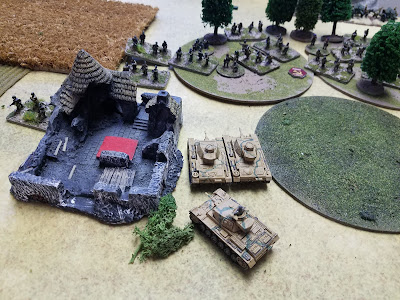 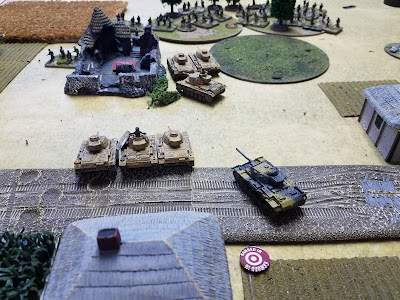 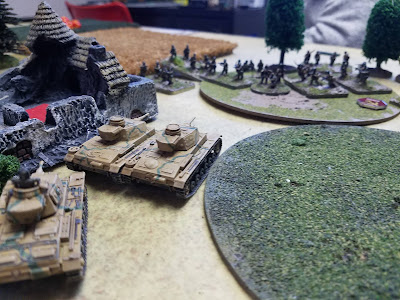 Ken decides to leave half of his infantry company in the town "out of command" and guarding the train station objective there, and maneuver them into my flank.  It's a really good move and I train more guns, MGs, and my mortars on the advancing Ivans.  It's a turkey shoot on them as they are not in bulletproof cover but they did their job effectively by taking more of the shooting away from their comrades.  If Ken would have maneuvered them 2 turns earlier, the game would have been lost for sure! 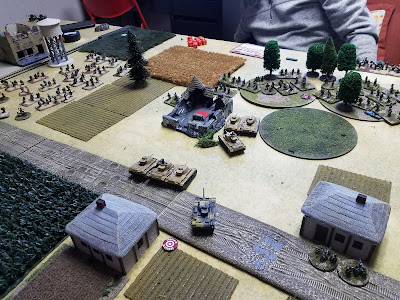 The assaulting panzer III company does get a little greedy and I push into the woods to push Ken's infantry back even furhter - although this time one of my skill checks fails and leaves Ken with a viable infantry team to counter-attack which he does.  While the attack fails, I end up failing my morale check to counter-counter attack Ken!  The panzer IIIs fall back out of the woods - but the damage is done? 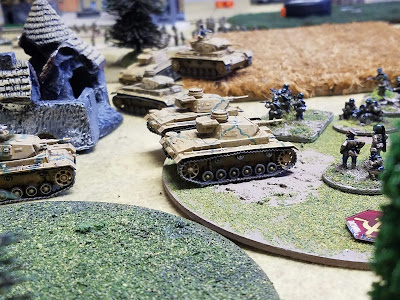 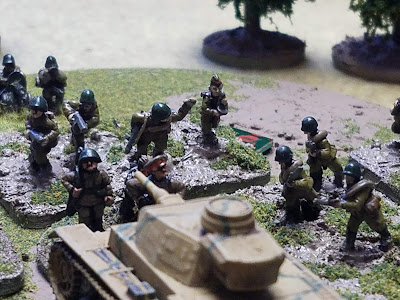 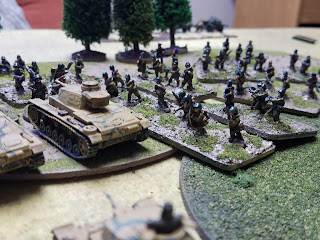 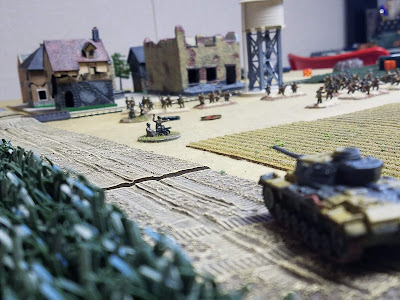 WOW this was a great fight - and no shortage of tension, excitement and action.  When I lost my infantry platoon, I thought the game was up - but when I overran the HMG section, I realized there was another aspect I was forgetting about - overrun combat and it worked well.  I do think I could have used my troops a little bit smarter and kept my infantry more secure before - losing a platoon like that is pretty inexcusable but I definitely learned for next time!  Speaking of next time, now I will push into the city and we'll fight one of the really cool urban battles that are in the Army books (the factory, the boulevard, the house, you get the idea!).

Another "controversial" rules choice in so many days, but again, these rules are great fun and present an opportunity to get all of my toys out onto the table and play to completion in a modest amount of time and that's pretty cool.  Going to finish my German assault Pioniere platoon for the city battles coming up!  Flamethrowers and demo charges!!!

More gaming and blogging coming up, so stay tuned!

Posted by Disgruntled Fusilier at 9:01 PM