A dearth of gaming this summer but we carved out some time for a small-ish game (American vrs German, 350 points, 23-26 breakpoints) of Battlegroup at Ken's house with his excellent 20mm kit and terrain. 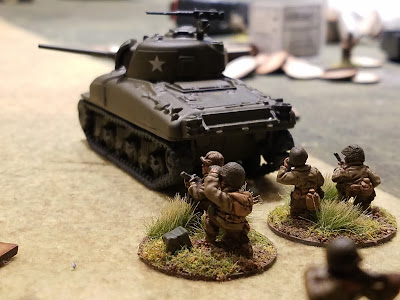 The scenario chosen was the "Recce Screen" scenario from the Overlord book and featured a reinforced American platoon trying to outflank the heavy defenses at Isigny, in France.  Elements of Company A, 1st Battalion, 115th Infantry are on the move and American forces are keeping the pressure on the Germans in the drive across the hedgerows of Normandy.

The Germans also have a reinforced Kampfgruppe with recce, an infantry platoon, and a Stug, along with a battery of 105mm artillery in support.  With no shortage of firepower, the Germans lacked for nothing in this game except good luck.

THe recon phase was an unfortunate 6 turns long- unfortunate because the Americans (Ken and I) skimped on our recon units, choosing a single sniper and a jeep.  Dave's recce force included a 222 Armored Car with a nasty 20mm Auto Cannon, a fusilier squad consisting of an LMG section and a rifle section - 3 units in all - the Americans were "out scouted" and forced to take a chit before the first turn even started! 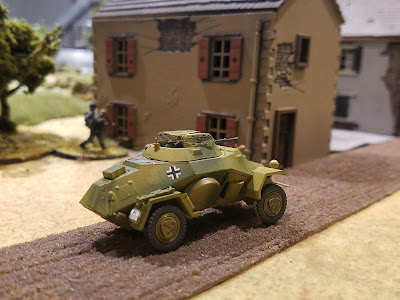 Dave pushed all of his recce troops up to the farm and the 222 immediately opens fire on the jeep, missing it.  Dave bags the center objective at the farm, causing another US chit pull.  Amazingly, it's a "BREAKDOWN" chit and I play it on the 222.  Dave rolls a 6, which is a catastrophic breakdown.  The 222 catches fire and is a total loss.  Dave pulls a chit now!  Then, on our turn, the jeep bags the objective on the American side and Dave pulls another chit.  Things are NOT going the Germans' way!

Ken orders me to place the jeep and its .30 cal MMG on "ambush fire" and just in time as Dave's recce section at the farmhouse attempts to open fire on the jeep, we pre-empt him and fire on the LMG crew, pinning it and forcing a casualty.

By the time the scout battle is over, (Turn 6) Dave's reinforcements march onto the table, singing in traditional German fashion, led by the Stug, who is looking for payback after the destruction of the 222.

Dave pushes the Stug up to the farmhouse, and the infantry fan out behind it, looking to move down into the fields around the house, and also occupy the farm itself.  Dave ensures he brings the FO onto the table to try and call down some pain on the advancing US force but he is not and will not get the orders to do it.  You need an order for the Call for FIre, and an order for each gun.

I push the tanks up quick and they immediately get into trouble without supporting infantry.  The Sherman crosses the hedges and takes an "ambush" panzerfaust shot right in the kisser.  Amazingly, Dave rolls "snake eyes" and the Sherman is immobilized.  A mobility kill but he's still in this fight!

The  immobilized Sherman next to the farm house starts bringing the hurt onto the German section in the house and pumps HE round after HE round into the house, knocking out ANOTHER German team.  Things are not going the Germans' way this game.  We also end up pulling an Aircraft Chit, and a P-47 Thunderbolt comes in firing rockets at some advancing German infantry, killing 2.  This was a very lucky day for the Americans and a very unlucky day for the Germans.  I dont think I've ever played such a one-sided game of Battlegroup before!
Dave maneuvers the Stug up but is now facing 2 Shermans and I'm continuing to reinforce the treeline as the Americans file onto the battlefield.  This could be the big break that high command needs to breakout of Normandy!
A lucky shot by the Sherman and a high roll on the kill roll knocks out the Stug at the farmhouse and Dave threw in the towel at this point.  I was a bit disappointed because I wanted to play out the infantry battle, and Dave's regulars were closing in on the farmhouse behind the immobilized Sherman.  He'd have been toast if Gerry wouldn't have left the field.

So that's it.  A quick, brutal game and Dave was getting very close to his breakpoint at 17.  Ken and I were only at 5 at this point and Dave called the game.  The Stug was the centerpiece of his defense and so without it I guess he wanted to break contact.  Poor Dave had about every bad thing that can happen to you in battlegroup happen this game including a bunch of turns where he rolled 1 for his orders, had  a CONFUSION, and a BREAKDOWN chit played against him, and an AIRCRAFT chit played against him (which statistically is somewhat anomalous).  This was a good refresher game but honestly there was much rulebook(s) flipping (BG Rules, BG Overlord books) since we haven't played the game in awhile.  If I'm honest, it was exhausting.  Had we been playing Flames of War, I think the game would have been over much more quickly given our level of familiarity with it, but I definitely want to explore this scenario more with other rules (like Flames of War or Norm's Tigers at Caen or even Rapid Fire).
This would be a good contender for the FoW "dustup" scenario which I'd like to try next.  I hope everyone has a great week!  I have lots of AWI on the table at the moment, and more 10mm Eylau painting to do....

Posted by Disgruntled Fusilier at 9:16 PM