In this post, more from the Disgruntled Fusilier Academy of Wargame Sciences.

Continuing on with the theme of late for me, is my experiment with the "First Battle" series of rules, which have turned out to be a very enjoyable and simple system to play with.  In my last post on the subject, I talked about how I was trying to find that "big battle" set of WWII or Modern rules to play on a hex grid.  Looking at games like "Command Decision" it seemed like I could reverse engineer to serve as a satisfying "hybrid" miniatures and board game type system which could handle bigger battles.

Further research led me back to the "First Battle" series which seem to be a predecessor, at least philosophically, to Command Decision, in a number of ways (and another popular rules set on the market which we'll discuss in a later post!)

One of the facets of the First Battle system I wanted to tinker with was to make it feel less like a boardgame (but still, sort of, like a board game....) and able to accept miniatures and feel like a miniatures game.  A caveat was to still use the counter information for the elements on the table.

I took the combat results table (CRT) apart and came up with some probabilities (as Norm calls it - "the maths") for every combat scenario for the limited units available in the 1987 "Team Yankee" game. The result gave me an average of achieving an effect, any effect, on a target.  This became my "To Hit" roll.  To me, I do like a miniatures game that has a "To Hit" and "To Kill" roll for modern and even WWII engagements.  (think of the Squad Leader board game armor engagement system and that's what I am talking about).

Instead of changing anything from the 1987 "Team Yankee" board game, I simply looked at the probabilities on the CRT for creating a "kill" result at each ratio, then what it would take to achieve a "Damage" or "Pinned" effect.  The result is the exact same probability but expanded to a 2D6 roll.  So now, you can still achieve a "hit" but a "no effect" from your hit and it doesn't feel quite like a CRT.  I do acknowledge that the addition of a "To Hit" roll adds its own trouble to the odds of achieving a kill or a damage/pinned result, but I wanted it in there anyways, if anything to feel more like a minis game.

To do this, you'd still have to compare Gun/Missile performance with the "Defense" score or armor, but it felt a bit more like "Squad Leader" now, and less like a pure board game.  The resulting table looks a bit easier on the eyes than the old CRT we know and love.  Take a look:

The "To Hit" roll is easy to calculate - if the target is half of effective range or less in hexes, it's Close (requiring a 3+ to hit).  Effective is a 4+.  Double effective range is a 5+ to hit.  Terrain does not impact the To-Hit roll but I'm glad you asked that question😁

In the basic "Team Yankee" boardgame, woods and town add a +3 to the defense value of the target.  In most cases this resulted in a column shift so that's exactly what we'll do.  Instead of adding/subtracting, terrain enables a single column shift to the left.

How Did it Play?

So this is all well and good, but how did the playtest go?  I put down the old, reliable "To the Rescue!" scenario on the table again and tried it out, but with Soviet forces approaching from the East, rather than the North.

This time the Soviets are approaching in an abreast line with a platoon of T-72A main battle tanks, and a platoon of mechanized infantry mounted in 3 x BMP-1s.  They're going after the last remaining elements of an Armored Cavalry Regiment's covering force consisting of 2 x M3 Bradley Cavalry Fighting Vehicles and 2 x Infantry teams.  On the way to the rescue are a section of 2 x M1 main battle tanks who will show up on Turn 2.
The big difference in my plan for the US forces is to start with all my troopers dismounted.  This will enable them to occupy "firing positions" (AKA go on overwatch) from the start.  The village is bristling with anti tank guided missiles now!
Turn 1
The Soviets come on moving fast.  Since both US elements on the eastern flank of the village have fired, they're automatically spotted.  They engage a Bradley in the town, first with the low velocity gun from the BMP, and then from the 125mm tank gun from the T-72.  The Bradley is hit and then killed.  To the South, the other T-72s focus on suppressing or neutralizing the infantry team who fired at their comrades.

The Soviets with the initiative opt to go first on turn 2, capitalizing on the success of the knocked out bradley, the Soviet officer in charge orders the BMPs to close the distance, fast!  They careen across the open fields bouncing into the furrows and culverts but the distance is closed without a shot being fired from the village.  It's a "close" shot and the dragon needs a 3+.  It hits!  The shot is easily on the 5:1 chart and the BMP is sliced open by the Dragon.  The infantry team inside survives the hit and bails, running into a nearby house.

The Soviet T-72s to the south of the creek hold their position going on "overwatch" since their commander read the scenario and knows there will be M1s approaching from the south...Remarkably, the M1s join the battle and charge in, guns blazing!  they charge up the road and turn off, trying to engage the T-72s.  Not a smart move!  The M1s are knocked out one by one before they have a chance to fire.  Was it a good move to charge them in?  Definitely not.  The M1s easily outrange the T-72 so they should have hung back but this is a playtest, anyways.

The Americans, watching the M1s to the south get knocked out, are on their last legs.  Their attacks against the Soviet forces have been ineffective this turn since the destruction of the BMP on Turn 2 with the dragons. 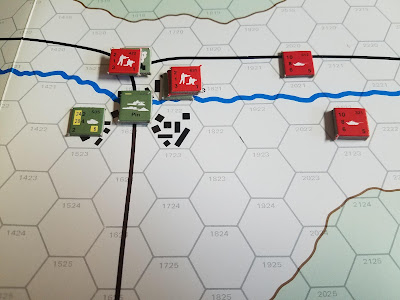 Well that was fun.  The To-Hit roll adds a bit of fun to the system and it doesn't really feel any different.  True there is another layer of rolling, but it's not hard to discern the range to the target and frankly, the uncertainty created by the To Hit roll adds a nice element of tension to the game, which was somewhat predictable beforehand.  An TOW missile from the Bradley is very likely going to kill a BMP, but what if the shot misses?  Anyways this game saw a bunch of disappointing misses from US and Soviets alike.

Comparing the Gun/Armor values is a bit tedious but it's not too bad.  If you're at close range, you're automatically going to double a gun attack value.  So you know to do that already.  Overall I didn't see anything lacking, or "broken" from playing the game this way, which I fully intend to do more of, but with miniatures.  This game felt much more like a miniatures battle and certainly drew some comparisons to other WWII and Modern games I've played.

My next step is to make a comprehensive QRS that you can play directly off which includes the vehicle and troop values on it.  I also want to play with artillery and morale rules next.  Then integrate airpower.  This should roughly work for the WWII variants as well, which are a bit more nuanced with the terrain rules, but overall are the same.

As I was dissecting the CRT for Team Yankee 1987, I noticed a big similarity to another game system - Fistful of TOWS 3, at least in terms of the "basic" Sequence of Play, the concept of the "Firing Position" or "Overwatch", and the odds of causing an effect on the target.  FFT3 needs a 4+ To Hit that is affected by range and /or troop quality so that the majority of engagements' To Hit rolls turn out to be a 3+, 4+, or 5+!

The To-Kill roll is slightly different, but is done via a comparison of Armor to Gun Penetration results.  Instead of a single roll, the resulting difference in Gun to Armor equals the number of D6 you roll to penetrate, with each "6" killing outright, and a 4 or 5 forcing a "quality check".  The math just looks incredibly similar to the First Battle System and I want to explore those similarities in a future post.  FFT3 looks like a great candidate for hex-based, WWII big battle rules, potentially even using the First Battle scenarios from Sands of War, and Blood and Thunder.

And speaking of future posts, Im doing more work on my "Big Battle" Tricorne and Napoleonic rules to hone those and get them ready for primetime.  I've also been re-reading the Black Powder rules, and have been writing down more thoughts on low-level WWII fighting and rules I want to play.

I plan on posting on those thoughts in the future, and my Biazza Ridge scenario for Battlegroup is almost ready to be posted and play-tested!

For some long-term posts, with current events I've rekindled an interest in post-apocalyptic gaming and have been looking at Twilight 2000 for a potential skirmish campaign.  In other fronts, and need to get my Ancients forces rebased to get them on the table, and have a mind to rebase my 10mm fantasy forces.  Stay tuned!

Posted by Disgruntled Fusilier at 11:18 AM