Ravenfeast Disaster: BACK TO THE BOATS!

Ken and I played our first games of Ravenfeast this past Sunday and the game did not disappoint!  I called the post "Ravenfeast Disaster" more for what happened to my mighty Viking warband than anything else.

Over the past month or so, Ken and I were prepping 28mm Dark Age Vikings and Saxons for our first Ravenfeast showdown which finally occurred this past weekend.  Our original goal was to have everything painted by "Late June" so that checked a major project accomplishment box on my list.  I now have 36 warrior Danes and 3 command figures, all from Victrix, painted up.  Selecting a date, Ken and I were ready for the showdown and the only thing missing was the scenario.

Foolishly, I picked a doozy of a scenario - the "back to the boats!" scenario which pits a 300 point raiding force trying to escape to the safety of the coast, against a 500 point ambushing force.

Talk about trial by fire!  Ken brought his awesome-looking hordes of Gripping Beast Saxons which looked like children fighting against grown men (the Victrix are closer to 30mm's tall and the GB figures are 25-28mm) - my Vikings looked like massive, Salmon-fed beasts compared to the waifish, grain-fed Saxons.

Anyways we played through the scenario and I have to admit I completely underestimated the decisions that had to be made and the tactical finesse required to be successful in Ravenfeast.  Rather than a simple "hack and slash" game, Ravenfeast requires some planning (and luck) to be successful, especially against an enemy that outnumbers you.  There are important decisions to be made.  Let's get to it.

My Vikings along the road to the coast spot a Saxon Ambush!  I break them down into smaller tactical sub groups each with an archer, while my Bondi spearmen surge forward with the Jarl (commander).  This tactic worked pretty decently but my rolling was crap - not killing a Saxon this entire first game.  Seriously - a game that finally requires "1"s to be successful and I roll more "6"s than I ever have in my life.

This game seriously started to remind me of an American football game where a lane needed to be created for a running back to carry the ball down the field.  While my brave but tiny and expensive tactical groups were slaughtered by Ken's cunning Saxons, the Jarl, Berzerker, and a few spearmen make off with the loot, only to run too close to another advancing brace of Saxons and are surrounded and cut down, slaughtered to a man.  My rolling ensured that I killed ZERO Saxons.  Every one of Ken's men were "Veteran Fyrd" and so his quality was not bad compared to my crappy spearmen and archers...  Anyways, Ken employed a tactic whereby he would run a few Saxons around a Viking already locked in close combat and finish him off, ensuring that not only did I lose a point on the D6 during defense, but also during my attacks.  The rest became simple numbers.  (forming a shieldwall helps mitigate this tactic to a certain extent) 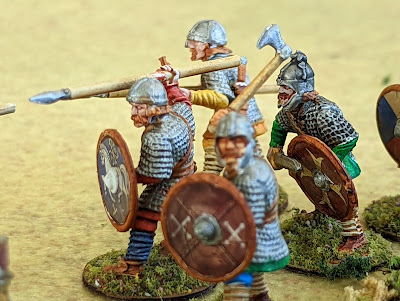 We re-racked the forces and started again.  You quickly realize the value of a shieldwall (increase defense by 2) but the raiders need to MOVE!  Huge decision.  Do you trade solid defense for speed?  Or break down and run for the coast?  I tried out the Shieldwall and while I finally killed a bunch of Saxons, the end was still the same.  In fact I died further from the coast during this game!

My thoughts about Ravenfeast are that it does indeed deliver on the hack and slash feel that you're looking for after binge-watching "The Last Kingdom" but there is so much more to it than just the combats.  You must plan ahead and try to anticipate what the enemy will do.  When and where to form a shieldwall is critical in light of your objectives.  You also have to be ruthless and sacrifice men to the greatest extent possible.  The whole thing feels very genuine and to be completely honest even though I lost both games, was an absolute blast.  We're both looking forward to playing again. 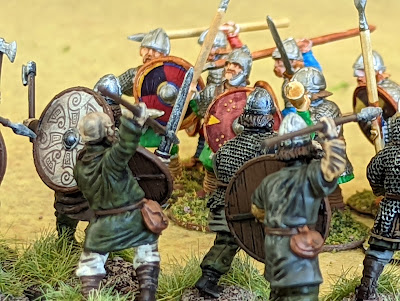 So that's it - we really enjoyed Ravenfeast and are looking forward to playing again.  A key thing to remember?  Dont spend too many points on expensive troops, especially if said troops make up 50% or more of your force!  (like in this game).  I should have had way more Bondi spearmen as fodder, perhaps led by a hero in each case.  The trick is speed to get your Jarl back to the boat!

I'll finish this post with some gratuitous pictures of my warbands! 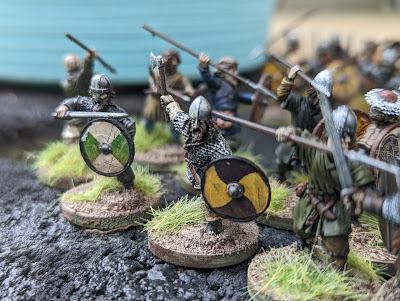 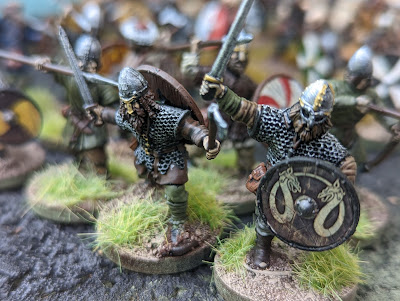 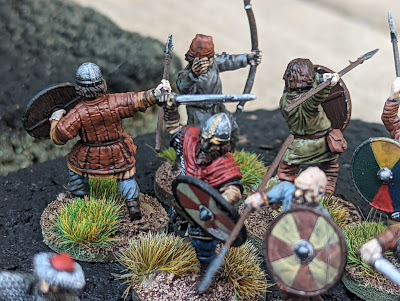 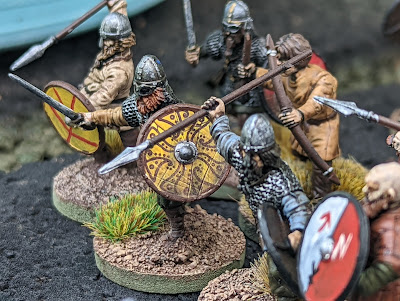 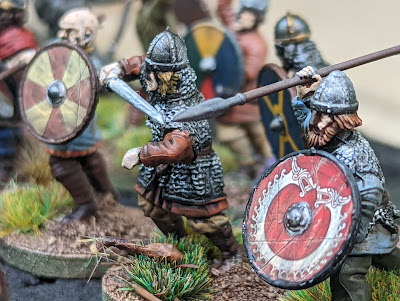 Posted by Disgruntled Fusilier at 1:51 PM