Yes you read that right.  Dipping my toes into, a new scale for me.  I vowed I'd never do 28mm or start a new scale for that matter, with my beloved 10mm, 15mm, and 1/285 MicroArmor serving as staple scales.  That being said, I've been enamored with the free Ravenfeast Viking skirmish rules by the LittlewarsTV crew and picked up a print copy of Ravenfeast for free at the last convention I attended.

My original intent was to play Ravenfeast on the cheap in glorious 15mm a la "Storm of Steel Wargaming" but Ken insisted we play in 28mm (he has a good sized collection of Dark Age figures).  A few mouse clicks on the Victrix site and their 60-figure bag of Danes and along with a bag of Dark Age Archers arrived speedily from the UK.

Ultimately this works out because I'll base my 15mm Saxons and Vikings on 40mm square bases and play Hail Caesar or even try my luck with "Big Battle Ravenfeast".

Anyways, I'm sure you're not here to see my future plans, but rather for the eye candy!  Be gentle, this is my first real foray into 28mm painting!  I'm quite happy with them so far.

So far I have 2 x full warbands completed.  I'll knock out a third one and that should give me enough points for a 350-400 point game. 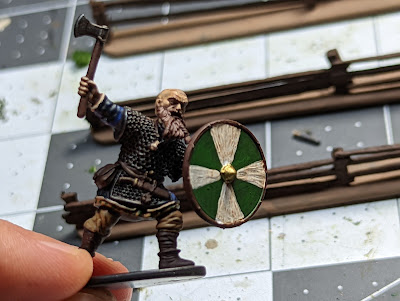 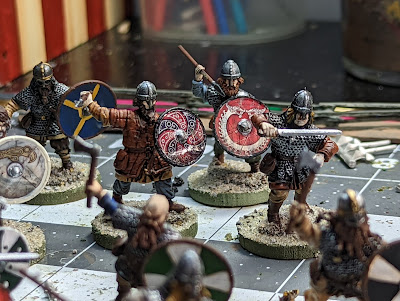 So that's it.  I still have about a few more Vikings to paint but I'm chugging along with my painting.  28mm is quite different from the mass-production I'm normally used to with 10mm or 15mm.  I can very quickly paint one of these guys up in an evening, and Ken and I have committed to playing a game mid to late June.

Speaking of plans, lots of ACW coming up on the horizon.  I'm going to try to play Live Free or Die set in the ACW like the most recent Littlewars TV Battle of Seven Pines, and I'm working on sorting out a scenario for Altar of Freedom for the first day of Gettysburg.  Lots of exciting ACW action coming up!

Since we're full of surprises today too, I picked up a few boxes of HaT 28mm El Cid Spanish to play "Soldiers of God" with Ken.  Readers of the blog will recall we played "Soldiers of Rome" this past winter and loved it!  The wife, who is Portuguese, naturally acquiesced to me fighting in the Reconquista!!  God Wills It!!!!

Posted by Disgruntled Fusilier at 7:21 PM