Having played a web-sourced version of Panzerblitz in miniature I thought I'd try out my own version which was easy enough.  It plays exactly like the board game because I used the board game rules and 3" "sabots" that were originally made for Volley & Bayonet.

This game pitted a Canadian task force of 5 infantry platoons, a platoon of Sherman tanks, and a Platoon of "SPGs" (that's for you, Paul F) against a German reinforced company of 3 platoons, a split up weapons platoon, a Panther platoon, and of course heavy artillery in the form of 2 Wespe 105mm platoons.  Unrealistic?  Perhaps but I wanted to use the models naturally.

Instead of looking things up on the tables, I simply plopped the unit chit down on the base.  This (to me, anyways) had a visually appealing aspect to it.  So all you guys who want to play SQUAD LEADER in miniature and are afraid of cluttering the table, consider big "sabot" bases to throw your miniatures on.  You can affix the unit chits right to the base as it's convenient and it "looks cool."

The M10 didn't fare well the entire game with it firing on the Panther platoon in the first turn and not making much headway after that.  The Panther pretty much kept him "disorganized" the entire game until a good roll knocked him out completely.  Anyways back to the action! 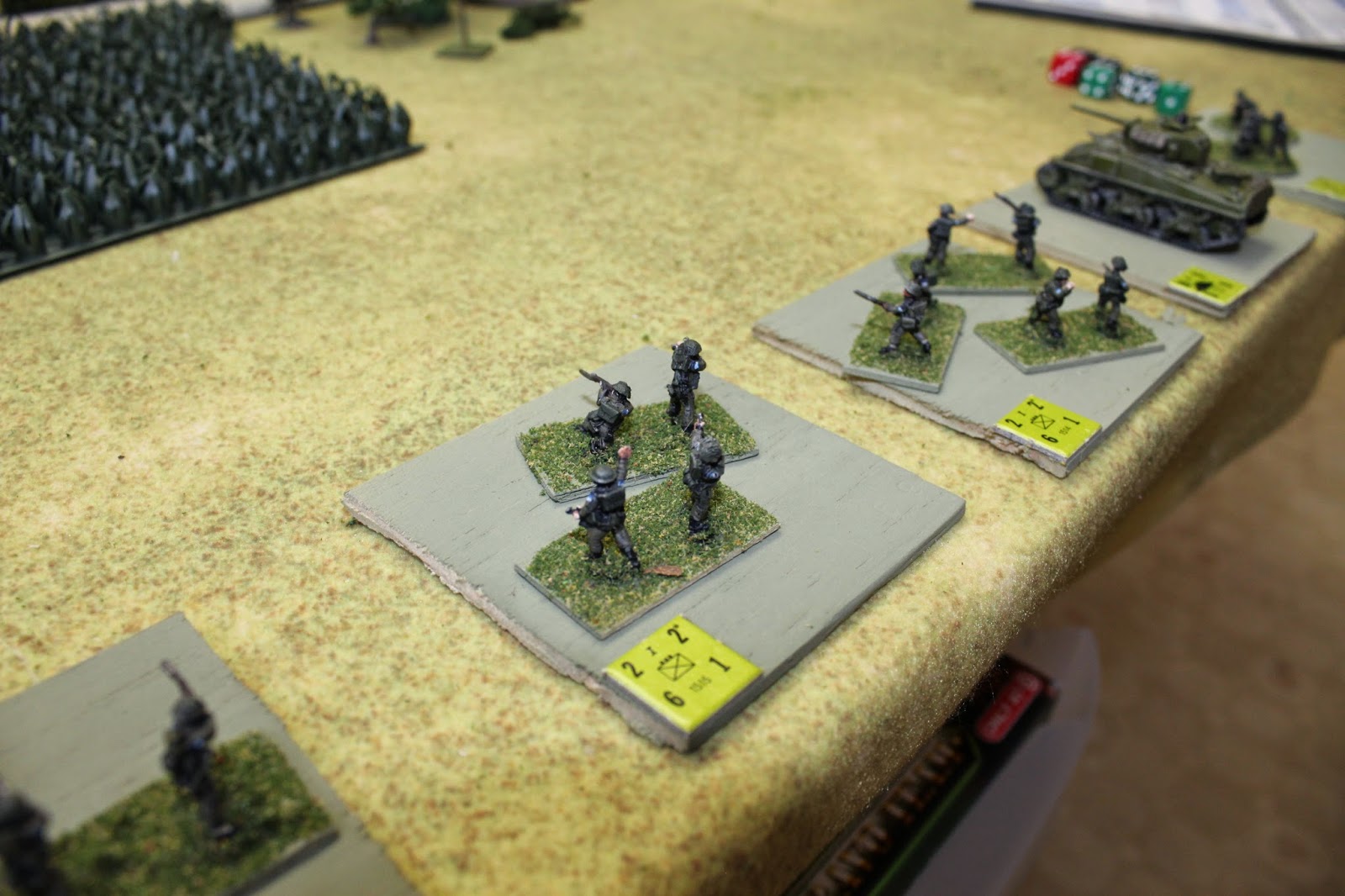 The Canadians are charged with seizing this fortified German position.  They have no artillery and no air support and HQs has decreed that this attack will go "right up the middle."

The infantry on foot make slow progress and the tanks of course move up to the forward edge of the battle area to engage targets.  It's a bad move as the town area and farm is crawling with Germans and of course observers for the big guns to the rear.

German artillery fires on an exposed Canadian platoon on the end of the line caught in the open and cause such horrendous casualties that it's curtains for these guys.


The Canadians, having moved their armor up without the infantry close behind are starting to fend off German infantry.  Unfortunately for them, spotters in the town call in 80 barrage points worth of heavy artillery on them.  Even though it's rounded down, the ratio all but guarantees a kill against our stalwart Canadian attackers, unless Gerry rolls a "6" (+1 for being in the woods) which he doesn't.

Following the untimely demise of the Sherman platoon, the Canadians reach the edge of the crop-field and begin to take up firing positions to attack the dug in German company.  Meanwhile, the Germans send a platoon along with the heavy weapons section (HMG/MMG) to flank the Canadians.  The cornfield will become a killing field unless they can advance out of there! 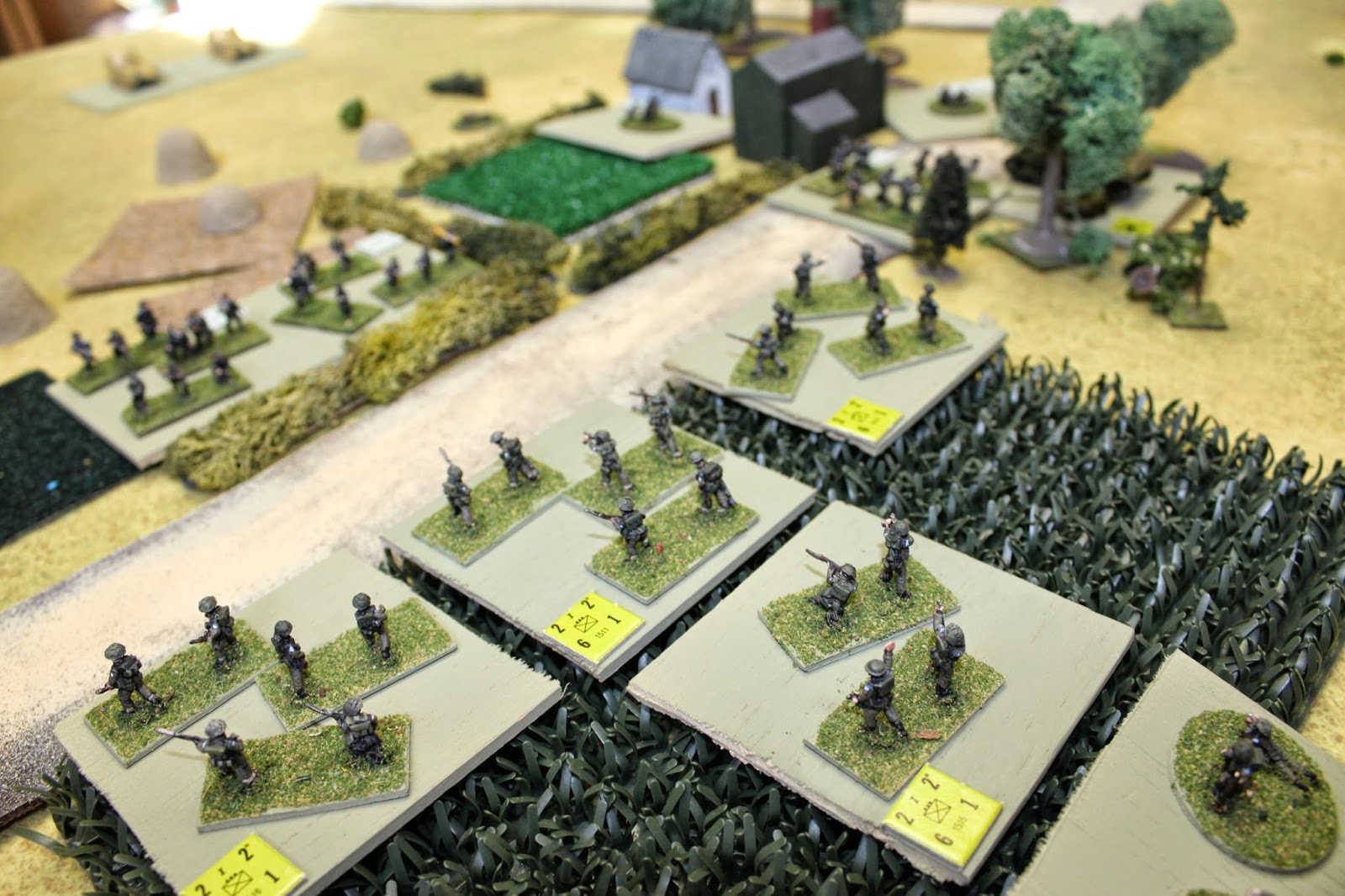 Fun game.  I have always loved the Panzerblitz, Panzerleader and Arab-Israeli Wars board games and this one was especially fun.  I think I am going to try actually playing out the scenarios that accompany the board games and see how they go.

Tune in this weekend to see if our intrepid Canadians can carry the position against all odds!  The infantry action is heating up on Sound Officers Call!

If you happen to be a micro armor person, this game might be even more appealing to you, as you can put 2 - 4 tanks on a base and have an actual platoon.  As for me, big 3" sabots work perfectly fine as I'm using 15mm stuff.  Here are some painful lessons I've relearned about Panzerleader:

Anyways that's all for now.  Short but fun game.  Let me know your thoughts - especially you "die hard" board wargamers!
Posted by Disgruntled Fusilier at 3:58 PM