Here and there I've been playing a round or two at a time of my Peach Orchard scenario for Black Powder with some interesting observations and some unusual turns of events. (to me, that's NOT a good thing).

During the actual battle, Barksdale's Mississippians charged with such fury, they cut through almost every Regiment they came into contact with.  This game had some different twists.  In order to give them the proper amount of "gusto," I gave them the "ferocious charge" special rule and any Regiment they charged had to pass a break test prior to even delivering closing fire.

The attack stepped off OK enough, with 1 Regiment out of contact on the Confederate right.  They had to roll a different order with negative modifiers, but still with Barksdale's "9" staff rating, they managed to keep up.


The rebels upon reaching the road halted and began a fierce firefight with the yankees.  I actually ran out of casualty markers things got so ugly.


The obstacle of the fence along the Emmittsburg road presented something of a challenge, costing half movement to cross over.  Lucky for the Confederates, they rolled well and were able to cross, advance, then charge right into the blue-belly ranks.

Kershaw's South Carolinians arrive on the field in time to maul De Trobiand's lone Michigan regiment guarding the left flank of the Peach Orchard.  I ran out of infantry so I had to use cavalry dismounts to model them! 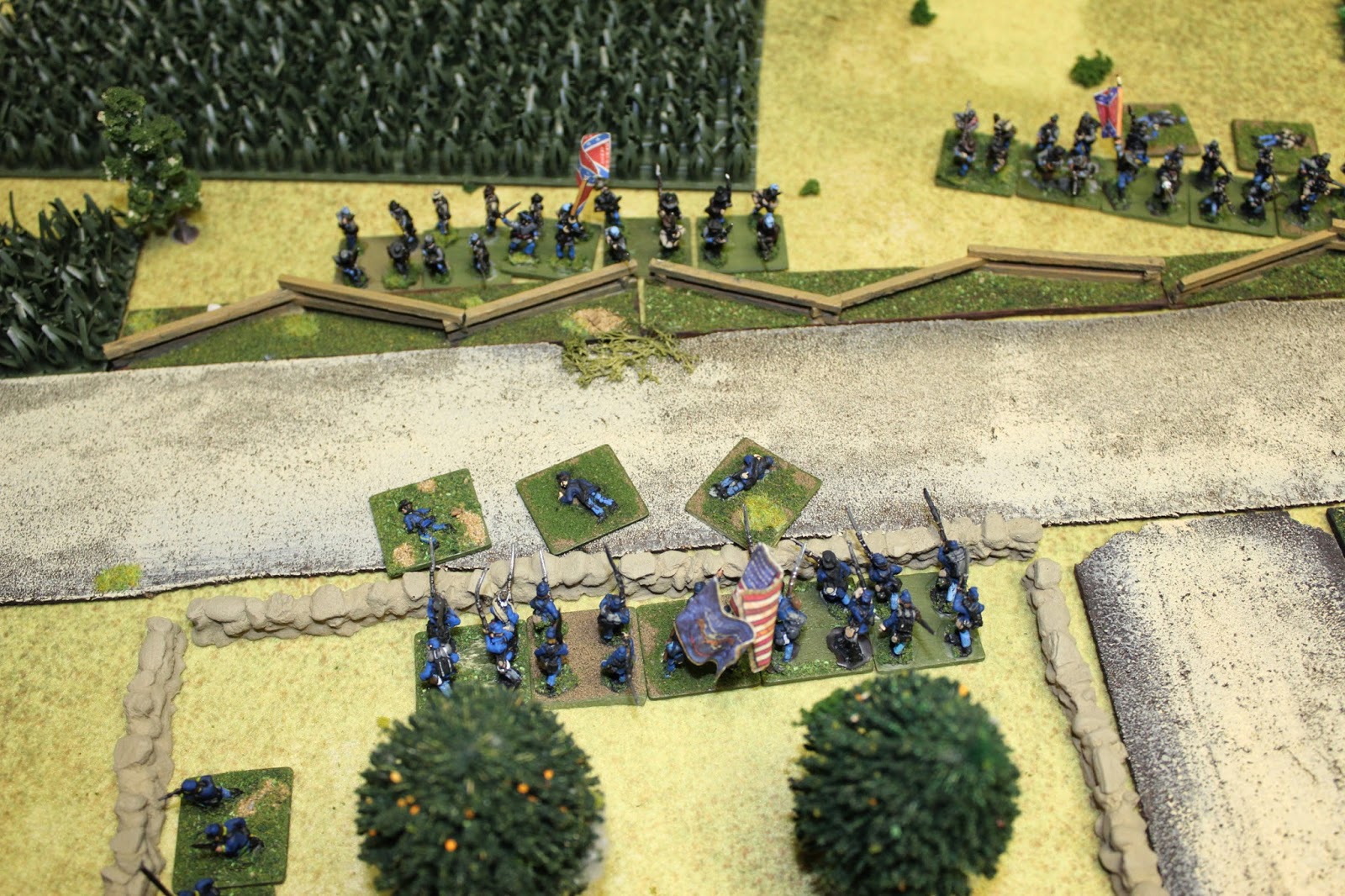 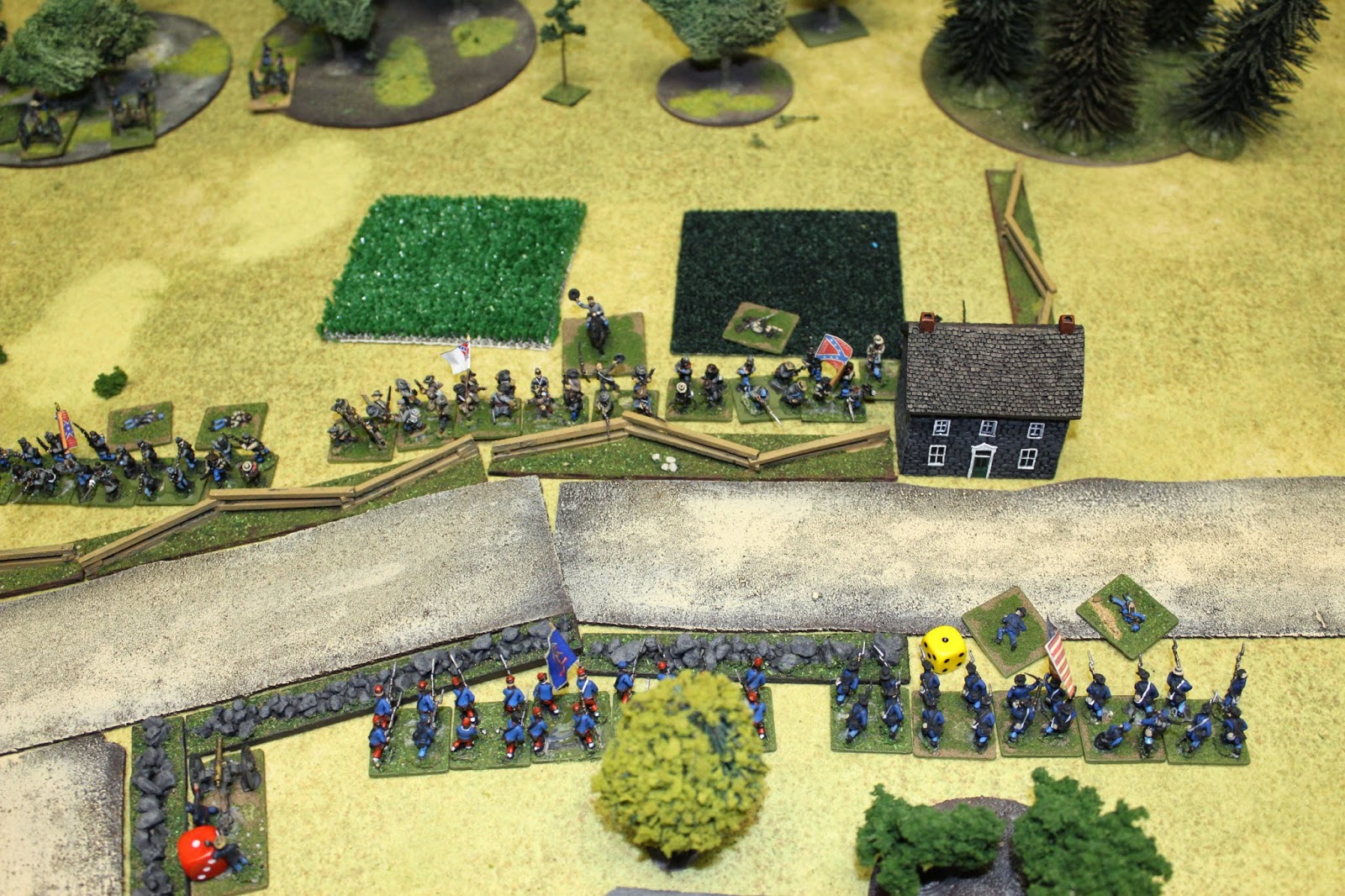 The Rebel charge goes in, with all Yankee units taking their break test in terror of Barksdale's howling banshees.  The right-most PA Regiment (already at their 3 hits/casualties, and disordered) evaporates after rolling a "3" and the Rebels march right through their position.  This forces a reserve Regiment to wheel around, refusing the brigade's right flank.


The Rebel assault against the Peach Orchard is successful and the 68th Pennsylvania melts away into history.  The Peach Orchard itself, save for a lone Michigan Regiment will be in Rebel hands by turn's end.  The Wentz property, however, is still a formidable position held by III Corps.


So while the Peach Orchard attack goes in successfully, only half of Barksdale's men are successful in securing a toe-hold on the Wentz property and have now lost 1 Regiment in the attack.  The yanks refuse a flank and have more reserve units to throw in if necessary, including a 3" Battery.  Meade would be furious!

So the fight for the actual Peach Orchard is over and the fight to push out Graham's Pennsylvania Brigade is on.  With 2 Artillery Batteries in position, and 2 fresh Regiments, it's going to be an even tougher time for the rebels to push them out.  This is Civil War combat at its most brutal! 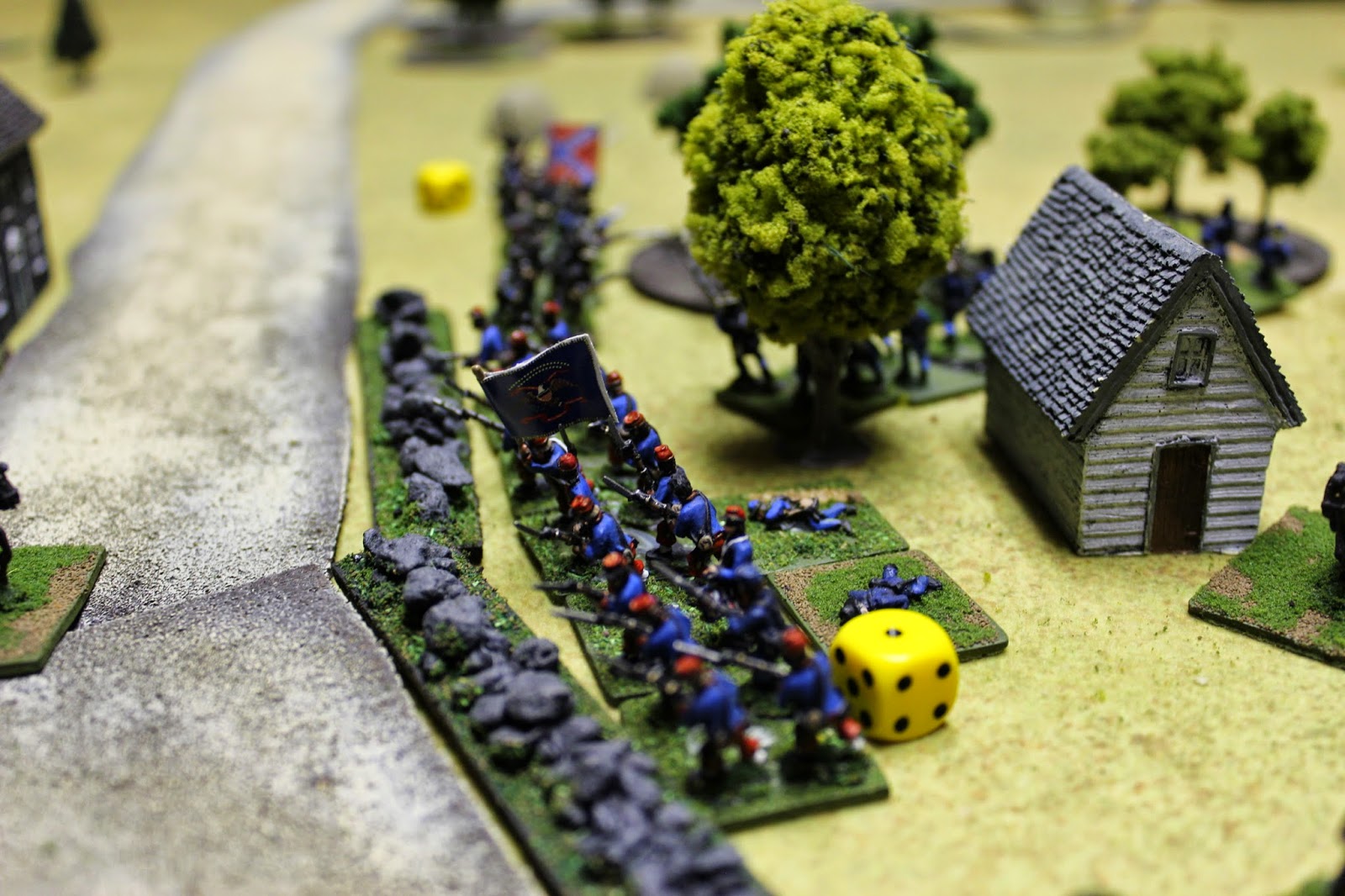 Well it's not the most historically accurate battle I've ever participated in, but it's not bad.  It wouldn't have been much fun if all Barksdale's men did was brush the Yanks aside.  Still though, the ultimate gauge of a rules set is delivering somewhat historically accurate results.  Time, and a few more turns will tell how this battle will turn out.

Reading back on some of my past Black Powder battles, the lessons learned must always  be re-learned.  The Rebel artillery should have been brought up along with the infantry to blast away at the defenders.  Close range delivers 3 vital dice and some nasty morale modifiers for artillery.  Something to remember as Barksdale consolidates his position.

Speaking of Barksdale, the loss of his center Regiment tore a nasty hole in the line and now he will have an extremely difficult time coordinating orders.  In fact, most regiments will now suffer -1 or -2 to their orders and no brigade orders allowed, probably for the rest of the game.

The Yankees have the benefit of a consolidated line and have no problem maneuvering troops into position.  Their uncommitted battery, however, will have to commit itself and very soon if they're to have any hope of resisting.

Tune in later this week for Part II!
Posted by Disgruntled Fusilier at 11:28 AM