I pulled out all the stops and grabbed every "destroyed building" I had including some really cool Epic 40k ruins I purchased on ebay a few years back.  They blend in well with the other scenery.  I even sprinkled some ballast rocks to give the impression of rubble.  This was a sweet game but the pictures tell the best story.

Mission was the "Domination" mission from the "boltaction.net" website.   3 Soviet squads plus 3 T-34/76 face off against a similar number of Germans, 2 x Panzer IIIs and 1 Panzer IVF.  This mission has it all - Reserves, plus lots of maneuver and decision making.

Both sides wanted to use their tanks to sweep around and grab as many objectives as they could before the infantry swarmed in.  Still, tanks could only use "advance" orders once they entered the city and I instituted a bog check once the tanks entered.

The Soviets have a new plan.  Shove everyone right up the middle and see how it turns out.  (actually as it turns out, it was quite an effective plan.)

After turn 1, the turns start to move pretty fast.  The first of the reserves show up and sprint into the town on "Run" orders.  Some of the senior officers present have been slacking off on their PT and arrive winded....(this doesn't go unnoticed by the enlisted men).


The Germans in the town remain mostly static waiting for their reserve units to show up and flank the enemy. Movement is slow, however (no running once in the rubble!) and they soak up hit after hit!


I goofed and didn't know I had to pass a morale check until after my squad charges this Russian tank.  I roll the check prior to any combat starting.  The Germans fail it.  Today's not the day to go after a tank.  So back inside the department store they go!


By now it's looking grim for Gerry.  2 of 3 tanks KO'd and even the objectives he started with are melting away.  not to mention the squad in the city center has 8 pins against it!  More than there are even soldiers.  He'll need to roll "snake eyes" to even rally.

The Germans really need another turn to win the game as their reinforcements are finally all set up.  The Soviets have 2 fresh squads ready to rush the "big objective" worth 3 points as well as all their support weapons have been brought to bear. 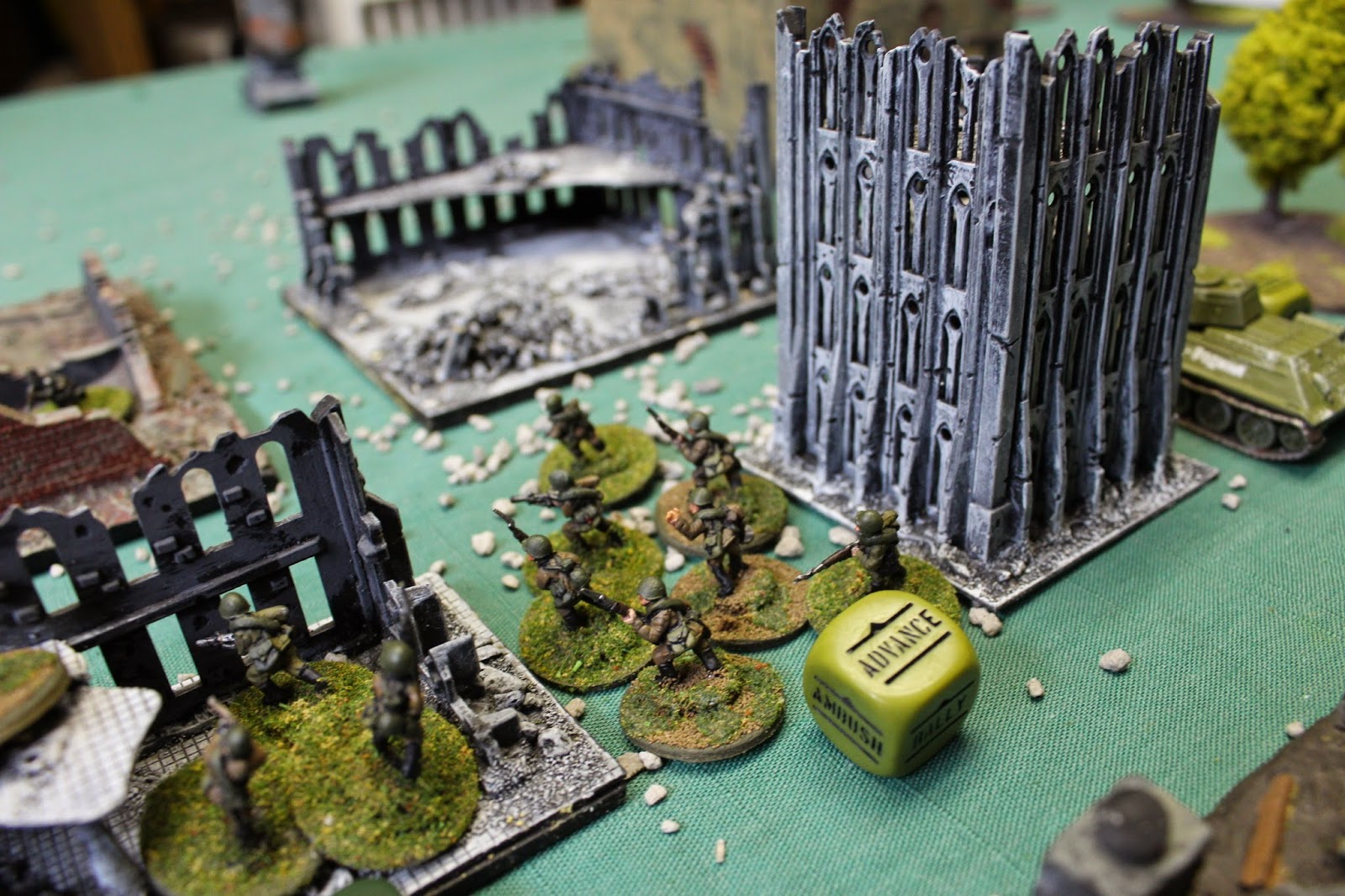 Thanks for sticking around and reading my AAR.  Bolt Action always delivers a fast-moving game.  This time around I didn't institute my "50%" rule where only 50% of the miniatures in your unit may shoot simply because the hard cover and the building to building fighting make it hard enough to hit.  Gone were the turns where one entire squad is wiped out at a time.

Looks like you need lots of terrain to keep Bolt Action interesting.  Duly noted!  I will play this same scenario with FUBAR (the free skirmish rules available in my links section) to see how it goes.

I learned a few lessons here - namely that if you want to keep your troops on the board, you have to keep them in cover.  Shooting is merciless on targets in the open.
Also I finally figured out where officers benefit your units in Bolt Action - because prior to playing this game I could never figure that out, and my officers usually just sat around the battlefield or were used as an additional fire team.

With officers accompanying a squad possibly designated as "the main effort" you increase your chances that they'll pass pre movement morale checks if they're pinned.  Hell, every little bit helps.  9 or less seems like an easy number to roll, but if you have 3 or 4 pin markers on your squad, that turns into a 6 or a 5.  with an officer providing his morale benefit, you can make that roll a little easier perhaps.  My officers all arrived as reserves with the command group, and I found myself wishing they were closer to the action.

Reserve placement.  Reserve placement is very generous and you can almost place them anywhere on your table edge you want.  I enforced a strict entry-area for both sides and all this did was ensure they they almost wouldnt be used for both sides, with most reserves getting their first opportunity to fire around turn 5!

Tank riders.  Do this.  If you have tanks do this.  That's all I can say.  Unparalleled mobility if you don't have tracks or trucks.  The Russians all of a sudden had 2 squads and 2 tanks in the department store sector while the Germans had what equated to a fire team...

Still have lots of painting to do getting ready for my GWOT FUBAR game coming up at the end of the month.  So FUBAR on the way everyone.

Oh and last summer was the "Summer of Horse & Musket" so what's this summer going to be???
Napoleonics?  SYW??  Finally finishing a single project and getting all my minis from that era painted?  "Howe" about the "Summer of the AWI?"
Posted by Disgruntled Fusilier at 11:51 AM