Ken and I played a fairly large game of Team Yankee on Sunday afternoon with 91/92 points (me/him respectively).  My force consisted of an Armored Combat Team with an additional Mech Platoon, M901 TOW section, M163 VADS ADA section, the FIST team, M109 SP Howitzer platoon, and a flight of 2 x A-10 Warthogs.

Brian joined us for a short time and played the US forces with me.  We diced for a random mission and got the "encounter" battle with delayed, scattered reserves.  This scenario could be depicting a large Soviet breakthrough with random US forces being thrown in to stop them.

Needless to say, it was a tense nail biter with the outcome always in question. 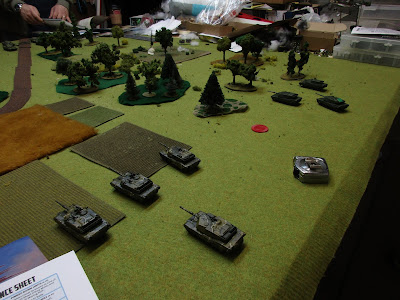 Ken's first Frogfoot strike KO's both of my ITOWs...what's that rule about the time on the board is commensurate with the quality of the paintjob?  Anyways this M901 unit got wiped out - figures - the guys with the best paintjob! 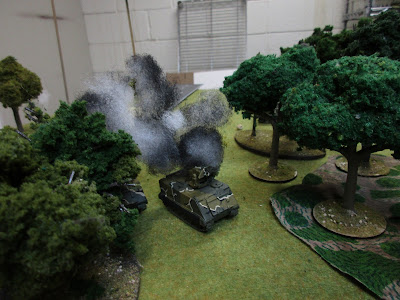 Another turn - another FROGFOOT Sortie as Ken's dice don't disappoint!  He moves in for the kill with both his Artillery and his SU-25s targeting my M1s in the center! 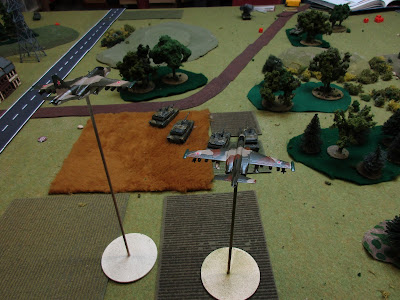 Meanwhile my smaller M1 platoon is sneaking through the woods on the right hoping to get some good shots off.  At first their mission is flank guard.  It then turns into full scale main effort attack. 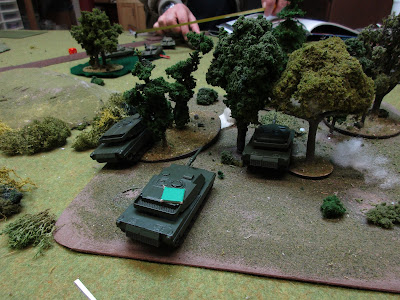 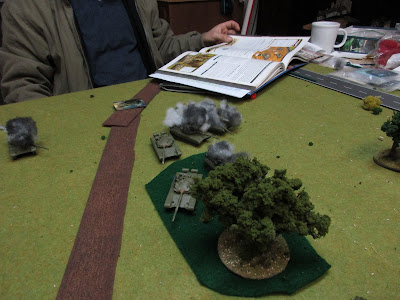 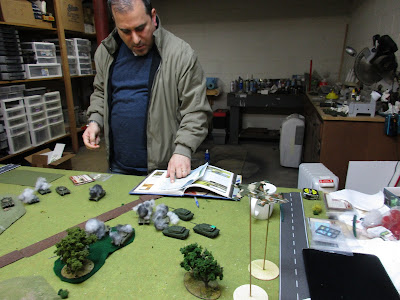 At this point I have an M1 platoon threatening an objective!  Ken's skillful use of his reserves and his Frogfoots here turn an American victory into a "eh??" as 2 out of 3 M1s are blasted into oblivion and his BMP2s deploy just in time to contest the objective! 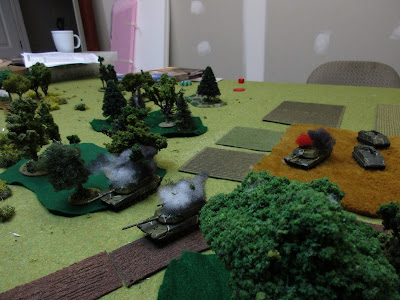 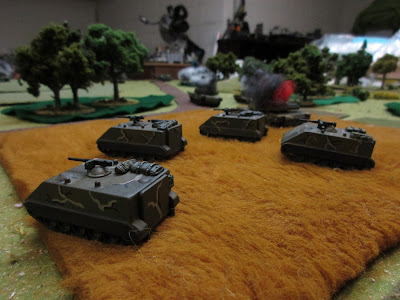 Ken uses his Motor Rifle Company to assault the lone M1 and force them off the right objective. 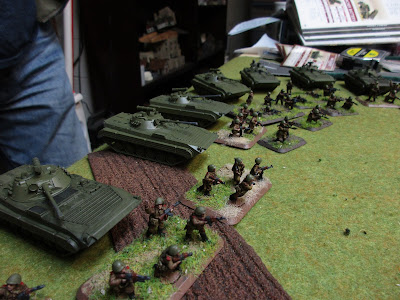 So this was a big battle and full of nerve-wracking tension the entire time.  Think my lone M1 on the US left, next to the 2S1s won the day?  Well, not exactly since the BMP's terrain dash was enough to get them into range to contest the objective on the other side as well.  So Ken had his dismounted infantry protecting my first objective, and a boatload of BMPs moving to contest the second objective.  We had to call the game because we ran out of time.  Ken conceded that he might not have been able to reach the US side and his own objective markers, but you never know.  This was going to turn into an infantry fight with only 1 US tank left on the board, and Ken's command tank still slated to arrive!  It's interesting to note that we both had an equal amount of infantry on the table.  So anything was possible!

This was an epic fight and was our second game of TEAM YANKEE. While we had a few more questions this time around, I think we're getting the hang of things.  Additional questions make sense considering we also had additional toys on the field.  The modern battlefield is a deadly place and there were no shortage of knocked out tanks all over this table!  I know this may be considered heresy, but I'd like to play Sabre Squadron or Third Generation Warfare with these exact same vehicles and see how it turns out, but back to Team Yankee...

It's funny how in the game the armor moves towards enemy armor naturally and the infantry take their role in seizing and holding terrain naturally as well and I think that's a great credit to the game itself.  Combined arms is easy to talk about, but difficult to game and I believe Team Yankee gets it right here.

I told Ken I'd like to play a scenario from the book next so I'll have to look that up and see what (if anything) I need to paint next.  From the looks of things we're doing OK in the vehicle department.

Posted by Disgruntled Fusilier at 6:49 PM