So I've finally also gotten around to trying out "Hail of Fire" again.  The rules themselves have gone through quite a change since I last played them and I was very pleasantly surprised at the latest beta version (available for a donation at Wargame Vault here) 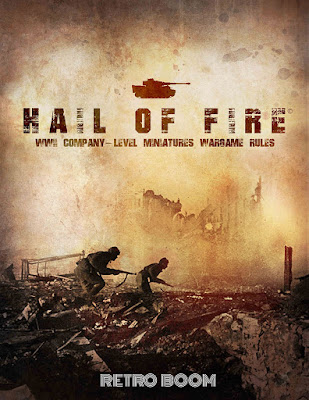 I have to admit, I really enjoyed playing these this time.  Hail of Fire (henceforth referred to as HOF) are another set of rules where you aren't permitted to do everything you want each turn  so you have to weigh your options each turn accordingly.


There is a neat mechanism for determining your command points each turn and there are bonus points you can store up (hero points) that come in handy, if you don't use them all up right away like I did. 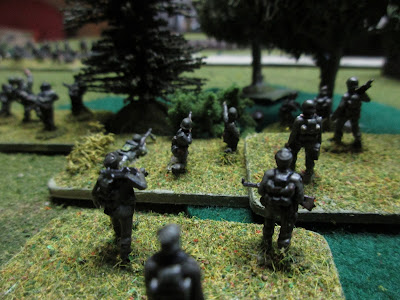 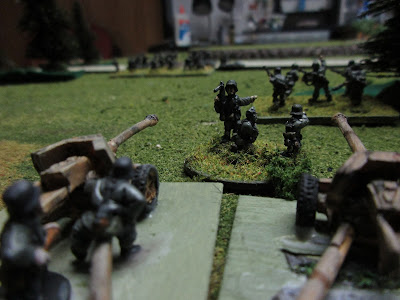 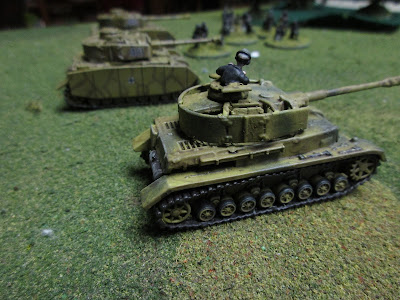 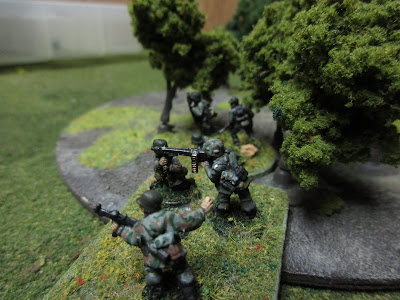 You get to move an entire platoon though, with one order, provided everyone can see the lieutenant.  I like that as the action happens much faster (think flames of war, but moving a platoon costs something).  There are also chit draws, which the author streamlined very much since I last dabbled in HOF.
The turns are surprisingly fast since you're getting, on average, 2 to 3 activations per turn and you can also decide to put all your orders into one unit if you like.  So I can continue to activate an infantry platoon or tank platoon to move or fire (or have 2 tanks move while 1 fires...I think?) as long as I'm spending points.

The TOEs are generous, but troop quality is NOT!  So beware if you have a Soviet force.  It's cumbersome and your poor Ivans will have a really hard time rallying on their own.  The Germans are better at doing things like rallying

Shooting is handled in neat and elegant way (read MUCH better than Flames of War) where you select an enemy team to target and additional hits garnered hit teams within 6 inches of the original hit, provided you can see them.

You then test the team(s) hit to see if they 1. remain in the fight, 2. become suppressed, or 3. are knocked out.  It's not easy to knock out an enemy team shooting, but it is fairly easy to suppress one unless you roll like I do.  I really like a roll to hit and an effects roll.  For armor, you roll to hit the same way, but if your weapon's firepower is greater, you roll penetration, if not you roll "ping" in which case if you roll a "6" it's handled like small arms adjudication and you roll again to see if you're suppressed or destroyed. 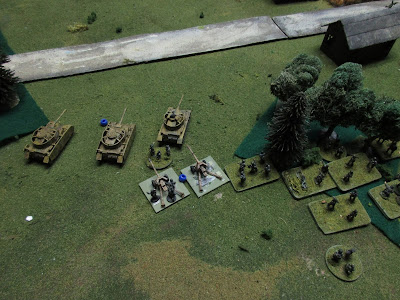 Movement is variable with tanks and other vehicles getting to move 2D6.  Infantry roll 2 D6 and take the higher die.

Indirect fire is a tough one to crack.  To hit your target, you basically have to roll a 12 on 2D6.  If not the die deviates in a 2D6 random distance and direction and you can basically decide if you want to FFE (fire for effect) or if you want to try again next turn (I think).  I have some questions for the author that I am going to email him about especially in regards to IDF.  (Does the observer and the gun or mortar unit count in the same order?  Or do I roll 1 order for the observer, and then 1 for the mortars?  Anyways, my mortars never hit the entire game....What's worse - the Germans basically never had the orders to even attempt (they moved their FO once before the action started). 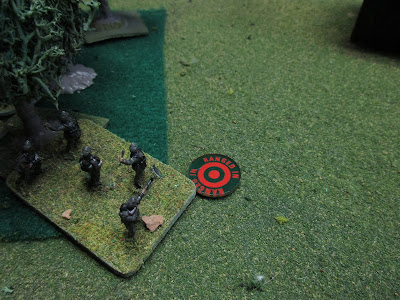 Another issue I had a question over, was when to adjudicate the Received Fire Check (RCF - rolling to see if KO or Suppressed).  The rules clearly state that for units hit "in the open" you adjudicate immediately, but for units in cover, you carry out the RCF when it next activates - so basically if I don't activate that unit, I can have a lingering RCF that needs to take place but might not take place for turn after turn after turn.  What's worse - what if the hit is on the Company Commander?  Could I just decide not to use him for anything and keep a lingering Receive Fire Check for the rest of the game as long as he's in cover?

I basically started adjudicating my RCF's immediately after I received them, regardless of the terrain they're in.

I might be doing all this wrong however so bear with me! 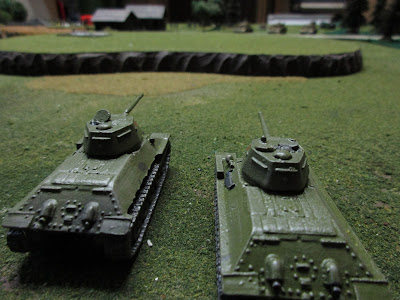 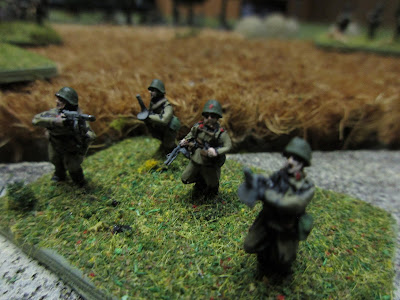 Thoughts
As I said before, I really like where the author has taken these rules.  They are very streamlined from the first time I played them and he has made them into a very slick, fast moving game.  There are some very small rough edges to iron out but like 5CCC the other day, this will be a rules set I keep on the shelf and will definitely play again.  If the author ever gets these to the point where he sells them, I'll be one of the first people in line with my cash in hand.

If you're going to play this game keep a few things in mind:

Turns are wicked short and go by really quickly.
Use your leadership to help rally suppressed units, especially if you're the Soviets!

Close Combat is BRUTAL.  I mean brutal.  I'm quite sure I didn't do it all correctly (the steps in the rules are trying to explain ALOT of things in a very small space and my brain took a few reads to process how to do it).  The Germans attacked a collection of Soviet teams moving towards the farmhouse and, while they won, they Soviets rolled great and knocked out 3 teams in the German platoon, forcing a platoon morale check which also forces a "chit draw" each turn.  In close combat you roll quality checks to hit and each passed QC kills an enemy team.  Deadly!

I think this game is going to be a Soviet victory for the simple fact that the German infantry platoons can't really carry their attacks out, and the Soviets have an entire platoon along with a 3 more T-34s still to bring on the table.  It's not looking good for Jerry!


Posted by Disgruntled Fusilier at 4:12 PM