So this morning I was up with the chickens and played a very quick game (a practice game?) of RAPID FIRE.  I've been thinking more and more of larger modern rules that will handle big battles and give a particular "feel" that I'm looking for.  Rapid Fire gives a nice "old school" feel to it with unit tables of organization and figure-based battalions (6 to 10 figure companies).  I have traditionally given RAPID FIRE a tough time in the past but after rereading the rules I'm going to put together another game, probably centered around the Kursk Ponyri Station battle to see how it goes.  I've played some modern variants of Rapid Fire and have really enjoyed them so I think exploring the WWII rules once again deserves a chance.

Anyways onto the action - this game featured 2 Soviet Rifle Companies, about 21 figures counting a Battalion command stand advancing against a German Company of 9 figures.  Both sides were regular.


I had to look some things up in regards to who shoots and the sequence of play.  Also the observation rules needed some dusting off but at this range, it's a guaranteed spot since the range is so close. 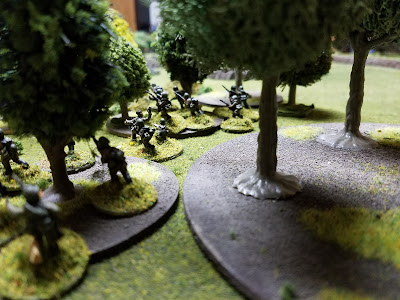 The AT fire is pretty neat .  The Range Band pretty much determines the target number to hit and the gun's HE value is consulted.  In this instance the Germans were able to take more momentum out of the Soviet advance.

Soviet revolutionary fervor is cut short by hot lead as the Germans use their reserved fire to cut into the advancing Soviets.  The first volley knocks down 6 troops in the left company! 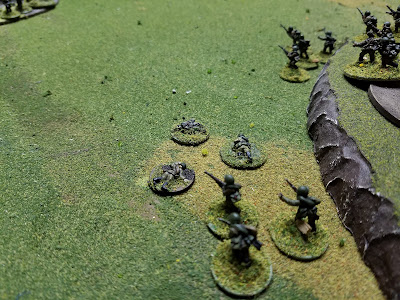 RAPID FIRE hones a more unusual sequence of play and morale checks occur at the beginning of the turn.  The Soviets luckily (well, luckily if you're high command but not one of the riflemen!) pass and the advance continues.  The battalion command team joins the line advancing into almost certain oblivion.

The Soviet return fire has been ineffective against the Germans due to the Germans' skillful use of Reserved Fire.  They are knocked down in strength before they get an opportunity to shoot.  The Soviets really could have used some mortars and HMGs.

It would be fun to play this with more companies, support weapons, artillery, and of course, TANKS!  This might be the "Christmas Offensive" game this winter.
Posted by Disgruntled Fusilier at 5:08 PM