The first "unit" completed as part of my RAPID FIRE Ponyri Station project is the Headquarters and Headquarters Company (HHC) of the Soviet 307th Rifle Division.  In RAPID FIRE terms, this is a 10 figure unit along with a transport section (per the USSR Soviet Forces Handbook issued to US Troops in 1946, I have also used the Nafziger Order of Battle for a Soviet Rifle Division and Regiment in Summer, 1943.).

One of my favorite aspects of Rapid Fire is that I get to tinker with "real world" Orders of Battle in order to produce forces for a game.  In this case, Ponyri Station and the fight for Point 253, the 1st May Collective, and Ponyri itself.

Now that the Division HQs is done, I can focus more on the Rifle Regiments themselves, each with 2 full battalions!  After that I'll work on the tank units and finally the guns of the Soviet god of war!
The table got messed up when assembling it as some of the spray paint nicked off but I thought that actually looked really cool - the metal field desk table with chipped paint.  I thought it gave it character. 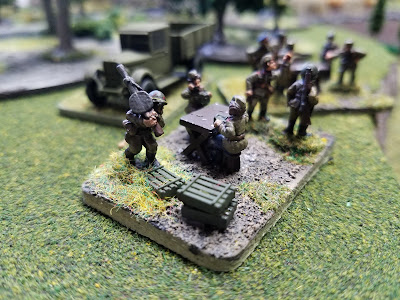 Finally, the Division HQs travels in style in their Zis-3 truck section (5 trucks or so in RF speak).  For the life of my I could not figure out where the Soviets got their air defense units from because in the lowly Rifle Division, I could not find much.  Anyways, the transport section for the Division Main HQs is complete as well.  (Bob McKenzie's Ponyri Station Scenario for Command Decision has the units at Regt and Division loaded with AAA support.)

Surprisingly, this is Krylon "light olive" washed with "agrax earthshade" and drybrushed first with a 50/50 mix of reflective green/khaki, then just khaki.  It looks like a dirty jalopy.  In other words - PERFECT! 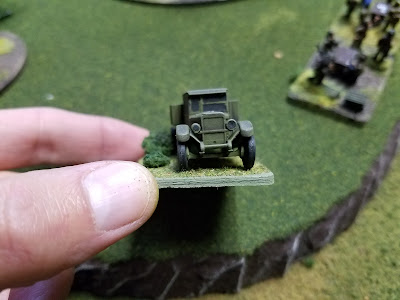 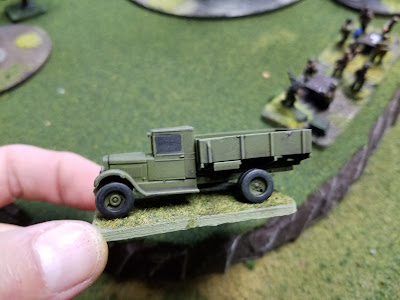 Next up?  Well have to finish some more VDV but otherwise the HQs and HQs company for the 1019th Infantry Regiment must be completed!

Posted by Disgruntled Fusilier at 4:48 PM