Last week I sent Ken the article written by Colonel Bill of Age of Eagles fame about the second edition of Brigade Fire & Fury American Civil War rules.  When I told him that the original Fire & Fury was one of my all-time favorite games and I was very interested in the new edition, the stage was set!

So the usual suspects came over on Sunday and we took the new "Brigade Fire & Fury" over for a test spin.
We decided to go with the "smaller" McPherson's Ridge scenario but minus Howard's Corps.  I had enough miniatures to get the feel of the battle and had some of the most important and famous units on the table.
The changes to Fire & Fury are subtle and while they have a big impact in terms of combat, it still feels very much like Fire & Fury.  Players of the original Brigade game should not fear and will be very happy with this edition.  As the game opens, Dave is able to use Archer and Davis' Brigade to make some great initial headway up onto McPherson's Ridge.  He even pushes Cutler's Brigade back PAST the railroad cut.  Cutler's Troops are good though, and Cutler himself is "exceptional" so it's not proving to be the pushover Dave though it would be!


Meanwhile Davis' Brigade advances against a covering artillery battery.  The cannister reaps a deadly harvest, however and they go "disordered." 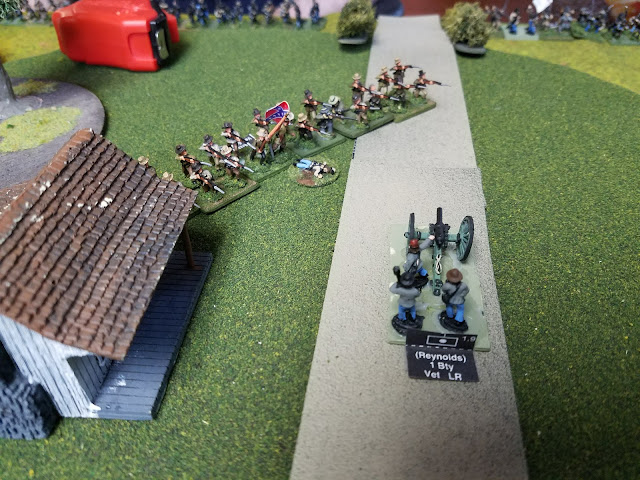 Cutler's boys are pushed off the ridgeline and more and more Union Brigades start to stream in.
By this time I put the Iron Brigade into position right at the bottom edge of McPherson's Woods and they deliver a nasty surprise to the Rebs who are cruising through the woodline.  I would keep them there probably longer than I should have but they bought valuable time for the rest of the Army to deploy!  And thank heavens for that as the Rebs would get a ton of reinforcements soon enough. 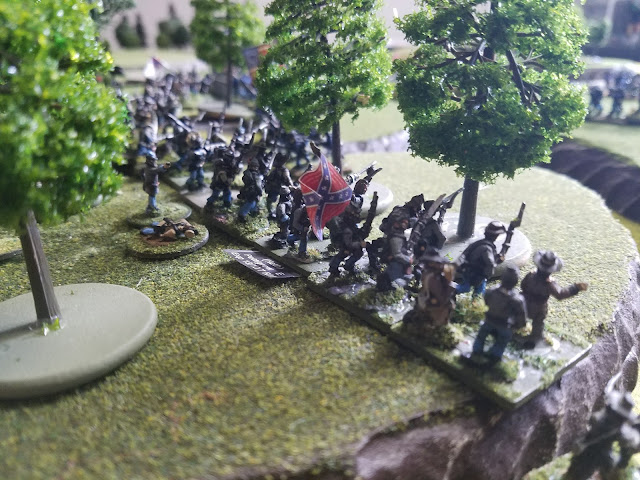 Union reinforcements move into position while the Iron Brigade takes volley after volley.  It's a nail biting defense full of tension as I try to form a defensive line on the back of McPherson's ridge and a reserve line on Seminary Ridge.  I can tell you that literally everything I did was historically plausible and felt right.  Fire & Fury has excellent period feel to it and this game, while long, really reminded me of how much I loved these rules. 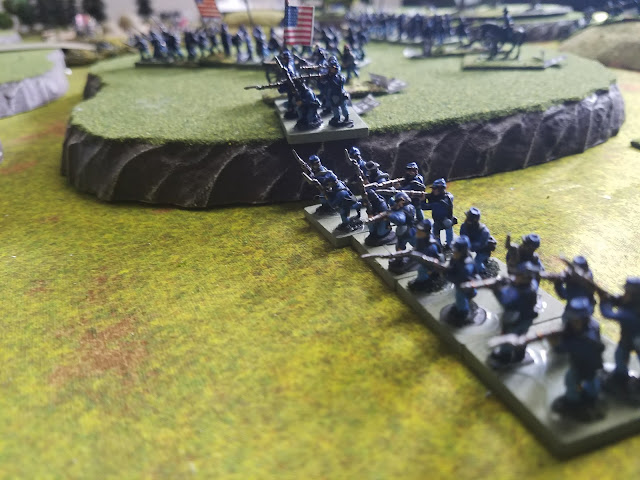 There was plenty of Gettysburg trivia flying around this game, mostly annoying, and all of it by me.  Speaking of which, what is your favorite blunder/blooper from the movie "Gettysburg?"

Anyways I'm debating whether or not to let the Iron Brigade die in place since this is a wargame but looking at the mass of Dave's reinforcements (regenerated from the casualty pile - tell me that's not a kick in the pants!) I feel as though I'm going to need them for when the Rebs hit my main line of resistance.

Another thing I'll mention is that I attached Reynolds right to the Iron Brigade and he never died. 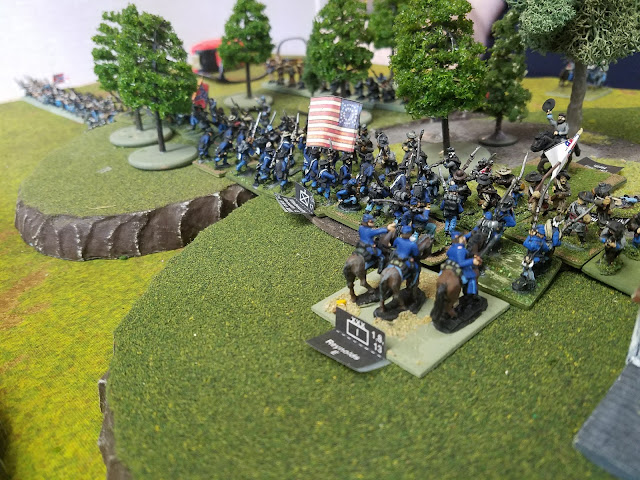 The Union line is starting to take shape around the hills near the McPherson woods and it's turning into "Fortress Seminary Ridge"as I've already lost the other side of the Chambersburg Pike.  Devin's Cavalry Brigade makes a sacrificial last stand for me but it's enough to keep the Rebs on that side occupied. 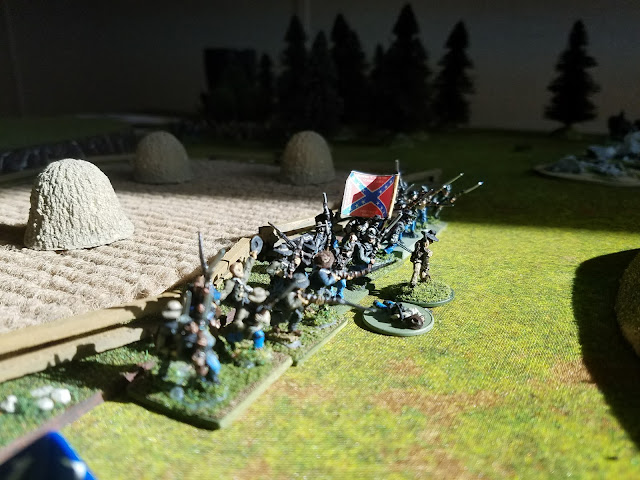 In order to put the reinforcing units on the table, Dave was collecting troop stands from the casualty pile and placing them into the line.  It was disheartening for me, but a great idea since I only had about 55 total Confederate stands! 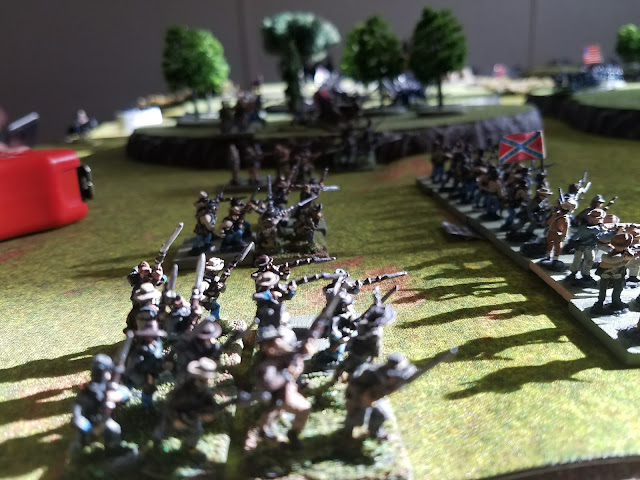 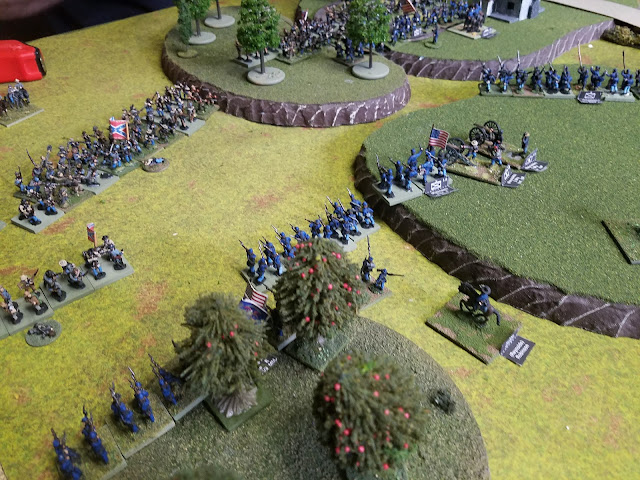 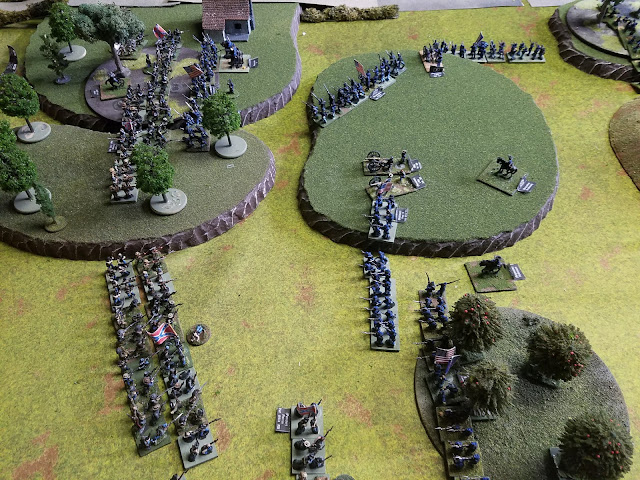 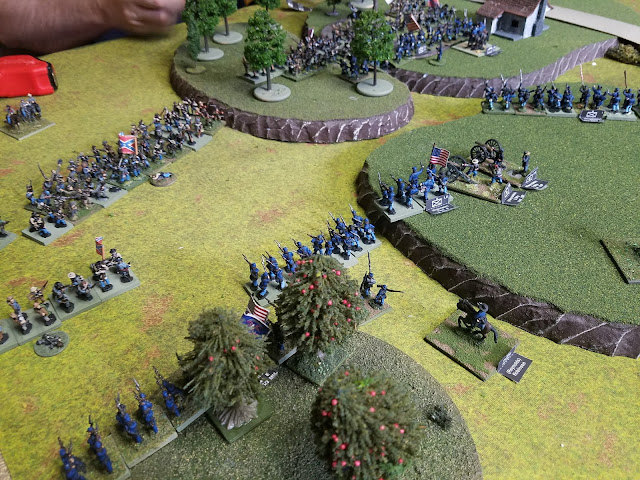 I lost complete track of time becoming totally invested into the defense and the ever growing Rebel ranks to my front!  We called the game at 7:00pm and I was exhausted.  I will say that Fire and Fury as a leisurely game is best played if you have the entire day or even the entire weekend to play.  As casual Sunday game where you only have 3 or 4 hours it's probably not the best game if you want a decision in a short period of time.  We probably played a good 4 hours and had not reached a decision yet.  One could argue that the time scale was pretty realistic but I want something a little faster.

With that said, I did have a blast and I believe Dave and Ken did as well (Ken was more of our rules aficionado and umpire) and as I stated before, this game reminded me of all the reasons I love Fire and Fury.  Historically plausible outcomes, realistic maneuvers, tactics, and operations, and a great narrative are all features of this great game and if you want a truly grand-tactical American Civil War game that retains the flavor and feel of Horse and Musket fighting while putting you in the Corps Commander's saddle, then these rules are worth looking into.  As for me?  Well it's safe to say unless I'm going to play them at a Convention, I have retired Fire and Fury in favor of games that play a little quicker (Neil Thomas ACW from Wargaming An Introduction, Black Powder, Rank & File being 3 examples) but they'll always have a special place in this gamer's heart.

Posted by Disgruntled Fusilier at 7:51 PM