Brian and Dave were over today for our refight of the Battle of Wagram using Command & Colors: Napoleonics (5 July, Gross Enzersdorf) and what a battle it was!  Dave played the French and I played the Austrians.  Brian acted as umpire and adviser to both sides as we fought using this great system!
Brian also generously lent us the use of his "Generals, Marshals, Tacticians" rules supplement along with his additional card deck which added an entire new element to the game (that the French devils used to great effect!).

The French received 5 cards and the Austrians received 4.  The French and Austrians also received extra tactics cards which we both used to good effect.
The French open the battle with some impressive shooting, scoring multiple hits against an Austrian unit dug into the southern most village making up Enzersdorf. 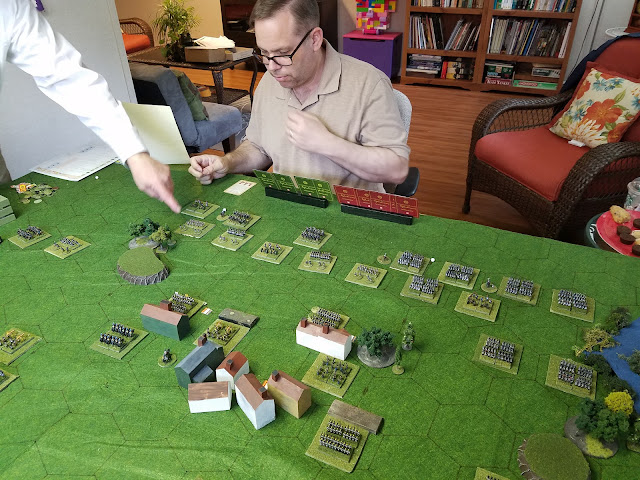 The French kick out their right flank moving closer to my Hungarian units.  The Austrian division on my right flank were the most active in the game's beginning, moving forward to occupy higher ground along the Danube against what I thought would be the French main effort.... 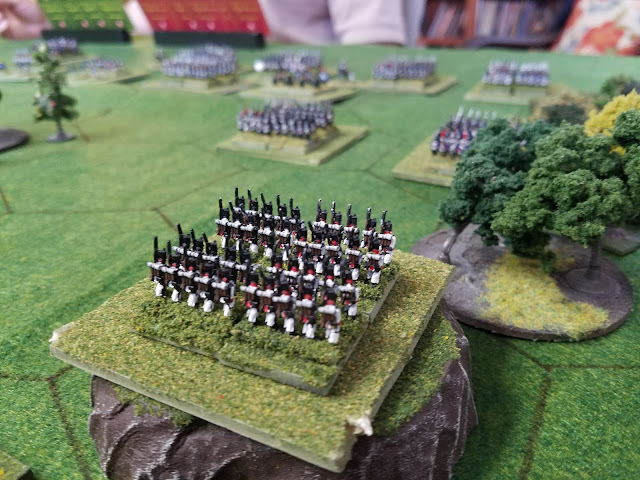 In the center, Dave's shooting starts to take a toll on my forward unit.  As much as I want to reinforce them, I'm just not getting the cards (opportunities) to do so, and so they sit there, powerless against the French!  Pity, too, because they shoot with 5 dice!

Curious movements and advances open up against the Austrian left (the Hungarians).  Is this a demonstration?
Dave moves in for the kill with LaSalle leading the French Cavalry Division falling like an axe on the Austrian left (the Hungarians).  Sure enough, in what was to be an ominous sign of how this game would turn out, Dave rolls double Crossed-Sabers, effectively killing the Division Commander! The Austrian General Maver is killed! 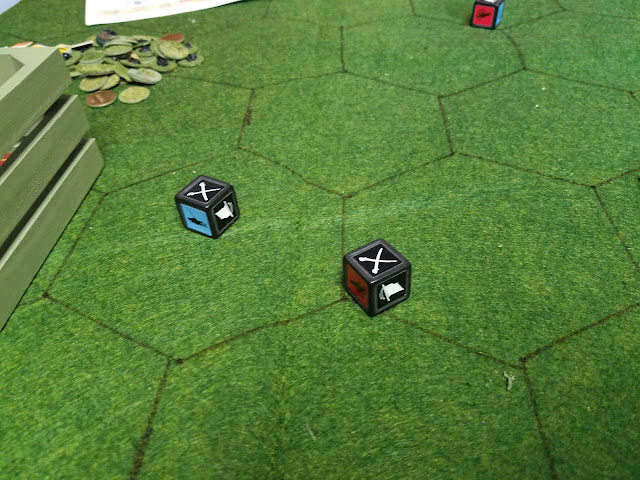 Putting half of an entire Division in Square really sapped my ability to do anything here as it stole away 2 of my command cards (out of 4).  To add insult to injury, Dave took (unbeknownst to him) 2 of my best cards away when I formed the squares! 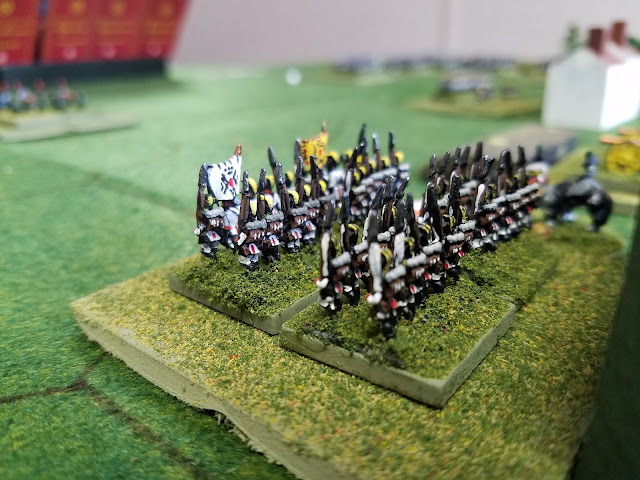 What a terrific game!  The action played out exactly as you'd expect with the cumbersome Austrians moving too slow to strike at the French, and the French having wonderful flexibility to carry out their plan as they wished.  As the Austrian commander, my right most Division seemed to be the most active and garnered the most decisions and combats by me.

The Austrian left was quickly overwhelmed by French Cavalry in a brilliant move by Dave and suddenly what I thought was a "demonstration" looked as if it would become the main effort!  I am not sure even Dave thought he'd be so successful against my left but my fear grew into him turning my flank (never a good thing) and owning the left section of the battlefield.  If that became the case, the Austrians would have had to deal with both the assault from the South against Enzersdorf and also from the North where Dave's cavalry enjoyed such tremendous success.

My front line unit holding the gateway to Gross Enzersdorf evaporated and I lacked the cards to reinforce the rest of the village.  So I had to watch (from my position of relative safety commanding the army) while Dave's French infantry marched right through the Front door, seizing his victory banners and winning the day!

Lots of fun and I'm hooked on CCN for delivering a truly grand-tactical experience where I'm making decisions that affect the outcome of the entire Army and the battle.  Also, CCN brings the advantages and disadvantages of these very different and diverse Armies to light and models them in a very elegant and simple way.  I really love this game if anything for its simplicity and for the narrative it produces. 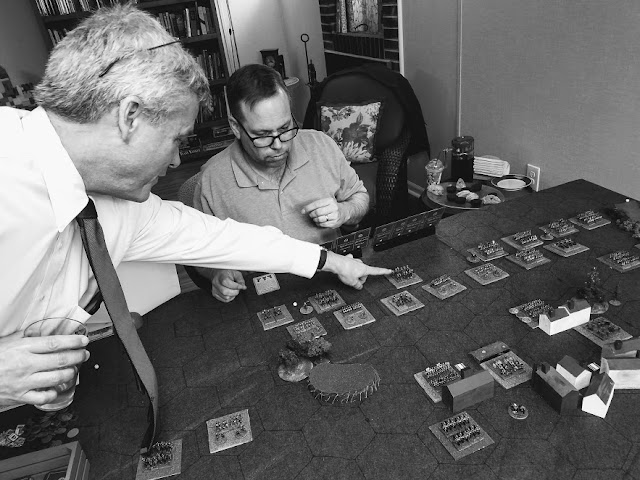 Posted by Disgruntled Fusilier at 5:18 PM