No gaming tonight so instead I set up for Sunday's Command & Colors Napoleonics Wagram game!  I thought I would give everyone a teaser (trailer?) for what to expect from this Sunday's big infantry fight.

Historical BackgroundNapoleon’s second crossing of the Danube was meticulously planned. He sent Legrand’s division to decoy Charles into thinking that the French intended to cross in the same area as before from the north end of Lobau Island. Charles took the bait and massed his army close to the Danube around Aspern and Essling.
Napoleon then bridged from the south end of Lobau Island and started crossing at 2A.M. under cover of a massive bombardment that inflicted significant casualties on the massed Austrians. When Charles realized he had been outflanked, he rapidly retreated to the Wagram position, leaving the VI Corps and Advance Guard to fight a delaying action. Taking up a defensive position around Gross-Enzersdorf, Nordmann’s Advance Guard began fortifying the village.
As Napoleon’s army deployed on the Marchfeld, Massena’s IV Corps was ordered to push forward and capture Gross-Enzersdorf to allow the advance to continue. Spearheaded by the French light infantry, the French entered the village, where fierce hand-to-hand fighting finally drove out the Austrians.The stage is set. The battle lines are drawn and you are in command. Can you change history? 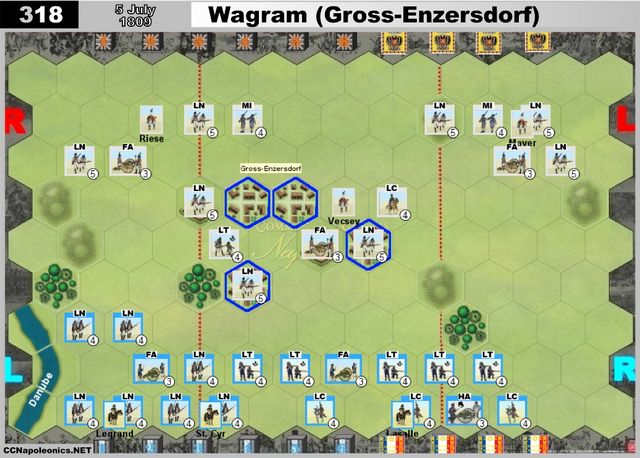 This battle will refight the French IV Corps' punch through the Austrian Advanced Guard under Nordmann at Wagram on 5 July.
The Austrians get 4 command cards, the French get 5.  Additionally, the victory is 6 x banners and the French, with the burden of attack, move first.

Really looking forward to this fight!  I hope everyone has a great weekend.  Tune in Sunday for some 10mm Napoleonic Wargaming goodness!

Posted by Disgruntled Fusilier at 7:11 PM