Well I finally was able to play a game of Sam Mustafa's "Fast Play Grande Armee" (FPGA).  These are available for free as a download from the Yahoo Group of the same name.  Link here [click].  It is very easy to see where the "Blucher" rules came from after reading through and playing FPGA.

It's very similar to Blucher although with more structure.  Anyways, the Austrians and French are once again fighting on my table!  Teugen-Hausen, one of my favorite battles of the Napoleonic wars, occurred early during the 1809 campaign and was part of the lead-up to Eckmuhl.  You can read about the real battle here [click].
This game will start at Turn 2 (mid morning) and end on Turn 6 (evening) with the possibility of a thunderstorm ending the game early.  FYI - I love putting labels on bases.  what's that about?

The [huge, vastly over-strength] Austrian advanced guard is spoiling for a fight!

Saint Hilaire's attack goes in with elan but the vastly over-powered Karl Legion troops hold their ground in some instances, and are pushed back in others.  The Grenzers give ground as well but it's going to be a long, tough slog through these woods for St H's division.


Combat is pretty simple and straightforward (but even more so in Blucher - i missed quite a few rules on the first turn).  Units fight equal to their strenghtpoints, but they garner bonus dice for the location of the commanders, sub-commanders and some other factors.  Additionally there are numerous penalties that force you to re-roll dice.  As a credit to Sam Mustafa's writing, however, almost all of my questions were answered by the rules.  (what happens to officers who survive an enemy passing over them?)

Saint Hilaire's Division gave a good accounting of itself although the "vanilla" nature of the units did not come through since i used the bog-standard units from the FPGA rules.  (5 SP, 2 Sk).  I think STH's units should hit hard considering they were some of the best units in the French Army at the time.  Anyways they did an awesome job and eventually pushed back almost all of the Austrian Avant Garde.  So far, so good.  Everything that has happened, happened in real life.


One important thing I'll mention is that when you roll high on a control test, your troops must advance towards the enemy.  Do I have to make a control test for every force on every turn?  I have to double check the rules.

Also - what about Corps troops?  Does the Corps Commander make control tests for them? 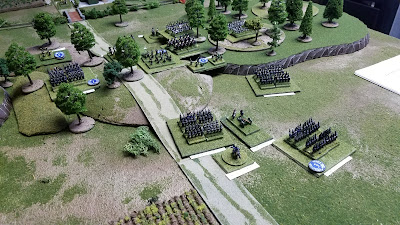 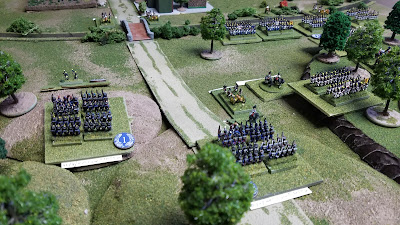 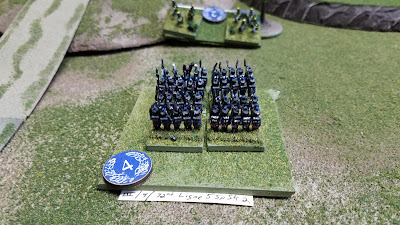 At this point, all of the French attacks have mostly gone off as expected.  My mistakenly overstrength Austrian units give ground grudgingly but have been in the retreat however it has been taking its toll on STH's units who are all now dangerously close to breaking and the reinforcements from Gudin's Division and Friant's Division are nowhere in sight.  Speaking of reinforcements, here is what I came up with:

It's now early afternoon.  The men of Saint Hilaire's Division are tired but so far victorious.  There are rumors that both Friant and Gudin are on the field although no one has seen them.  The Austrians are almost everywhere in retreat.


To Davout's horror, Gudin's men arrive on the field, not where he told them to flank march to, but close to Teugen on the french side of the ridge.  (I rolled for this action.  Davout wanted them to flank Hausen and show up in the Austrian's flank but since I'm gaming solo, I had the dice gods make the call)

Additionally, they are halted and not moving.  (they rolled "HOLD" on their control test 3 pulses in a row!).  Friant arrives.  And also rolls HOLD on his control test.  Sacre Bleu!

What happens next is beyond belief but I'll write it anyways.  Lusignan's Division of 2 modest Austrian Brigades, launches an assault that would probably have taken them to the outskirts of Paris if the game didn't end.  I'll explain.  With Saint Hilaire's units in rough shape, Lusignan launches his 2 fresh brigades against the weaker French ones and destroys the Legere on the right side of the road.

Luck finally falls on the Austrians, who steal the initiative away from the French for the next pulse.  Lusignan rolls ATTACK once again on his control test, sending his brigades against the lead elements of Saint Hilaire's division who are emerging on the road from the forest.  They slam into the flank of the lead brigade and destroy it.  Next pulse they slam into the 57th Ligne's front and break it as well, sealing the fate of Saint Hilaire's Division and pushing the French over to their Army breakpoint of 5 units.  They will have to test every turn now to end the game.


Half of Lusignan's Division falls back while the other half remains solid and holds.  The turn ends abruptly and the French have failed their break test.  The game ends.


Wow.  A meatgrinder and a few things come to mind.  Namely, the Austrians in the avant garde were much too powerful.  Not only were there 3 brigades of lights but they brought 21 strength points to bear against the division, which isn't right considering a SP is a very large collection of troops.  Saint Hilaire's units should have made better progress than they did fighting against full brigades.  The Ehrerzog Karl Legion troops should not have been brigades, they should have been consolidated into a single, smaller unit.  Additionally, Saint Hilaire's Division should have been more lethal in the attack to demonstrate their elite morale.

I really liked the grinding nature of the battle, and I really liked the feeling that I needed my troops to move and I was constantly asking why they were not moving.  On the other hand, I'm not sure i liked that my troops could move against orders.  I had wanted St Julien's men to stay behind the creek as they did historically.

Also, although Lusignan's Division was extremely powerful in the attack, they were not ordered to attack!  I merely wanted them to reinforce Vukassovich on the ridge.

This battle was a ton of fun and I will likely play FPGA again.  I'm not sure it's my "go-to" set of rules for grand tactical napoleonics so the search continues!  I would like to play this again with an "off the shelf" scenario to see if it plays any differently.  i know "Deep Fried Happy Mice" has a bunch of Grande Armee scenarios.  [click]

Grab your map and looking glass - there is  more Grand Tactical Napoleonics coming this weekend for the would-be generals out there!

Posted by Disgruntled Fusilier at 12:36 PM