The Battle of Elchingen with Neil Thomas Napoleonic Wargaming

I had a go recently at setting up and playing through a proper Napoleonic battle from 1805 - Elchingen!  This battle has almost everything you'd want in a Napoleonic engagement - desperate reserve arrivals, nail biting defensive efforts, and harrowing attacks up the slope through shot and shell!
After perusing numerous, numerous, numerous rules sets, I finally settled on "the old, comfortable shoe".  One of my favorite Napoleonic rules sets by none other than Mr Neil Thomas himself - "Napoleonic Wargaming."
Not far from Ulm, Ney is tasked with securing a bridgehead over the Danube.  This battle would earn Ney fame as the "Duke of Elchingen".  Would the French be able to repeat their success?
Ney is facing the better part of 2 x Divisions of troops occupying key terrain.  The stage is set for a classic hasty attack against the Austrians.  While I'm not through the battle yet, all reserves are on the table and the French attacks against the Austrian left have begun.  THis game is being played on my new felt mat that i've been slowly working on, along with my "pinned trees".  How will the table hold up?
Let's get to the action!


Ney, every accustomed to receiving bad news, is informed that another Austrian division is approaching from the west.

So far the battle has been mostly maneuver with the French hustling to get their men across and the Austrians attempting to get their units into position to deal out the most amount of damage to the crossing troops. 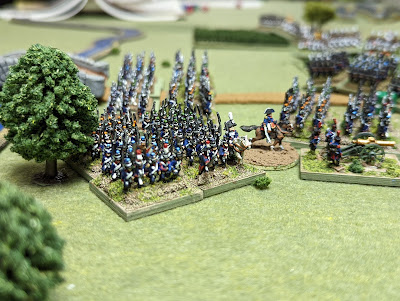 Speaking of the French reserves, they're quickly approaching the battlefield now, and headed straight towards Unter-Elchingen on the Austrian left, which was left guarded by a single regiment!

The French are coming on in assault columns covering the distance quickly and bringing their artillery and cavalry with them.  The dragoons and hussars speed up the hill past Unter Elchingen while their horse artillery, along with the approaching divisional artillery of the reserve division, start pounding Elchingen immediately! 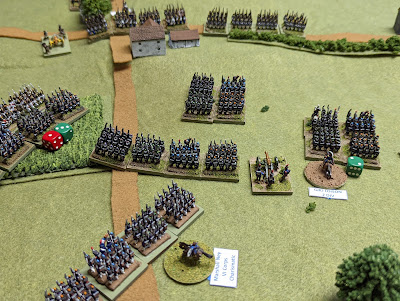 While the fight on the floodplain in the valley in front of Ober Elchingen is not going "to plan" the fight on the Austrian left flank at Unter Elchingen is heating up considerably.  The village is being hammered by close range French artillery and horse artillery, and no less than 3 brigades are waiting to move into the assault.  They'll have to wait until the odds are more in their favor.  Meanwhile the Austrians wonder if their Kamaraden will move to their aid?  They have problems of their own at the moment on the Austrian right in front of Ober Elchingen! 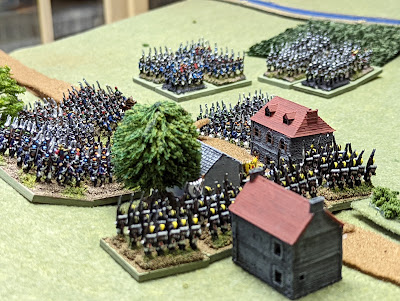 The battle is reaching a critical point, although we're not there yet.  Austrian reinforcements will begin feeding into the battle in the valley in front of Ober Elchingen.  Or they'll rush to form a defensive line from the French division approaching from the east.  Critical decisions to be made for the Austrians!  Their lone cavalry unit is racing to meet the sudden appearance of dragoons and hussars on the ridge.  And I'll say they had better hurry, because the hard-marching French reinforcement division is hammering away at Unter Elchingen on the Austrian left with artillery and musketry and is preparing to storm the village! 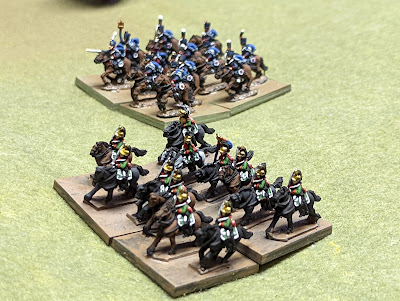 So far, the battle has not yet reached its climax but it's getting there.  The Austrians, with an entire Division of troops converging on the center of the battlefield above Ober Elchingen are headed out to meet the French arriving from the east, while the French reserves from the east are hammering Unter Elchingen.  The French will still need to capture Ober Elchingen.  Meanwhile, the Austrians in the valley are proving stubborn and the French are having a difficult time in getting them brushed aside to continue their advance upon the objective!  This game has been outstanding so far and it's nice to just be playing a wargame and not fiddling with a complicated system or trying to remember how to play.  The Neil Thomas stable of rules just come back to you and just work, hence my old shoe analogy.
The gaming mat has proven very good as evidenced by the cool pictures but I think it needs more fields spray painted onto it, more fences and scatter terrain.  I'm still working on ACW buildings and will be making Napoleonic-era buildings as well to enhance the looks of the battlefields even more.
This has been ton of fun playing this game and I hope to get some more games on the table as the spring continues.  Stay tuned for part 2!
Posted by Disgruntled Fusilier at 9:51 PM