A very hectic week and weekend but that doesn't mean I didn't have time (who can't piece together parts of an hour?) to finish up another One Hour Wargame using Scenario #4 from the book.  (Take the High Ground).  In this case, I figured, what better way to play McPherson's Ridge than using OHW (in case I don't actually get to play the Black Powder battle this month as planned)?

Take the High Ground (Scenario #4) seemed to be the perfect match for recreating the Battle of McPherson's Ridge using the NT One Hour Rules system as there is an elongated ridge system in the middle of the map that a side must seize.    Both sides enter from their respective baseline however it's important to note that the Yankees have 2 Regiments standing atop the ridgeline.  It's a fierce race to get to the hill.

I still diced for forces, but counted "Cavalry" as "Infantry" in this regard because, let's face it, this was an infantry battle!

The subsequent game had all of the tension, suspense, and carnage you'd expect from this classic infantry assault!

Both Union and Confederate:

﻿
The Yankees placed their 2 "Zouve" Regiments atop the ridgeline, with the rest of the Brigade (s) coming up behind them.  These units would represent some of the Iron Brigade's veteran Regiments who were waiting to meet Archer's Brigade in the woods.﻿

The Rebels advanced, as they always did, with considerable elan and in the face of withering Union fire.  Zouave units receive a special +2 to their die roll and this heaped the casualties on as the Rebels came on.﻿
﻿
﻿
﻿

I should mention here that I added 2 "special" rules in this instance.  I allowed the Artillery to use a turn to "limber" thus allowing them to move 12" (a rule which i felt favored neither side in this case) and a "rally" rule where instead of moving or shooting, a regiment, if it had an officer touching it, could rally off 1D6 worth of hits.


A bitter fight is shaping up on the Union right as Cutler's Brigade moves into position to defend the Union's precarious right flank.  Runners and couriers are reporting troubling messages of massed Confederate units to the northwest "Rhode's Division you say? These men to our front are from Heth's Division"  Cutler has no time for that now.  There's a Zouave (veteran)Regiment in front of him and a mere battery of guns to hold the entire Union flank before Howard's "Flying Dutchmen" can come up.﻿ 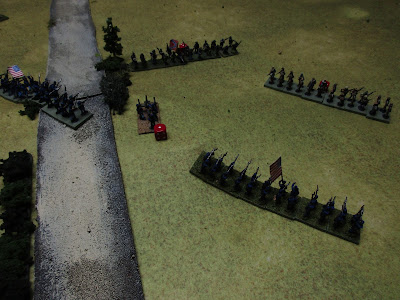 Captain Hall curses at the cluster of officers and marching troops near the toll-house "IT'S ABOUT DAMNED TIME YOU MEN SHOWED UP HERE" One of the officers yells back "THAT WILL BE ENOUGH, CAPTAIN HALL, MAN YOUR GUNS AND HOLD THIS RIDGE AT ALL HAZARDS!" 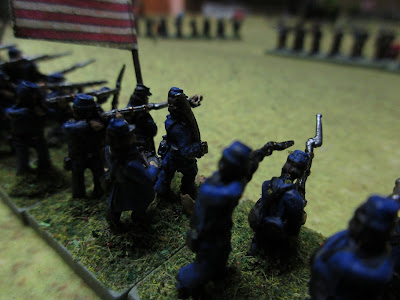 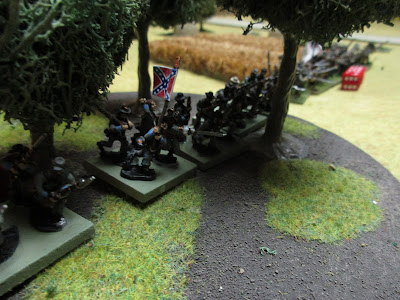 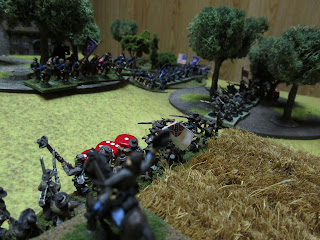 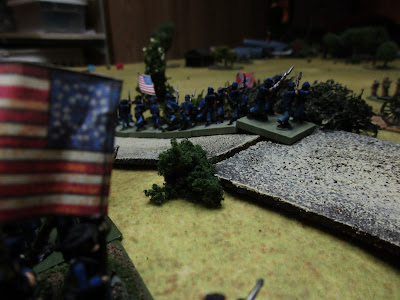 HAVE YOU WORD OF DAVIS?  DAVIS?  I BELIEVE HE WAS CAPTURED OVER THERE BY THE RAILROAD TRACK. 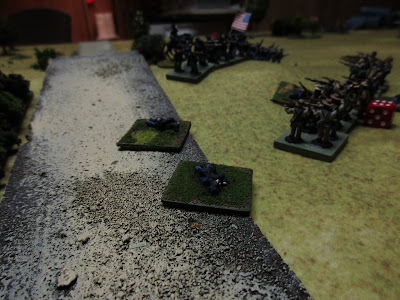 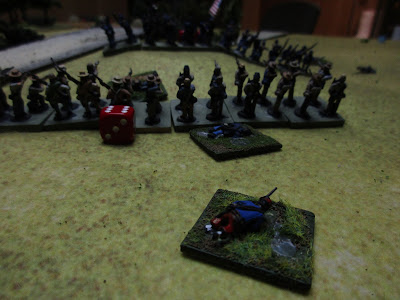 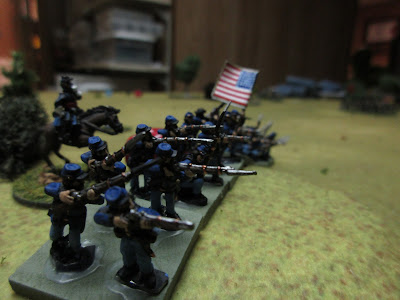 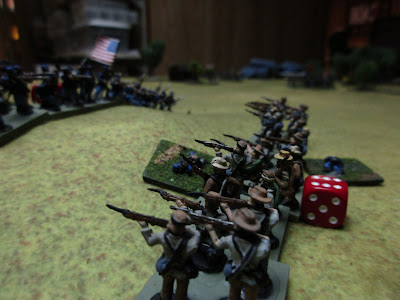 that's all for now.  Looking forward to more ACW action, possibly as part of a linked campaign?  But also, Alex's mods for the NT One Hour Wargames "Horse and Musket" era are beckoning me to play.  Also, this game probably demands an encore with Black Powder, a much more unpredictable game where troop formations, commander personalities (also strengths and weaknesses) come to light.  Looking forward to more as ACW month continues at SOUND OFFICERS CALL!


﻿
Posted by Disgruntled Fusilier at 8:01 AM