Many years ago I started a 15mm project centered around my favorite Horse and Musket battle, the Battle of Lobositz.  To that end, I always dreamed of having forces to game the entire battle - in 15mm!  While that may be bridge too far for current circumstances, recreating smaller engagements from the battle are entirely possible with rules like Black Powder or Rank & File.  (or maybe the entire battle with Volley and Bayonet.  That's a thought!  Only 3 stand units in that case)

You can read about the Battle of Lobositz here.

I should be working on Napoleonics, but I had these guys almost finished!!!  (like in college when you ought to be working on calculus, but instead chose to write a history paper because it's more fun).

The Prussian left wing had the tough job of capturing the Lobosch Hill, a large, odd hill formation covered in orchards, stone walls, and infested with Austrian and Hungarian light infantry!  More than likely, these infantry belonged to the Quadt Von Wickeradt Infantry Regiment (IR#9), who were themselves brigaded under Generals Wolfenbuttel and Hulsen.  The other Regiments in the Brigade were Anhalt (IR#3), Braunschweig (IR#5), and Hulsen (IR#21). 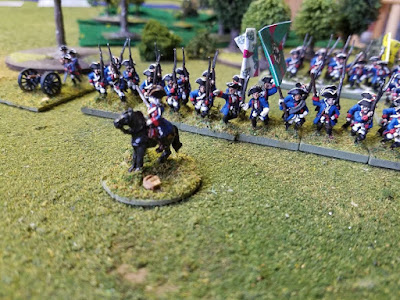 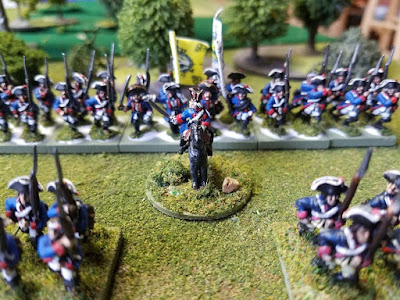 A couple project-focused rants here - after this it's back to Napoleonics hard but in the meantime, I have my Bolt Action game with Dave coming up mid-July at Historicon!  So I'll need to make sure the boys are ready to go, along with their Panther support!

I'm also thinking of bringing down some Horse and Musket troopers for Dave and I to play Neil Thomas' "1 Hour Wargames" a few times!  (Dave - thoughts?  Napoleonics?  ACW?  SYW?  Your call!)

That's all for now.  Hopefully I can get to painting tomorrow morning as well.
Posted by Disgruntled Fusilier at 11:09 AM