The "Sound Officers Call Crew" (namely, me along with the usual suspects Dave and Ken) were out in force at Cold Wars in Lancaster, PA wheeling and dealing in the flea market, and of course making a few famously bad die rolls when it counted most!

I got involved with some fellows who live and game in the local, Philadelphia area and was able to sit in and throw some dice as a French Division commander in the Battle of Maida.  That was great and I was disappointed when he came back early from his sojourn into the dealer's hall!  A great group of guys who I would like to meet up with sometime soon.

The troops in this game were 15mm and were painted brilliantly. 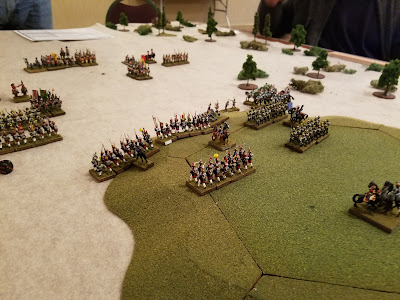 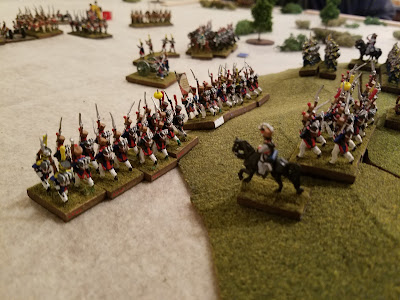 Next up on my agenda was to meet Brandon F, the author of "Hail of Fire" one of my favorite WWII rules sets.  Brandon is a great guy with seemingly endless patience who was able to coach a bunch of newbies through a half day's worth of gaming.

This game, at least to me, looked like a MASSIVE Hail of Fire game compared to my basement games.  Brandon was able to coach the players through and I was very impressed that they all stayed for the entire time which is good thing!  I think it speaks volumes about his rules.

I also had a selfish motive here as I wanted to watch the players go through revealing hidden units and I got alot out of it.

I had to also stop by and shake Mr David Ensteness' hand, the author of Et Sans Resultat, a truly "Grand Tactical" Napoleonic wargame where you are placed firmly in the boots of the Corps or Army commander.  He had a demo ESR game going for much of the day. 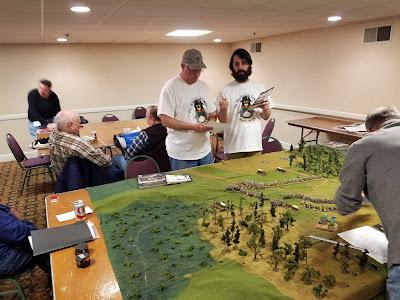 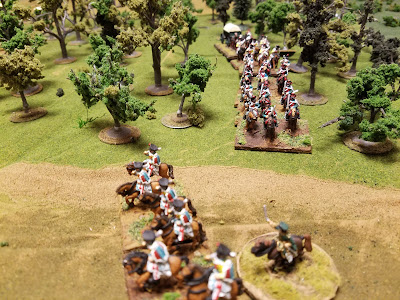 In the vendor hall, I found someone who had an entire wall of flowers for decorating scenery and terrain.  I had to take a picture for my wife, who actually chided me for not buying some...  how many flowers does a wargaming base need?? 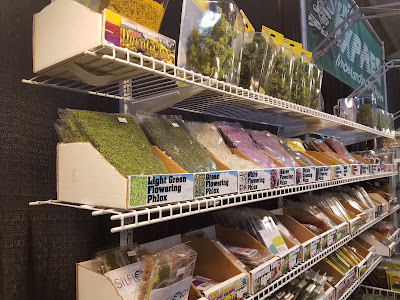 And finally, my third reason for hitting up COLD WARS this year, apart from meeting Brandon and David E was to check out the Battlegroup Ponyri Station game!  These are the same guys who put on the epic "Road to Ponyri" game that Dave F and I played at historicon 2016.  This year they had a FULL HOUSE playing in the Ponyri game, which featured a SCALE model of the Ponyri Train Station as well as side tracks and plenty of buildings to recreate the "little stalingrad" fighting that was Ponyri during the Kursk offensive.  In the pic below, Kevin (standing w hand on hip) talking to Dave F who is facing his former opponent from Historicon!  (it's true, look at the pics!).  So it appears that some of these games bring out familiar faces.

Wow what a great convention.  I didn't spend as much as at Historicon, but I got some GREAT deals especially on 15mm lead.  (like whole bags of 15mm Old Glory French for 5 bucks!) and also got my Roman Cavalry for DBA painted beautifully I might add, for 15 bucks.

I bought some painted 15mm Bavarians and Brunswickers to round out my collection of painted figs for the upcoming CCN games and the ESR 1809 battles.

Picked up the Version 4 of FoW for free, and of course got a CHinese Food container loaded  stuffed with MDF bases.

So all in all, it was a great day where I saw plenty of familiar faces, which I'm finding out is a huge part of going to these conventions in the first place - to meet great, like minded people and play with toy soldiers for the day!

I will NOT be going to Historicon, but I do see a Fall In on the Horizon, and I'll probably be headed to the flea market again to sell my wares!
Posted by Disgruntled Fusilier at 10:46 AM