Played Alex's "Oil Cheaper than Water" again this morning with roughly the same forces from yesterday evening's Sinai clash, minus 1 Egyptian infantry platoon.  I wanted to correct some mistakes I made as the Egyptians yesterday, and try out a different course of action.

As the Egyptians I tried a different approach today and instead of a flanking move around the impassible hill, I sent all of them down the middle, straight at the Israelis, as aggressively and quickly as I could with the results paying off (sort of).

The Egyptian cant shoot the first turn but the Israelis inflict a permanent hit on an advancing tank platoon.  The next turn they fail their "activation check" to attempt to do something, but their rally roll is successful.  The Egyptians are able to close the distance and get a volley off at the IDF tanks.

Turn 1 the Egyptian armor races down the road, with the T-55s in the lead.  They go as far as they can and shoot, minus 1 die.  The T-55s cannot shoot at long range (I think?) so it's vital for them to close the distance.  The Israelis started out much further back to enable them to fire without the fear of return fire from the Egyptians.  This ends up with 1 Egyptian platoon suffering a permanent hit from massed tank gun fire. 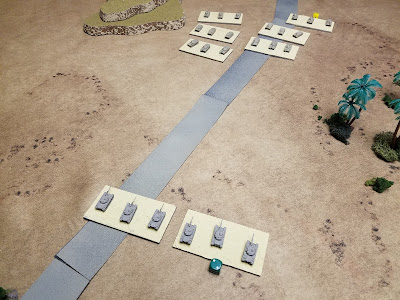 The Magachs are in good shape and treating the Egyptians roughly, until the distance is closed.  The problem with the Israelis starting so far back is that, eventually, the distance will be closed and there's no more room to maneuver.  The Egyptians raced to close the distance, keeping their mech infantry behind the armor so as to protect them in order to assault the town.


Turn 4 sees another lull and fast forwards to turn 5 where more Israeli armor shows up, and infantry, who promptly dig in in the town, but this time within the town itself. 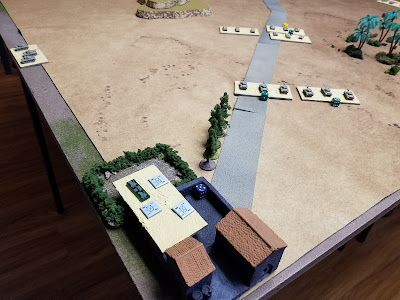 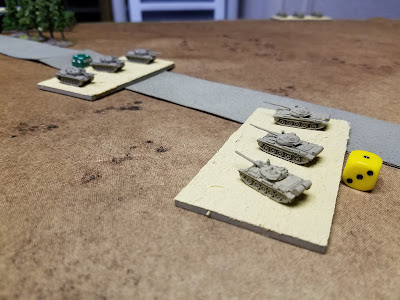 The Egyptians are playing a numbers game now and not doing too shabby.  Time is their main enemy because they'll need to get a toe hold in the town before Israeli reinforcements get there.  No easy task.  Israeli infantry come out of the march, dismount and enter the town.  They have a turn to dig in and the Egyptians are literally right on their doorstep. 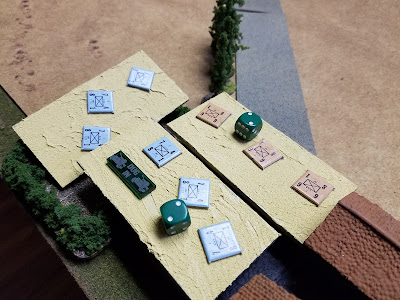 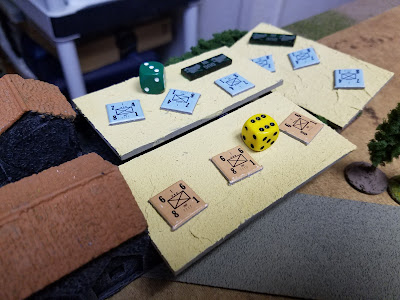 The Israelis and Egyptians trade fire but neither passes their close assault test and the action breaks down into a firefight.  Just as the Egyptians gain the upper hand, the clock strikes turn 10 and IDF infantry enter the town as well.  Their 120mm mortars pretty much seal the deal.  Egyptian armor races to the village to provide fire support against an Israeli platoon on the outskirts, but by now it's too late.  Down to the wire.  If the Egyptians had their other infantry platoon, and possibly mortars or artillery, they may have grabbed a win here as they reached the village at turn 8.

My second game of Oil Cheaper than Water and I was able to integrate the newer features better this time after a more careful re-read of the rules.  For instance, units at 4 hits are "Suppressed" and must pass a quality check to conduct an action.  If they fail, they may take a rally attempt.  Also, units at close range get an extra firing D6 (I really ought to have known that).

The tactic of sending all of the massed armor "up the middle" worked much better than splitting up the forces but without being rash (by rash I mean sending the APCs forward when there are hungry IDF tanks to their front), the Egyptians will have a very difficult time capturing the town with only a single infantry platoon, especially if the Israelis get 2 infantry platoons.   The best bet for the Egyptians is to advance on a broad front with their tank company (3 x platoons) abreast so they can maximize firepower and wipe out the Magach's quickly, possibly even using the infantry ATGMs dismounted.  This will clear the way and allow the Egyptians to get in close to the town and dismount before any IDF infantry shows up.

Stopping as the attacking force is death when you're outgunned so badly.  You have to get into close range as the Arabs/Soviets.

Starting much further back was a great tactic for the Israelis, and they were able to capitalize on their better gunnery from the start.  The arrival of the Magach platoon on the Egyptian flanks didn't seem to have too much of an effect on the Egyptians.

I did run into some questions going through the game this time that I tried to capture.

I had a few other questions but cant remember.  I enjoyed this game so much I ended up purchasing some el cheapo 1/300 aircraft off ebay (MiG-17s and A-4 Skyhawks!) so I can get some planes on the table.  They'll come in handy for some Fate of a Nation gaming as well as Sabre Squadron!  Not bad for less than an hour of gaming.

I'd like to get another game in this weekend if possible.  Time will tell!  Hoping to be able to play next weekend for sure.

Posted by Disgruntled Fusilier at 12:02 PM