Wow what a day of campaign returns from the combatant commanders as Darren and Jack both posted incredible battle reports on their respective blogs.  I've taken the liberty of updating the Corps' situation map below, with a caveat that one battle is still left to fight for turn 3 - the entry into Ponyri Station from the west! 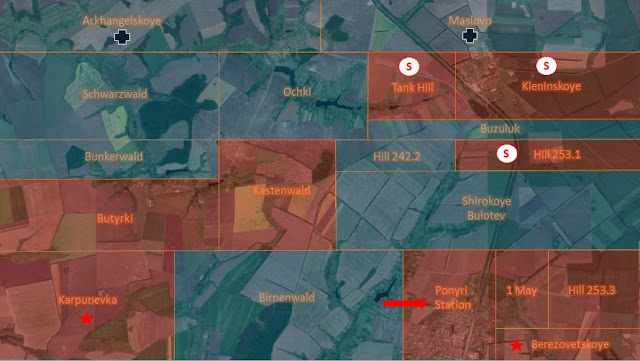 I have left the attack arrow into Ponyri since we still need to fight the 292nd ID's clawing their way into the town and will likely fight that this Sunday.

After 2 x punishing assaults, Darren's troops, elements of the 78th Infantry Division, clawed their way into Shirokoye Bulotev from the north and west.  Jack fought 2 battles for us this past weekend, first the German assault of Karpunevka which saw the Germans barely repulsed after savage attacks and local counter attacks.  Jack also participated in the Soviet attack on Kastenwald which was successful as well after a defense by rear-area troops and the Panzers!


Jack's assault into Karpunevka looked like a brutal battle with the Soviets giving way, then coming back.  Even the Luftwaffe and Corps Heavy Artillery were not enough in the end to break Ivan!  Jack's got another one coming soon - the attack against the Kastenwald.  I cant wait and will post the results here although as you can see from the map, it's gone red!

The hard-earned blues and reds on the map were only possible due to the work on the part of the players.  Thanks guys!  Now everyone has earned some R and R until Sunday, when we finish Turn 3!
Some real nail biting action here as if the Germans lost at Shirokoye and Kastenwald, their forces assaulting Ponyri would be in big trouble.  Luckily they still maintain a tenuous supply situation and can assault Ponyri freely for the time.  Is it me, or do these battles have a lovely, desperate "Kursk" feel to them?!

Hill 253.1 is out of supply here as well, isolated by the German attack against Shirokoye.  Also - no firestorm resources were lost this turn.  The campaign grinds on starting Sunday!  Thinking about a few options for Sunday's battle into Ponyri including Rapid Fire since it worked so well in our big Stalingrad game last summer.  Stay tuned!


Posted by Disgruntled Fusilier at 6:35 PM