Lots more action coming this week as we have even more battles being fought by wargamers who expressed interest in joining the campaign!

Right now I'm putting the finishing touches on the campaign orders and the battles that will be fought this weekend but as you can see, the German XXXXI Corps is keeping up the pressure on Ivan. 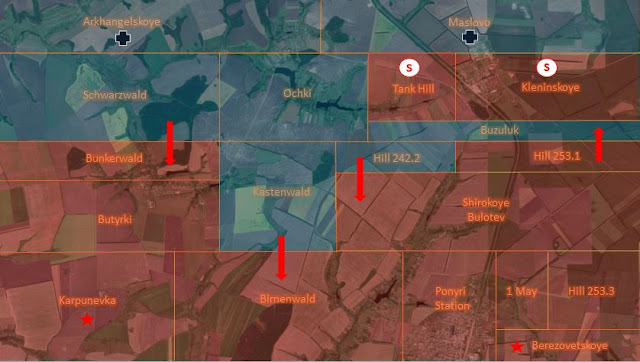 Just like in the real battle, the 292nd Infanterie Division moved to assault their original D+1 Objective the Shirokoye Bulotev.  This was a major jumping off point for seizing Ponyri.  However the Soviets don't just intend on letting them walk in through the front door!

Also, of major importance - the Soviets are assaulting Buzuluk to recapture it from the Germans!  If they can pull it off, it will open up Tank Hill and Kleninskoye to resupply and would put a thorn in the Germans' side by enabling stronger counter attacks later in the game.

I will have none other than the Duc de Gobin fighting the "Second Battle of Buzuluk" for us across the pond playing the Soviet counterattack against Buzuluk.  Additionally, "Just Jack" will be fighting out the battle for the "Bunkerwald" featuring the German assault against the wooded objective on the Corps' left flank.

I am really digging this linked battle campaign so far!  I'll make sure I re-link to all of the battles that are occurring this week!  Also hoping next week to get Brian and Rich to fight out a Memoir 44 battle in support of the campaign.  Stay tuned!  Lots of Kursk fighting on the way!
Posted by Disgruntled Fusilier at 10:08 AM