Wow we finally reached a decision in Turn 3 of the campaign.  Now we can move on to turn 4 when things will really heat up for the Germans.  Coming off of the heels of a crazy and dynamic turn, the Germans and Soviets both saw some very interesting gains as you can see from the map below. 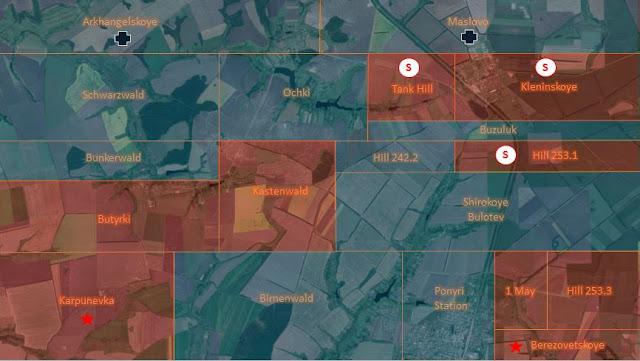 The Soviet gambit into the Kastenwald was wildly successful with no loss of Firestorm resources.  The Germans will have to consider this developing attack into the shoulder of their breakthrough and now with only 2 attack options per turn.  The Soviets also successfully defended Karpunevka from the Germans onslaught!

The Germans captured Shirokoye Bulotev from Ivan, which will also open up attacking options for taking Hill 253 and 1st May.

Today's game was fought using Alex's "UP THE BLUE" rules, themselves a modification of Mr Neil Thomas' One Hour Wargames rules.  Each sabot is an infantry platoon.

The Germans step off onto the attack under the protective cover of 105mm shells whistling overhead.  Meanwhile, dug in Soviets in Ponyri await them.  KV-1s idle in protective cover, awaiting the carefully prepared signal to counterattack! 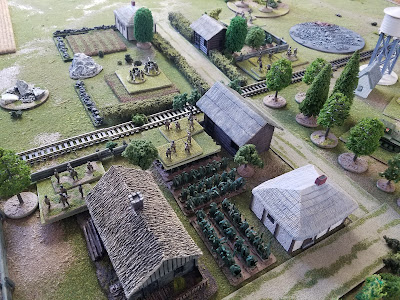 The Germans launch a major infantry thrust with 2 x companies worth of ifnantry into the center woods.  This gives them a covered and concealed approach to Ponryi and a jumping off point to assault the closest town sector of the village.  Note the Soviet platoon in the lower left.

Alex brings up Genpanzerte PanzerGrenadiers, part of his Firestorm Resources, to move into the cleared sector of Ponyri.  Alex has a toe-hold in the town and swings over the panzergrenadiers and halftracks to support his assault.  The Soviets in the sector astride them dig in and go "READY", awaiting the Germans who must cross the street to take that sector.

The Soviets move up the next KV-1 platoon to make life a little more difficult on the Germans, and to challenge the Ferdinands.  While their guns won't make a big difference, their heavy armor will. 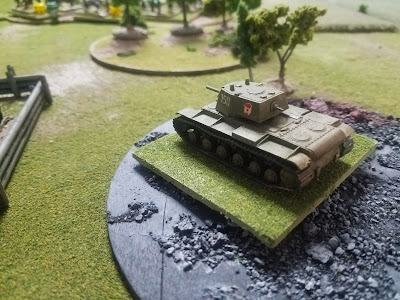 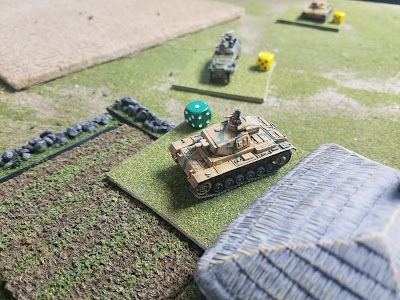 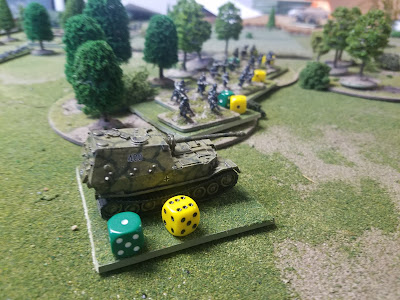 Meanwhile on the right, a Soviet platoon is caught in the open and German indirect fire shreds them.  The go "red" (2 permanent hits!) and will not recover.  I start to shift resources from the fight in the wheatfield over towards Ponryi.  Even a unit from the train station moves up to counterattack.

While the Soviet counter attack in the center is enjoying limited successes, the German thrust into Ponyri is paying off.  German landers are preparing to cut the railway into the village and their armor is supporting.  The Soviets defended far forward and deeper into Ponyri is much more lightly defended.  A classic breakthrough, if Alex can take out that KV-1! 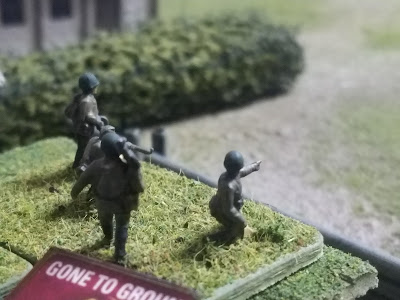 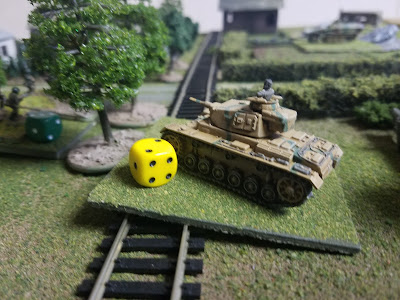 Wow what a fun game.  Of note, we played this game "freestyle" meaning with no pre-determined Neil Thomas scenario.  This game was based off of objectives and did not have a set turn limit.  I will also say it was very close.  If I would have kept some resources closer together, the counterattack could have happened against the first town sector, and not the woods.  I wouldn't mind playing UtB again but on a gridded surface.  I'd also like to give Norm's "TIGERS AT MINSK" a go, possibly with a modified version of his Stalingrad scenario.

After some slowing down of momentum, it's great to see the campaign back on!
Posted by Disgruntled Fusilier at 7:02 PM