Taking a quick break from campaign reporting and fighting to deliver a quick report on the HMGS 2019 FALL IN convention.  I was lucky enough to attend yesterday and had a blast commanding all of the Continental Forces at Germantown as his Excellency, General Washington.


I will say one of the neatest things about conventions to me anymore is actually seeing people i recognize from other conventions and hanging out with them and talking.  I stayed really late this time and that was great.  I think I ended up leaving at 830pm.  Granted, I didn't get there until noon though.  I missed my morning game.  Speaking of Game....

Wow where do I start?  Readers might remember my last convention post COLD WARS 2019, but I was enamored by my friend Bryan's game of Cedar Mountain where he took an SPI map and had it blown up.  He then used 1/72 plastic figures and battle cry dice and turned that into a hell of a good time and as he says "brings the counters to life through the miniatures."  What you get is a game where you are being a general, making decisions, and maneuvering your troops with nicely painted toy soldiers.

Anyways, I usually reach out to him to see what games he is going to put on and then I register for them.  How appropriate that this convention was in Valley Forge, PA because Bryan put on both Brandywine and Germantown.

The map used was Decision Games' "Germantown" map blown up.  I love playing games where I've literally been on, or live near, the roads mentioned.  One of the best parts about AWI gaming! 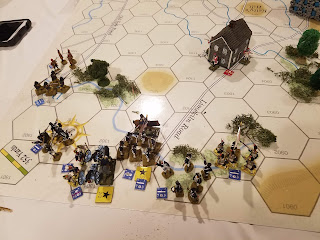 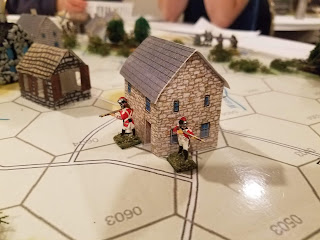 Bryan gave us the ability to "push" troops, allowing them to execute another action as long as you spent an "action point" and passed a "fatigue" roll.  Funny thing about that - everyone was able to execute something last night rolling their fatigue except General Washington...my rolling!

American militia come onto the board and try to sneak into Germantown.  Hessian Jaegers have something to say about that!

Washington spent the better half of the morning moving Knox's artillery into position behind the left column.  Every "push" he attempted failed.  the artillery's performance was lackluster...so far! 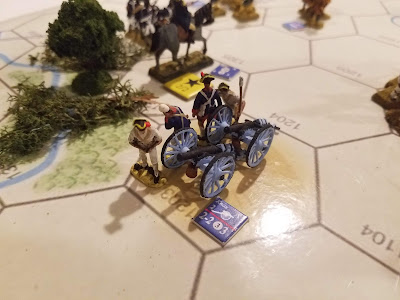 The American strategy changes a little when Dragoons are discovered on their left along with 2 units of converged Grenadiers, who are absolutely terrifying in this game to melee against.

This game would end when a side lost 6 units.  By now, we realized we would have a very hard time eliminating British regular units so we concentrated on their detachments of Jaegers and Grenadiers who were only 3 or 4 figure units.

In a few dramatic instances, Washington is wounded and almost killed, and the guns take casualties.  Luckily I finally roll well for the guns and almost eliminate and drive off a Grenadier Battalion.  It's probably the guns' biggest contribution of the day.  After that, all their firing will be ineffective.


The Continentals on the left seize Kelly hill and want to emplace their guns there.  General Greene is wounded on the left as well but eventually both British Grenadier Battalions are driven off after very costly and heavy fighting. 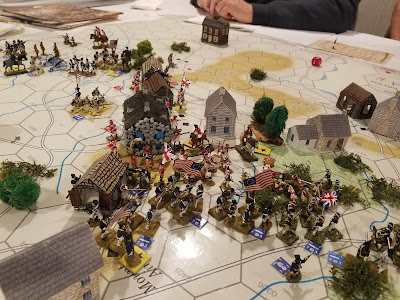 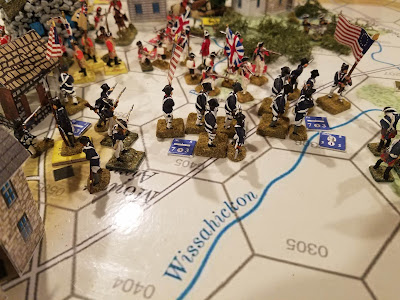 What actually turned out to be a real nail biter came down to the 10th turn and almost "sudden death overtime"but the British were able to mass their fires and kill another Continental unit ending the game.  It was a little over 3.5 hours and was a real blast!  I love the look of the hexes blown up with troops on them and can't wait to play these rules again.  Bryan was kind enough to give everyone a copy of his rules and I'm going to play them, and hopefully along with a copy of his ACW rules as well.

Tons of fun, no BS rules and all of the players had a blast.  We were totally occupied with commanding our armies and no one was left out of the battle.  I am really looking forward to playing in some of the upcoming games Bryan puts on.  I hope he puts on another of his ACW battles soon, too!

OKAY!  Back to the Ponyri campaign where we are coming down to the dramatic and exciting ending of turn 5 today as Ken and I fight out the FOURTH Battle of Shirokoye Bulotev this afternoon.  Stay tuned!  I owe everyone a campaign update this week.
Posted by Disgruntled Fusilier at 9:35 AM

Email ThisBlogThis!Share to TwitterShare to FacebookShare to Pinterest
Labels: 2019, AWI, Battle of Germantown, Board Games, Fall In