It's been awhile since I posted any campaign results and we just concluded a crazy, dramatic turn 5 with reversals of fortune and gains on both sides!  I know everyone out there has been anxious to see where we are at after this roller coaster weekend so here goes!  The map has been uploaded below: 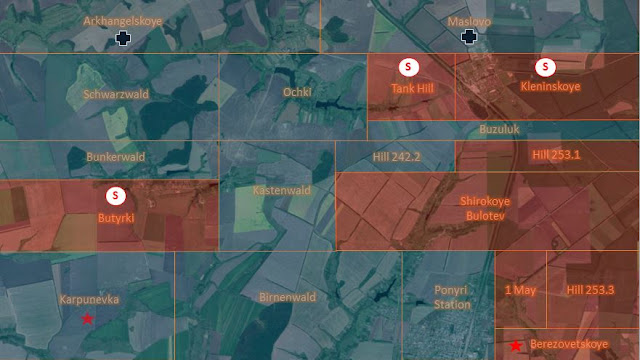 The Soviets successfully retook Berezovetskoye in a desperate attack featuring all of their heavy stuff including KV-1s, IL-2 dive bombers and troops.  Darren played a huge battle with the entire AO using Field of Battle and the game looked incredible!  At Jack's house, the Soviets attempted a heavy attack at Karpunevka (Snava) and were repulsed in a desperate holding action by the Germans!  (we both thought it was going to be a steamroller, too, but the Germans held on!)

You will also note that the supply situation for both sides has been stabilized somewhat, at least for now with the Soviets actually relieving Hill 253.1.  The Germans were able to resupply their forces in the vicinity of Ponyri and the other objectives as well.

Jack and his staff weren't the only ones drawing up plans at HQs.  Check out the maneuver overlay from the Duc de Gobin's HQs!  This is going to be awesome when we switch to World War III! 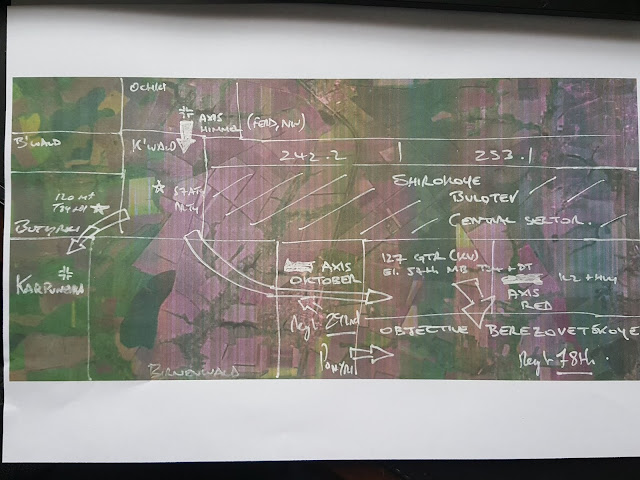 DISASTER AT SHIROKOYE BULOTEV
Here in my gaming bunker, the German push into Shirokoye Bulotev (the 4th battle of Shirokoye Bulotev) was repulsed with heavy losses, although no loss of firestorm troops.  In Darren's battle, the Ferdinands were lost which means all of the German heavy Firestorm Armor is gone!  Good thing for the Germans there are only 2 turns left in the campaign!

The German 1st Platoon is caught out in the open during their advance onto the copse of trees taking heavy casualties (20 dice!) 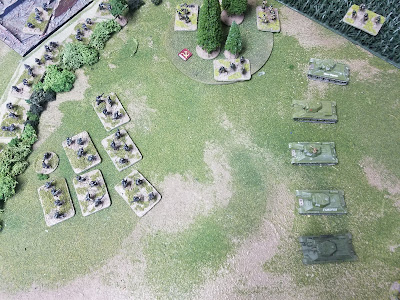 The other Soviet platoon moves out to close the door on the stricken German company.  Literally the only way the Germans can go now is forward to the "safety" of the objective.  There is an SMG company waiting for them there... 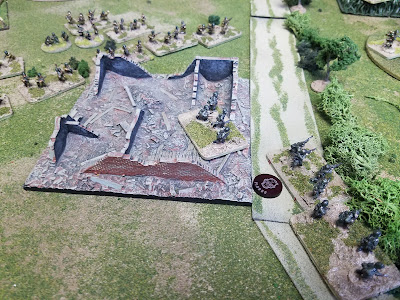 Sensing an opportunity to slow down the Soviets, the German company commander orders his platoons forward to assault the woods, but stays behind to call in artillery fire onto the advancing human wave.  Unbelievably, he fails to get through to the guns, rolling a 1,2, and 1.  This is it for the German CO and his small staff.  They will be mowed down by T-34s next turn. 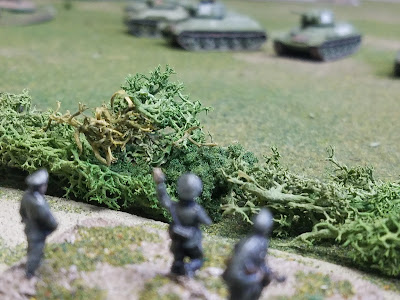 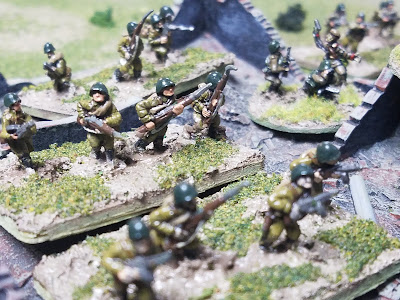 The end comes swiftly as the German small platoon who were reduced to 3 stands loses another stand.  They fail their last stand test and are removed.  That leaves 1 unit left on the board, the 2nd Infantry platoon who surrender as they are surrounded in the woodline.

Wow that was a rough battle.  The Germans had a really hard time and off the bat I can think of a few things I should have done differently.  First, the platoons should have been separated to deal with each Soviet company.  Additionally, relying on the artillery was a big mistake, especially without an observer.  This forced me to leave a leader stand stationary to callin artillery each turn.  This put my CO in way too much danger by being too far forward.

Playing a small FOW game, 54 points, was a big challenge especially against the Soviets who have lots of gear compared to the Germans who really have tough decisions to make when they can't bring everything they need to.

All in all, a fun but tough learning experience for me.  I'm ready to move onto the next turn in the campaign!  Speaking of campaign, total Firestorm German losses are as follows: