The usual suspects were over today for the annual Christmas MEGAGAME and this year we pulled out all the stops, switched centuries, and put a huge battle on the table - Napoleonic style!  Some of you will remember last year's Arab-Israeli battle for Tassa Junction during the 1973 Yom Kippur war using the popular Team Yankee rules.  In fact all of the Christmas offensives have been 20th century affairs...until now!

Today we played the entire battle of Aspern-Essling using Norm's excellent "EAGLES AT QUATRE BRAS" rules, and when you're done reading this, you'll wonder how we fit all of that Napoleonic goodness on a single 6x4 table.

We played this battle using the reinforcement schedule and unit roster from the Volley & Bayonet "Austria Stands Alone" campaign supplement.  I had spent quite a few weeks in preparation for the game, including putting the roster and unit quality table together, building terrain including the villages of both Aspern and Essling, modeling the world-famous Essling Granary, and the Aspern Church which Alex mused looked like the Munster's house from the old TV show.

Units from Hiller's column shake out from the road to Stadtlau and fan out to assault Aspern.  No shooting or combat on the first turn.

Hiller's troops continue to fan out to assault Aspern while the French heavy Cavalry to the tune of Pire's Hussars and heavy Cuirassier Brigade Fouler leave the bridgehead position to assault the oncoming Austrians on the Marchfeld!  Ken's Cuirassier are now trapped in a pocket, unable to retreat and taking heavy casualties from assailing Austrian brigades.  GdD LaSalle accompanies them.

Hiller's column reaches Aspern and shakes out to attack with the light troops assaulting the Aspern Church cemetery and structure.  Ken's Cuirassier are keeping the Austrians from mounting a direct assault on Aspern village itself.

More fighting in front of Aspern as the Cavalry escape and Pire's Hussars expand the fight almost the to the very muzzle of the gun battery! 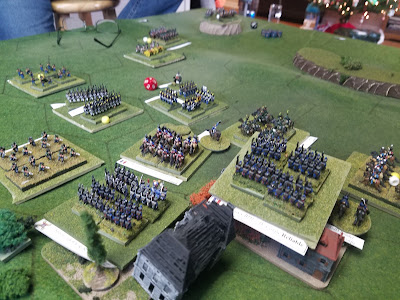 I have to admit by the end of the 1:00pm hour, the battle looks weird instead of fighting around Aspern, there is fighting north of the town where the Austrian second column will arrive and out.  French artillery is beginning to find targets from within the bridgehead but things are quiet in Essling.  For now.

Pressure from the first and second column is relentless as fresh Austrian brigades are sent into the attack.   Renewed assaults against Aspern continue while the cavalry fight on the plains to the north. 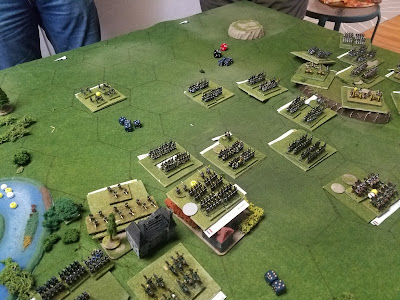 Austrian infantry flood down from the north and fan out across the Marchfeld as more Austrian guns line the hills ringing Aspern.  While historically those guns proved so troublesome that Napoleon ordered an assault against the guns, this is different since the see-saw fighting with the first and second column, the Marchfeld is now crowded with Austrian infantry brigades and marauding French cavalry brigades.


It's worth mentioning here that one of the reasons Aspern held on for so long was the presence of friendly units blocking the retreat.  That's a good thing in a number of ways because it guarantees that the village cannot be easily taken.  Unfortunately for the unit holding, it wears it down very quickly.

Dave and Alex waste no time in expanding the fight to the east, towards Essling and the flanks.  I have another heavy cavalry division coming on at the same time and a fight will be brewing near the Gardens, an objective, soon to the east and southeast. 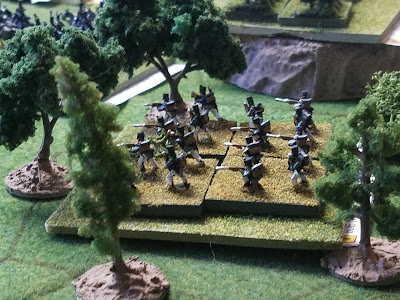 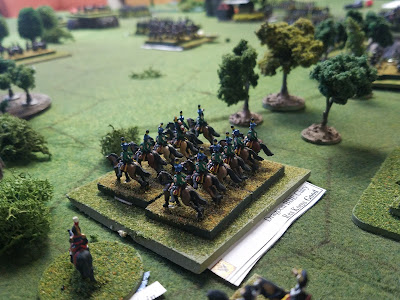 Austrian heavy cavalry charges the II Corps Artillery next to the granary.  The battery successfully passes its command test and can fire a 3 dice volley at the oncoming horse.  Would you believe it?  3 sixes! 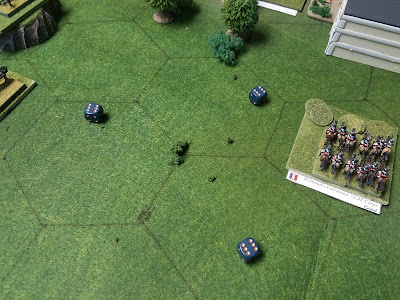 After numerous assaults, the Austrians carry Aspern with a fresh brigade of Hungarian infantry.  The lights manning the town pull back towards the Lobau to join the Baden troops.  They establish a blocking position and will continue to give a good accounting of themselves.

It's worth mentioning also that here we started to "figure out" EAQB and what Norm is wanting you to do.  The looks on my group's faces were priceless as they tried to set up flanking maneuvers, using cavalry correctly by forcing infantry into square and possibly disorder, then pounding them with extra artillery dice or infantry combat dice!  I dont think a single person in my group was displeased with the results so far.

5:32pm The Focus Shifts Towards Essling

With Aspern comfortably in Austrian hands, the fighting is beginning to shift to the center and East.  Alex and Dave know they have to hold the Granary in addition to scoring casualties of which mine are mounting now and I'm getting close to the initial casualty BP.


In the center, Austrian Grenadiers move to assault the Granary and seize a wooded copse next to it while more of their infantry storm Essling.  The French are pushed out of Essling in hard, heavy fighting and the II COrps Artillery guarding Essling's left flank and the Granary go out of ammo.  The Austrians move to overrun the gun battery and it's pushed back towards French lines. 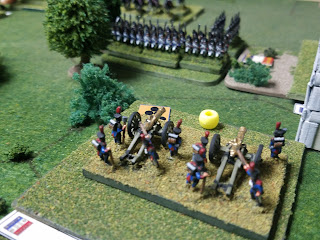 At the bottom of the 5:00pm turn, the remainder of the IV Corps shows up and French infantry reinforces the line south of Aspern.  It's literally perfect timing as the Austrians are desperate to put a stop to Lannes' Corps arriving on the field - 9 more brigades!

The generals are exhausted by now.  We pull cards for the turn and it advances to 1 minute shy of 6pm.  Lannes' Corps will have to wait and the Austrians force the french out of the Granary with a disorder result (single hit).  Advancing into the Granary I am at 32 heavy casualties and each unit will have to roll.  Instead we call the game.  The Austrians hold the Granary and Aspern.  Essling was retaken. 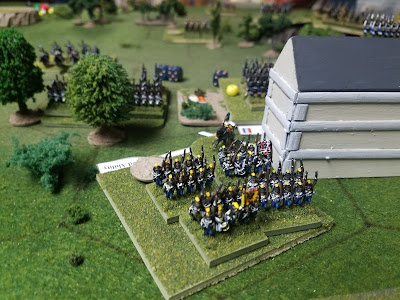 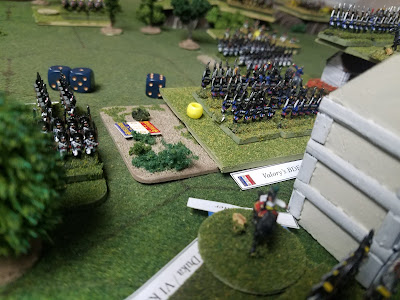 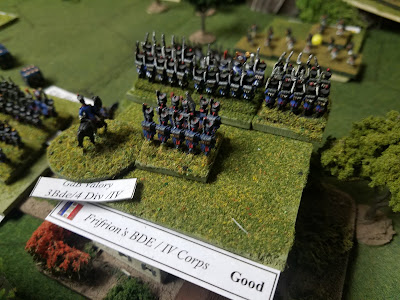 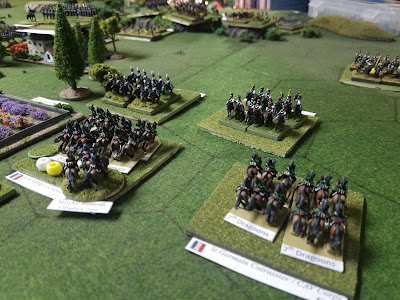 Man what a battle this was!  Everyone was pretty worn-out by battle's end but all in all a great day of Napoleonic gaming where we fit the whole battle of Aspern Essling on my modest 6x4 table!  Granted, it was getting crowded but it was a great spectacle none-the-less.  I definitely learned a lot today and it was fun getting reacquainted with Norm's rules which I enjoyed very much when I first played them.  Some of my key takeaways follow:

I need more (lots more) Austrian cavalry in all shapes and sizes from light horse up to heavy.

I realized how much I enjoy playing games on hex grids and games that are simple to learn.  One of my main goals for 2020, at least in terms of Napoleonic gaming, will be playing more Commands and Colors Napoleonics, and playing more of Norm's EAGLES AT QUATRE BRAS game (perhaps using CCN scenarios which I feel go together nicely).

I want to spend more time gaming and less time with the rules and I definitely want to play games that give me a decision quickly.

After the exhilaration and accomplishment of putting on a truly MASSIVE game like this, I'm left feeling a little....lost now?  What next?  I'm actually not sure where to go from here.  More to ponder.

Look for an end of year recap coming up on 2019's gaming soon!  I hope you enjoyed this battle report - it was a real blast to play!

Posted by Disgruntled Fusilier at 10:25 PM