One day until Christmas here in the eastern US.  Ironic that it's been about a year since I sat on my couch and wrote out the "2018 Wargaming Year in Review" post.  I actually sat in the exact same spot and drank coffee all day on my couch during the Government shut down (it sounds amazing, doesn't it?) and penned an epic blog post that covered a year of great gaming!

I'm sitting in the same spot from a year ago, which is becoming something of a tradition for me when writing these retrospective blogreps.

Again, I ask you all - where did the year go?  How did my daughter become 7, my son become 3, and our Ponyri Campaign is practically wrapped up?  Speaking of which, this year we had some great and epic battles fought.  We tried out a ton of new rules, rolled scores and scores of "1"s (not good!), drew bad cards, drew good cards, spent lots of money at conventions, rolled a few "6s" when it counted, hung out with and also skyped with good friends (The Duc de Gobin!), finished a 15mm World War II campaign, played gridded games with grids and hexes, played open games with rulers and tape measures, and had a seriously good time doing it!

Darren's idea to hop on Skype was a great one.  So obvious - why haven't we as a gaming community communicated with each other more?

I'm coming off the thrill of hosting a massive Christmas MEGAGAME of Aspern Essling and that in itself was an incredible time!  What will I host next year that could possible top this?  Norm's rules turned out to be a huge success and they will find a battle on my table again! 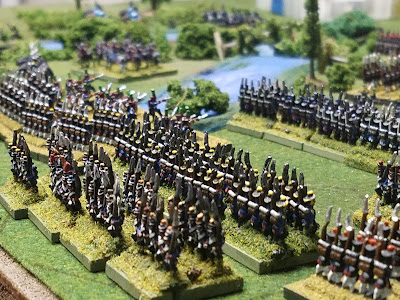 Rules and Gaming Firsts
This year some of  rules and games we played for the first time include (there are a ton when you look back - I was surprised as I was looking through my posts at how many "firsts" we had this year):

Norm's rules got quite a showing on my table this year as I played games of Two Flags-One Nation, Eagles at Quatre Bras for my Christmas MEGA GAME (Aspern-Essling), and lots of Tigers at Minsk games including the 37th Guards scenario, Power Station Scenario, and lots of the conventional Kursk-style scenarios from the TaM rule book.  Plan to see more of Norm's stuff in the coming year.

We played in multiple, massive, Commands and Colors 100 Days campaign games run by Brian and his crew (I played Blucher and went down in wargaming history turning to my staff with literally 1 card in my hand before the last victory banner was seized by the French and stated "I have an idea".)

My group's gaming this year spanned from the 17th Century all the way to the 20th Century with many wars in between, from the Battle of Montgomery 1644 to the "Battle of Ziegenhain" in 1984 in Central Germany!
Also attended multiple conventions this year, which is always great.  Dave and I hung out at Cold Wars 2019, and I went solo to Fall In 2019 where I got to meet and hang out with and game with Bryan L. and play in some of his excellent hex-based wargame miniature games which I seriously enjoy playing.  Bryan, if you're reading this thanks for everything

It looks as if the real winners this year though, were probably World War II gaming and Napoleonic gaming.  Hardly surprising with the vast amount of WWII games we played during the Ponyri Station Firestorm Campaign (seven campaign turns averaging 3 battles fought per turn is 21 WWII battles alone!) and our continuing quest for the "right" Napoleonic rules.  Of all of the Napoleonics we played this year, Commands and Colors Napoleonics actually got the most tabletime for me, anyways, including an epic Waterloo refight that was the last ride of my 15mm troops!  regarding WWII, the Firestorm Ponyri campaign saw wide use of different rules sets including Battlegroup, Flames of War, Alex's Up the Blue rules, I Aint Been Shot Mum (Jack), and Rapid Fire (us and Darren)

It seems as if grand-tactical or almost operational level Napoleonic gaming was the preferred gaming scale for us this year as we did not play a single "tactical" Napoleonic Wars game (battalions and lower).  The "Black Powder" rules I like so much definitely lost out in favor of bigger scaled games such as Blucher, Snappy Nappy, EAGLES CHEAPER THAN BRAIN CELLS, Eagles at Quatre Bras and similar rules where you command brigades.

ACW and ECW came in next with 3 different games each and modern gaming falling in last this year.  I suspect that will change into 2020 with the new version of Team Yankee coming out and with our Fulda Gap firestorm campaign due to start in January 2020.  My Cold War American and Soviet micro armor are looking sharp on their new bases and spoiling for a fight across the inner German border!


It was a great year for gaming, unfortunately however it was a slow year for blogging and this year marks my lowest number of blog posts since this blog's beginning.

From the Acquisitions Department:
This year on the materials side of things, some other big milestones in the acquisitions department as I:

Sold off my entire 15mm Napoleonic range (traded, actually)
Acquired a vast horde of 15mm ACW troops at Cold Wars 2019 - I'm literally done buying ACW!  I haven't even rebased half of them yet.
Doubled (or tripled) my collection of 10mm unpainted Seven Years War troops for a project in 2020
Acquired a shed-load of 10mm Napoleonic troops (seriously you have no idea - there are 3 x collections worth of these guys both from Jack's shelf and from my purchases.  once again I have more Bavarians than actually fought in 1809...how does this happen?)
Acquired a shed-load of 10mm World War I troops
Restarted my work on 15mm Ancients (Early Imperial Roman)

What about Painting?
Lots of progress here on the painting front as I finished my 15mm WWII SS Company, and roughly 2 15mm WWII American Infantry Companies along with all of their various supports.  I still want to complete my midwar US Sherman tank company and recce for battlegroup games.  I think over the years we've given alot of attention to the eastern front.  I'd like to look west soon!

This year totally stalled on the AWI front (again!) but I'm hoping to rectify that soon.  I'd also like to play a large AWI battle with Black Powder as that's been something that i've been meaning to do for a few years now.  I have the troops, with most of them painted, too.  I also acquired all of my AWI generals for both sides from Cold Wars 2019 last year so I'm almost ready to do something in this department  Just haven't been able to get past painting 1 Regiment per year....the truly sad thing about this is the fact that I have so few units left to finish and ALL of my AWI figures will be painted, based, and done.

I sat down and counted my projects, either in-progress or in conception, and there are MANY.  At last count, there were 14 projects that I actually have the miniatures for on-hand.  What does that mean for 2020?  It means I have to narrow down what I consider the big "priorities" for 2020 and I plan on tackling that in a St. Stephen's Day blog post (kudos if you know when that is) that will cover wargame priorities for 2020 including painting, gaming, and acquisitions (if there are any?!?)

This coming year I have to focus on whittling down on the lead mountain a bit.  I purchased these miniatures for a reason - to play games with them!  At a very minimum, expect progress on the  10mm Napoleonics, 10mm SYW fronts.  Looking across at the other projects, I have a few directions I can go, but some of these units have waited a long time to get their uniforms!  I can tell you my 2020 priorities will span centuries...

So that's it for my 2019 gaming look-back.  I'm happy with the games we got to play, and the wargaming "firsts" we all tried out this past year.  I'm very much looking forward to more great gaming, hobbying, and socializing in 2020 and I wish you all reading this the same!  Merry Christmas to you all and thank you for reading the Sound Officers Call blog!
Posted by Disgruntled Fusilier at 10:00 AM