Ken and Dave were over yesterday for some epic WWII gaming.  On the table?  A large Stalingrad battle using my 15mm kit and Flames of War with the "Enemy at the Gates" and "Iron Cross" infantry force compositions.  Total of 90 points on the table playing the "No Retreat" scenario (what else for Stalingrad!).  Readers may recall our EPIC "Rapid Fire" Stalingrad mega game from the 4th of July Weekend a few years back.

It is OCtober, 1942, and Operation Hubertus has begun! The Germans are pushing into the factory district to secure a toe hold on the Volga.  Dave played the Soviets with a full Hero Rifle Battalion and Ken played the Germans with a full Grenadier company and an elite, flamethrower-equipped Assault Engineer platoon.

The Soviets have a convoy of KV-1s and anti air units headed their way, while the Germans will start with all supports on the table, including a battery of 105mm guns, and a mortar platoon.  The Soviets, never lacking for artillery, have a battery of 76mm guns and 122mm guns on the table!  Also - the vaunted Luftwaffe will make many appearances over the factory district today!

Ken steps off onto the assault on a broad frontage, attacking multiple hard-points simultaneously.  The pre-registered target points help whittle the Soviets down.  Dave meanwhile, issues Chuikov's orders to the frontline units - not one step back! 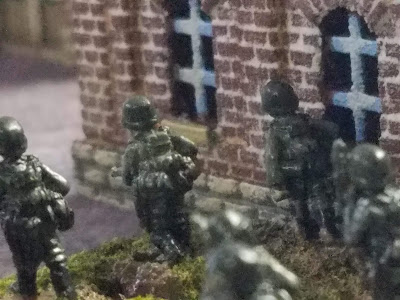 The assault begins with the Germans immediately moving to assault the workers flats and the department store, both key terrain in the fight for the office building immediately behind - a key German objective which Ken sets.  Dave holds his elite assault group behind in ambush, looking to unleash them when the main German thrust presents itself. 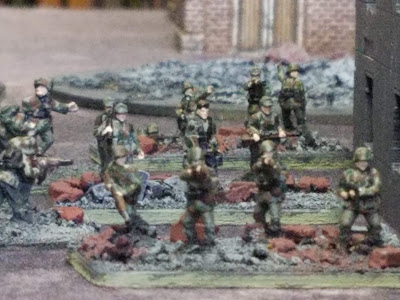 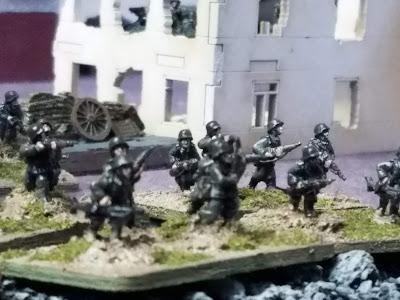 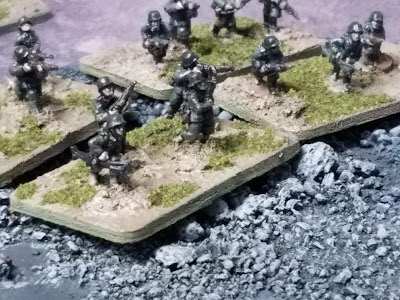 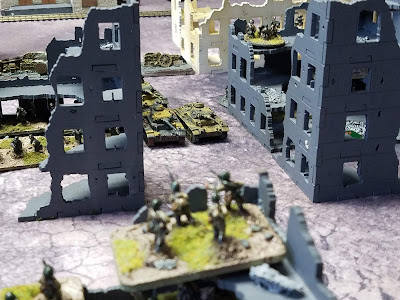 Ken's force is getting whittled down, but he's dangerously close to the office building objective.  Dave, with iron nerves, still hasn't committed his storm group yet.  Ken attempts to suppressed and keep pinned the Soviets on the main objective.

Hard decisions and tough choices by both sides.  For Ken, when to assault?  Is the enemy sufficiently whittled down to support going in with grenades and bayonets?  For Dave, when to commit the assault group and where?  MOst of Dave's rifle companies, if not all of them, are pinned and they can only defend in place.  Ken's rifle platoons are decisively engaged and he's feeling the loss of the assault engineers now, having to do the work with rate of fire "1" when moving infantry stands. 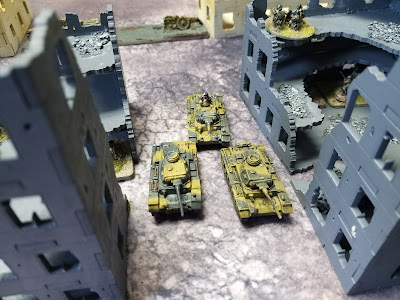 Dave, sensing the time is right, commits the storm group on turn 5 next to the objective.  Dave has the rifle company from the red house also closing in the from the north.  Ken also knows it's "do or die" time and prepares to move onto the objective and assault the office complex. 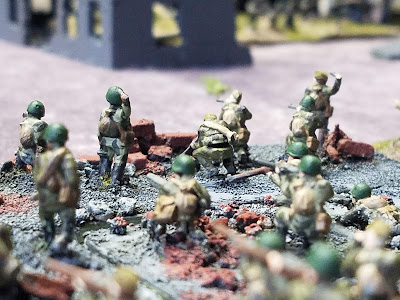 Ken spills out onto the street to assault the building.  He needs to keep within 8 inches of the objective on or after turn 6 or risk a Soviet victory.  The defensive fire from the assault is enough that Ken's men get a foot hold on the office building, but they don't hold the objective yet! 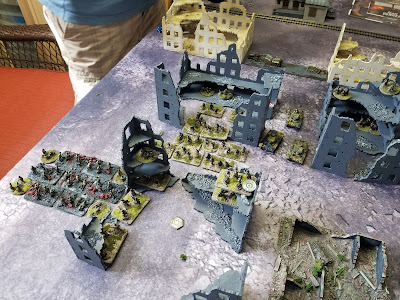 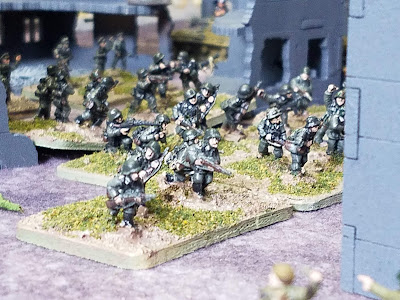 Ken's assault is pushed back by Dave's counterattack.  Even with no commissar left, Dave rolls a 6 and the Soviets counter attack pushing the Landers back out.  A quick counter attack by Ken with his Company Command team and the platoon commander from 1st Grenadier Platoon gets them a toe hold back in the building.  THey're within 8 inches of the objective for now!  Desperate fighting by Dave's rifle companies sees wave after wave go against Ken's command group but they're repulsed.  A final attack eliminates the company command team and Ken concedes.  His final supports, the panzer III platoon ran into problems of their own and were surrounded in the streets. 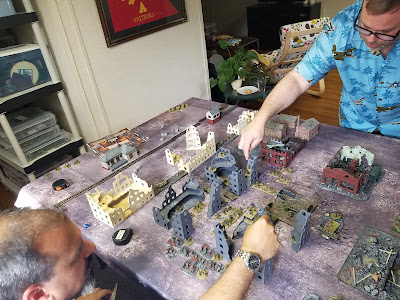 A great game!  We were originally going to play a Cold War Battle but I ended up deciding on a WWII battle thinking we'd have some new folks over to play.  It ended up just being Dave, Ken, and I and WOW what a battle.  Definitely some fun highlights to review:
The Soviet defense of the department store will earn this unit a place in my Unit Citation section of the Blog!  Dave's 4 stand "company." whittled down to a single squad (2 x team stands), an MG section, and Commissar Team, held out until the very end, and the department store, assaulted no less than 4 times, held out!
Ken's EPIC over-the-top style assault, and desperate defense with the company command elements and the 1st Grenadier platoon against relentless Soviet human wave assaults on turn 6 was legendary.  Iron Crosses all around.
First time we used AAA in a WWII game, and while it hit a Stuka, it was not able to bring it down.  The Luftwaffe destroyed a KV-1, and a battery of 122mm artillery in the rear area.
Just like our previous Stalingrad game a few years ago, the frontline-trace moved about 8 inches over the course of the game, with all but 1 German thrust being defeated at the line of departure.  Pretty historically accurate I'd say.
So while I did not end up using "every" toy in the arsenal, there were a ton of Soviets and Germans on the table and this is exactly why I maintain the huge forces that I do - for big games like this.
All in all, a great day of gaming and hanging out with friends.  Just what I needed for this long, Independence Day weekend.  Working on the Eylau project now and spying the Gaming Calendar for what comes next!

Posted by Disgruntled Fusilier at 11:07 AM