I concluded the Battlegroup: Vietnam game I had planned on playing for all these months with satisfactory results!  (If you have not read part I, read the post previous to this one for some background).

US Forces fought off a determined NVA assault as they left the Landing Zone (LZ), battleing for key terrain next to the road (high ground and a forest which the US forces were using in the defense).  If the first NVA assault succeeded, the US forces who had already moved out would be cut off from their LZ and subsequent reinforcements.  So part one ended with a US tactical shift after the defeat of the first major NVA push.  That battle resulted in the loss of an entire NVA infantry platoon, as well as about an entire US squad.
The US forces re-orient themselves on the cache locations on the other side of the creek and moved out, only to receive direct small arms fire in a "classic L-shaped ambush" from around the culvert and bridge area. 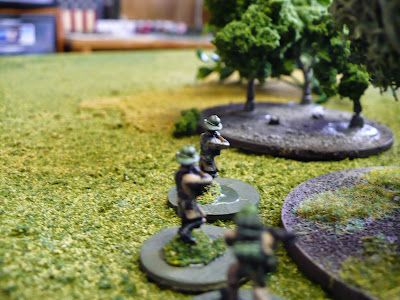 "Uncommon valor was a common virtue" today as the lead US lead fireteam took heavy fire with 2 men down along the creek side.  The 2 remaining men stayed with their wounded/dead and returned such a hellish fusilade that the NVA squad beat a hasty retreat!  Reinforcements eventually showed up and finally the UH-1C gunship arrived at the scene to pepper the far bank and those pesky ambush positions. 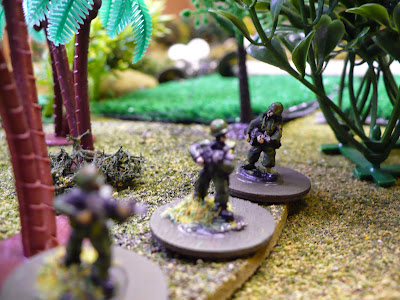 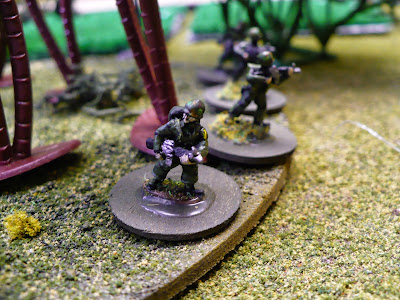 The loss of that one squad proved too much for the NVA and they reached their breakpoint of 18, ending the game.  That was a little disappointing as I really wanted to game the US sweep through the forests to find the caches, but without any resistance, the US force is unlikely to meet any more NVA troopers during the search operation.  This battle has ended!

Excellent game.  As I've stated on many occasions, the Battlegroup system handles modern combat very well.  The uncertainty of the amount of orders you'll receive pretty much guarantees that you will not be able to move all the units you want to move.  You have to really think about what you want to push forward because they might be out there on their own without much support for a turn or two.  Can you afford that?

I was lucky that the US had such a good Battle Rating (21) and that they were primarily on the defensive for most of the game.  The NVA player launched counterattacks at every opportunity and that got him used up pretty quick. So there's a word to the wise...

This was a "Squad" sized battle, so it was tough on some turns to get all the orders to move the entire force where I really needed it to go.  The small teams that did get the orders, were fighting for their lives until "the Cavalry" (quite literally since these were 1st Air Cavalry troopers) showed up.

The helicopter gunship supporting the operation went through some metamorphosis during the game.  At first, I treated the chopper like a separate maneuver unit, able to fly around and blast things at will.  Well, from my own experiences, Air-Ground coordination is huge and friendly fire is and was always a huge issue.  Even today in a counter-insurgency environment, our AH's don't just go around blasting everything in sight.  So I restricted the gunship use to the following rules:

A ground spotter - leadership or the Forward Observer - must always have LOS to the gunship target, and a successful request for fire must be adjudicated.  This ensures that you don't have this helo tearing ass around the battlefield, shooting everything in its path.  There is at least some air-ground coordination required!  This makes its use much more restricted and in my humble opinion, realistic.

On Modern Weapons:
The modern weapon systems integrate very well with Battlegroup.  Assault rifles, recoilless rifles, RPGs, and even helicopters were able to operate without too much brain power (always a good thing) and Battlegroup has sufficient rules to accommodate these "new" weapons without having to change much.

I did notice that the hellish US LMG teams were constantly targeted by the NVA and with 2-man teams, this makes for a very short lived career on the tabletop.  In fact the US losses amounted to 2 x M60 teams, and 1 US fireteam in all.  (isn't there a quote out there about the life expectancy of a US M60 gunner during a firefight?  Or was that a second lieutenant?)  So maybe your squad's M60 teams should have 3 Soldiers in them.

Artillery:
The US Artillery was very disappointing, as was the NVA 82mm battery on standby.  While I only spent the points for 2nd Priority request, ostensibly both fire support units were on standby supporting the operation.  The only successful 82mm call resulted in a wild spotting round and cancellation of the mission, while the US 105mm heavy stuff never even arrived.

Here's what needs some work: the United States has always been on the cutting edge of Artillery "customer support" and the US trains most of its leadership and even soldiers on the call for fire.  Thus, the call for fire should be streamlined from the WW2 procedures and made somewhat easier given the distributed training and the much-improved communications.  (failing the commo test should really be a one time or two time deal for western armies if you're fighting past 1960).  Not even speaking to accuracy here.  I'm okay with the spotting round and Fire For Effect procedures, but the CFF should be a little easier.  I will work on that for subsequent versions.

Special Rules:
Paul OG and I have emailed back and forth about some of the US and NVA special rules and there are many!  Some of the rules I used in this game made the game very interesting, without making any one side too potent or dangerous.

Masters of Camouflage:  NVA player in terrain (not in the open) always counts his cover saves as 1 better.
US Call for Fire: All leaders, including Squad Leaders could call for Artillery or Helicopter Gunship support.

Ambush Placement: This worked well, although since the US player didn't arrive where the NVA player though he would have, it was moot.  More thought needs to be put into this rule, as I believe it is necessary for any Vietnam game if playing the NVA or VC, however it needs to be expensive as a squad popping up where you didn't expect them is a pretty big deal in Battlegroup.

Mines / Wires / Booby Traps: The US player as a matter of rule emplaced claymore mines on the defensive.  There should be a rule for this making claymores really, really lethal.  While this was a fairly mobile battle, I think some of my next battles could feature the famous (or infamous) claymore.
Posted by Disgruntled Fusilier at 11:21 AM