Harking back to my 12 April post regarding Fireteam and Squad level organization during the Vietnam war, I am finally ready to sit down and play a game of "Battlegroup: 'NAM" which I've really been looking forward to ever since I finished both my US Army infantry platoon and my NVA regulars in 15mm.

Paul OG was generous enough to provide me with weapon-conversion data from the actual  Battlegroup series and we came to the conclusion that the North Vietnamese will operate within a squad as their base unit.  As Paul said on the 12 April post: "For the NVA it might be worth considering having them fielded as one big group.  Less flexibility but also less points to activate so it's easier for the Communist player to get the human wave effect"  The US side will operate with fireteams as the basic unit of maneuver, within the context of their squad and platoon.  There will be a US Artillery Fire Support Officer present to act as FO and coordinate fires as well as helicopter gunship support.

So my basic scenario plan is a US Army infantry platoon conducting a patrol with the mission of searching for 2 weapons caches located within a very rural area of responsibility.  Basically, the US Infantry will Air Assault in, and I will dice for helo arrival as the size of the LZ is variable and can only accomodate a certain amount of helicopters so the remainder are "orbiting."


"Clash of Reconnaissance" was the first scenario that came to mind with escalating forces on the table which seemed appropriate until I thought about hidden NVA units.  The Communist forces the United States faced from the 1950s through the early 1970s in SE Asia (NKPA, ChiCom, NVA, and VC) were literally THE masters of battlefield deception and camouflage.  (read SLA Marshall's "Pork Chop Hill" if you want an example of Chinese battlefield infiltration and camouflage.  It will make the hairs on the back of your neck stand up how they could mass entire companies and remain unseen).  They should have an inherent ability to ambush American forces at will.  Therefore the "Ambush Fire" rule from the Battlegroup series will also result in unit placement on the table as well, with the NVA units being placed on the table when their ambush is sprung.

US "recon by fire" will also be a rule I want to try out.  Suspected NVA positions can be fire upon and if they fail a morale check, they return fire (much like Arty Conliffe's infamous rule in Crossfire).

Some Considerations for Battlegroup during this time period:


So for this scenario aptly called "Air Assault!" here is how things should go: 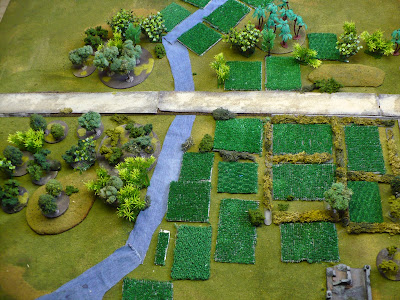 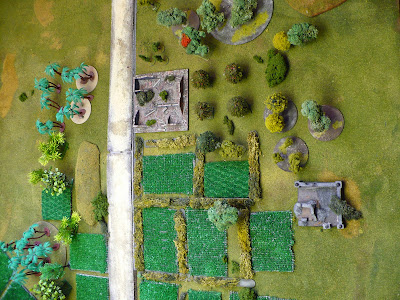 Posted by Disgruntled Fusilier at 2:58 PM