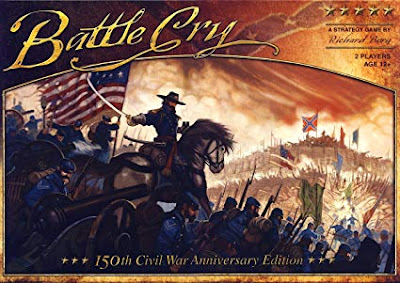 While I really enjoyed BattleCry when I played it, it seemed a little too "high octane" for me when assigned only 9-10 units to play an entire battle.  We were blowing through the entire battle of Antietam in an hour.  I wondered how a game would go with more units?  Or perhaps historical units scaled down at the Regimental level?

Enter Scott Mingus' "Enduring Valor" Gettysburg scenario books, written for combat at Regimental level, where the player is maneuvering Regiments around using the Johnny Reb III rules.  You might recall I did a series of blog posts where I created a scenario for Norm's outstanding "Two Flags-One Nation" hex-based rules which are also at Regimental scale.  I then fought that exciting battle using Norm's rules with historical results.


I have to admit I've been wanting to tinker with some BattleCry scenarios ever since we played Antietam with BattleCry last year.  So this time, instead of playing Oak Ridge again, I thought I'd pick a different scenario this time around:  Seminary Ridge!

The first volume of Enduring Valor has some excellent scenarios for the first day of Gettysburg, including some of the battles for Herr Ridge, McPherson Ridge, and Seminary Ridge.  The Seminary Ridge battle looks to be a great standup fight, perfect for a game like BattleCry.  So with that in mind, let's take a look at some stats:

Johnny Reb III operates on a scale where the basic unit of maneuver is the Regiment.  BattleCry seems to be pretty flexible with unit representation, and I feel like that is in line with the design ethos of the Commands and Colors System.  If I make a unit a Regiment, it's not going to break anything.  CHECK!

BattleCry does not utilize a time scale and so the 20 minute game turns will not factor into this at all as I see time as variable each turn.  CHECK!

While BattleCry does not distinguish much in the way of unit characteristics, I think I can do that by giving units that were either historically very stubborn, or very large more hits.  I'll have to use the troop strengths to figure out an average.  Naturally this average will have the standard number of hits for a BattleCry unit.  CHECK!
Looking at the stylized maps for BattleCry, I'm going to need to get a little bit creative as to where the units start but I think you accept a little bit of fudging when you buy into a Commands and Colors game in order to make the field a bit more linear.

How do you win?  Well luckily I have good parameters in the Enduring Valor book.  The Seminary Ridge fight, the Union must inflict 40% casualties on the Rebels, and hold at least 1 major objective (there are 2).  To me, this equates to the Union knocking out 5 Rebel units, and holding onto 1 objective for a total of 6 victory banners.  So the victory conditions are 5 units knocked out, and a victory banner seized.

Orders of Battle and Command Cards

Confederate Troops
According to the write-up, these units assaulting Seminary Ridge were some of the best infantry units in Pender's Division, McGowan and Scales' Brigades.  The OOB is as follows:

Confederate Command
The Confederates have passed the battle onto Pender's fresh division to continue the attack onto Seminary Ridge.  They are fresh and have good troops committed to the attack.  The Confederates receive 5 command cards.

Union Troops
The Yankees have an amalgamated force of units who have fallen back from Seminary Ridge including the beat up but still elite Iron Brigade, the Pennsylvania Bucktails, and elements of Rowley's 3rd Division with New York and Pennsylvania troops.  They also have a very significant amount of artillery support, which is credited with enabling the battle-worn Union troops to hold out as long as they did.

General Wadsworth is present as is General Doubleday.  Doubleday will not be represented however Wadsworth will be on the table.

I will likely not include each battery as I believe that might REALLY unbalance things.  Instead I'll consolidate 2 batteries into 1 single battery, giving me 2 batteries of artillery.  Historically, the artillery served as a bulwark for men retreating from Seminary Ridge as a place for them to rally behind.  You really need to have the Union artillery present for the scenario.

Union Command
Doubleday is now commanding 1st Corps after Reynolds is killed in action.  He has done a decent job of commanding Corps through the mid afternoon and fighting the Rebel advance.  He also has a brace of tough, experienced brigade commanders serving under him who will add to his command.  The Union troops get 5 command cards.

Smoothbore Muskets
Even though BattleCry is supposed to be a "big battles" kind of game, at Regimental level you can really geek out over things like unit armament.  The 1st SC Infantry had smoothbore muskets and I'm inclined to give them 1 less fire die, but allow them a standard amount of melee dice.  that would be a cool addition to the game.

The Map
The trickiest part, but I was able to do this pretty seamlessly for the Oak Ridge scenario using squares, I'll use hexes for this one and see how it turns out.

From the picture, the map is divided into 1 square foot increments.  These will conveniently fit 9 hexes inside of each, giving us a 12 by 9 hex battlefield.  I'm content making the Commands and Colors battlefield sections each 4 hexes wide, instead of 4 / 5 / 4.

Here is the map with the sections on it.  The Confederate left is completely clear of units.

So that's it right now.  I'd like to set the table up tomorrow and see how it looks!  If it's too difficult with hexes, I might try for squares but my preference is to play it with hexes.  I also need to brush up on the rules for fences, obstacles, etc.  Like any ACW game, there is a huge need to put in lots of fences.  I can tell you right now I dont have enough!

This seemed pretty easy to do, since Mr Mingus did all the hard work for me!  If I had a decent hex map creator, this would be even smoother.  Next step is to try my hand at the hex map and see how it goes.  I am also on the hunt for more sources of Regimental  ACW scenarios.  From my understanding there are some good ones on Wargames Vault so I'd like to look there.

Posted by Disgruntled Fusilier at 8:25 PM