As noted in my 2019, 2018, and probably 2017 reflections, I haven't played much American War for Independence games.  That's sad considering AWI was really my first foray into historical miniatures gaming after microarmor.  I really tried to get the lads on the table and played a few One Hour Wargame matches, but it never stuck.  Well that changed today when Dave came over and we broke out Osprey's "Rebels and Patriots" rules, and some of my 15mm AWI miniatures! 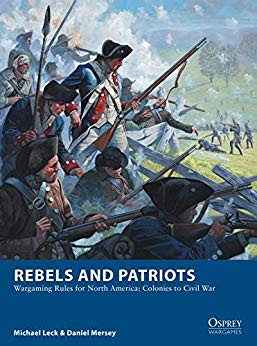 We played with smaller, 22 point armies and played the first scenario in the book, the battle at Lament Ridge.  The British were the attackers, with a 22 point company consisting of 4 line units and a single "light" unit.  I played a strictly militia unit with 5 green "line" units, and a single "minuteman" skirmisher unit.  We rolled for our officer traits (you do that in this game which is neat and adds some character to the table).  Suffice to say that none of the traits we rolled for really mattered in the game as there were no artillery pieces and no defenses.


The game has a neat system for activating units where you have to beat a 6 or better on 2d6 to allow the unit to carry out an action.  It's seems easy enough and your commander gives you a +1 to activate, which is super helpful if you are milita and automatically get a -1 to your activation rolls.

My sharpshooting Virginia farmboys were incredibly lazy and failed their activation roll probably half the time.  What's up with that?!?!

The "blunder table" for rolling snake eyes on your activation rolls has some very unforgiving things that can happen to you I will say.  Although we didnt track this, Dave and I both would have lost a few "honour points" in the end of the game (more on this later) for BOLO'd rolls on this table.

While this game is more of a "detachment" or platoon scaled game, I played with my normal 15mm units, where a stand represented 2 figures.  It got a bit finicky once or twice, but played fine, and I enjoyed the spectacle of the larger looking units anyways.

The move and shooting values are quite generous in this game and it means you come to grips rather quickly.  Even though we played in 15mm, we kept ranges as-is for this game.  I wouldn't mind halving the values to make the ranges look a little more realistic.

My minutemen reach the ridge first and using a skirmish order, open fire on the British light bobs who are climbing up the steep slope on the other side!  The ball has opened!


Dave scrambles his line units to get into position around the hill.  His plan is to surround teh hill with close ordered units and basically evaporate any unit I leave in the open.  It's a good plan and the shooting forces my skirmishers back.  Meanwhile I'm struggling to move my line troops further up. 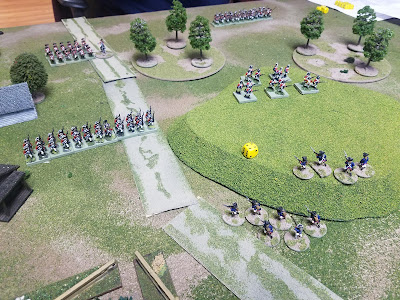 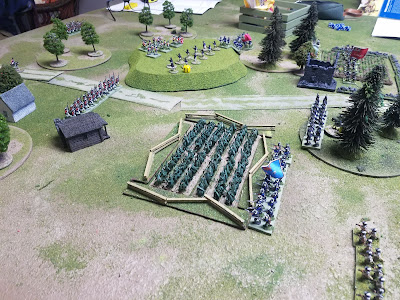 Dave's having crap luck with the dice and while he's getting to reform his units into close order, the ones who are already in close order are just not passing their rolls to activate and fire!  My troops are consolidating their positions in the meantime!  I have a state line unit brought up to reinforce the lights on the hill while Dave's regulars can only watch!


So far no one has been disordered but that is about the change very soon as I roll my first "snake eyes" in an activation roll.

The game "seems" like it's going my way but it's only turn 4.  While I have been on the objective for awhile now, the British are moving into position and close ordering their troops to fire on me from multiple directions. 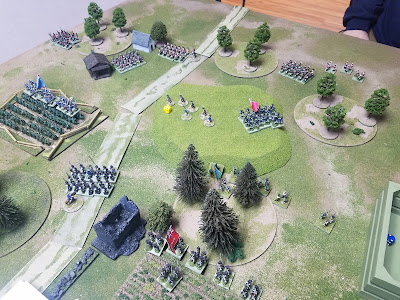 I learn the value of close order troops whose fire is deadly.  While close order is a very unwieldy formation, it shoots and fights with great effectiveness.  Dave shreds 2 of my lead line units and I've already pulled the minutemen back.  I need to start getting my boys to shoot!!!


Dave starts getting his rolling skills back and a horrifying volley takes out 2 and a half stands instantly!  They fail the morale check and go disordered. 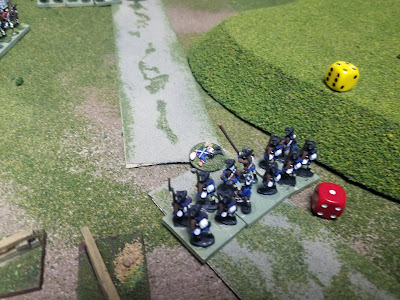 Meanwhile the militia on the hill go disordered, too.  Yikes - trading shots with British regulars!  There has to be a better way! 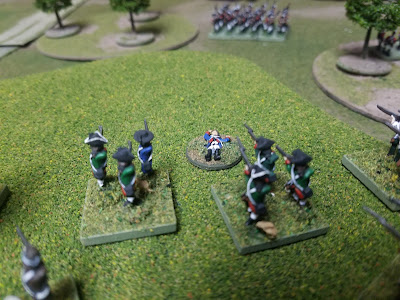 Speaking of better way, my Virginia Farm Boys finally earn their pay - they unleash a deadly aimed volley at the British to their front who break contact, fail their morale check and retreat back into the woods!  The left flank has been successful, but I have not been able to concentrate my fire.  Dave hasn't lost a single unit even though he's been taking casualties.  I've lost 3 units already!  9 out of 22 points!  When you get to 50% you take a company morale test!


On turn 9 we rolled to end the game and rolled a "5" which was enough to end the game.  We both looked up how the game ends and it turns out this game was a draw!  I was on the objective the longest and therefore my officer earned 3 honour points.  Dave took the least amount of casualties, 1 honour point, and infllicted greater than 33% casualties on my force, another 2 honour points.  Pretty neat way to figure out who won!  I was really on the ropes, though, and if I had lost another unit, I'd be over my 50%.  Plus Dave "severely wounded" my officer figure.  (his made it out without a scratch - hardly surprising for "old browntrousers"!) 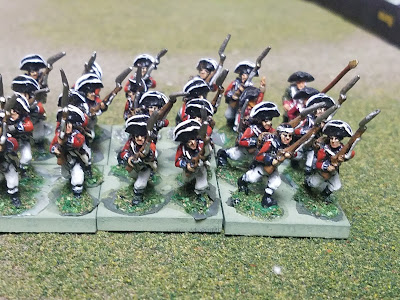 Thoughts
Well we both really liked the rules.  First of all they are light-hearted and don't take themselves too seriously!  Units can come to grips quickly and the game gets down to the business of fighting which is great.  I feel like the game had a decidedly "AWI" feel to it, and I will definitely play them again.  It was a little finicky with the multiple figure bases but we were able to get through it pretty easily and pretty quickly.

What I liked about Rebels and Patriots:
I love the shooting system whereby 2 hits remove a figure in the open, but it takes 3 hits to remove in cover or at long range.
I like the unit builder system which allows you to make neat combinations of 24 point units.
I like the generous movement and firing distances (probably meant for 28mm figures)
I like the officer traits and I really like activation system for individual units.
I like the scenarios in the back of the book as well as the generic force lists in the back.

What I disliked about Rebels and Patriots:
The things in the rules are quite scattered and in various sections.
Not everything is explained well (company morale checks)
Lots of things to remember each turn (this is why everyone has been making rosters for their companies - very smart!)

So after playing this, Dave and I really want to play more AWI, which I suspect you will definitely see more of this year.  Also, after this past week's "Little Wars TV" video, we are both hankering to play Fire and Fury!  Something I haven't played in quite awhile, but used to be my absolute favorite ACW rules.

Posted by Disgruntled Fusilier at 7:29 PM