Fighting the Battle of Hubbardton with Live Free or Die!

Ken came by today and we played our first game of Live Free or Die using my Battle of Hubbardton wargame scenario put out this past week.  This battle was more of a playtest for me both with trying out  the rules and to see how my scenario played out.  Ken and I finished the game in 2 hours and that probably was a bit long for the small amount of units on the table.  So how did it go??  Let's get into the battle.

Ken and I stumbled a bit through the first turn regarding the sequence and when to do things.  While it becomes obvious as you read your way through the sequence, it's not obviously apparent when you allocate your command points.  (you do so immediately)  It does become second nature though as you work your way through the turn sequence, turn after turn.  Anyways, you roll D6 per command "star" for the scenario, so the British roll 5D6 and the Americans roll 4D6.  Every 5+ gives your command an additional command point for the turn.  The British move Major Acland to the 24th Foot to assist in the upcoming combat.

(this is also not completely obvious from the rules - when do you move leaders who are NOT attaching to units? We moved them during the command actions phase).

The British start immediately with a "British Bayonet Charge" order, costing Fraser 3 command points (!) to launch the charge, and 1 command point for the movement!  (Fraser only had 4 this turn - so the lights and Grenadiers are staying put on the road!)

The 24th Foot charges through the skirmishers (and the invalid camp) and pushes the skirmishers back.  A very nice introduction to the charge and melee rules and Ken's "hasty" skirmisher fire doesn't do much to stop the cold steel of the 24th Foot.  The skirmishers head back towards the wooded area on the hillside.  The 24th cannot proceed and are halted for the remainder of the turn since they only won by 1-3 successes (5+).The

0650-0710 Hours
The next 2 turns, the British push across Sucker Brook with the Lights and the Grenadiers move up.  All are still in column.  The Americans have moved to the stone wall now and are watching the British march up.  The 24th Foot wheels left and is facing the top of the hill now.  They'd march into musket range and begin a furious exchange of volleys with the 2nd New Hampshire.

Meanwhile I kick out the Loyalist Scouts to maintain contact with the American skirmishers.  Probably did more in the first 3 turns than they did in the entire actual battle but still wanted to include them in the game because they're alot of fun. 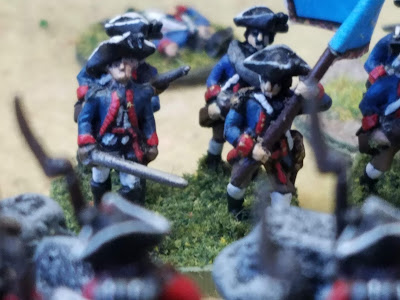 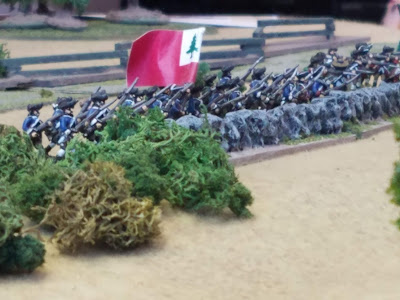 8:10-8:30 Hours
The lights advance through the woods on the hill and it takes 2 turns to pick through the bramble, and felled trees.  The Grenadiers, who historically moved with swiftness to the Selleck Cabin, turn up the hill in column and form line, eager to challenge the Green Mountain Boys to their front.  True to history, the lights will face off against the 11th Massachusetts. 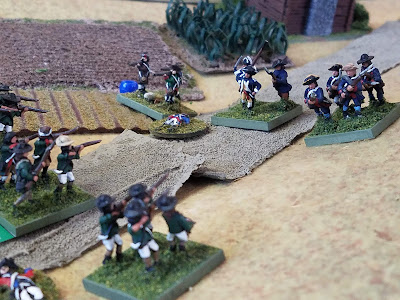 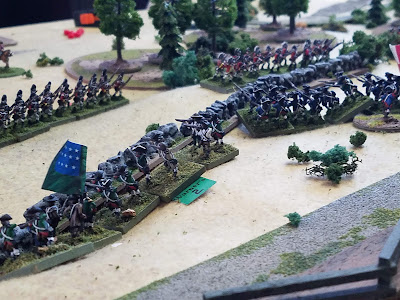 By 8:50am, the lights emerge from the woods and assault the 11th Massachusetts at the stone wall!  The DMZs accumulated from marching 3 turns through the woods, however, and lack of a superior officer attached to help rally or assist in the combat see the odds of success significantly reduced, and the lights take a bad beating at the stone wall.  They'd retreat to the safety of the woods, down 2 stands! 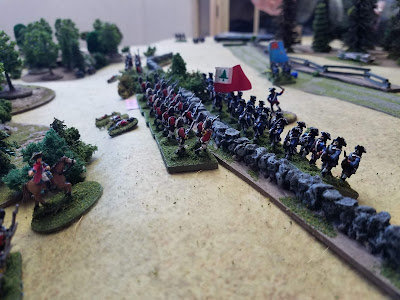 Ken, also full of surprises today, launches the Green Mountain Boys, Warner's Own Continentals, against the British Grenadiers (as they did, historically!).  The Grenadiers are locked in an inconclusive round of murderous, close range firefights (leading to another question - If you're "locked in combat" after an inconclusive round of melee, and you both lose a stand, do you both take a morale check?  If the rules are to be interpreted literally, I guess yes?

0910-Endgame
With the ejection of the Lights from the stone wall and the inconclusive nature of the Grenadier combat, we called the game, 2 turns OVER the turn limit.
What Happened?
Well neither side achieved their major objectives.  (although I as the British player forgot to bring on he Hessians so technically there's that - I'm sure that would have made BG Fraser happy :)  )The British did not capture the Castleton Road exit, or the Monument Hill objective (that honor should have went to the Lights, who were pushed back and ran out of time).  The Americans did not retreat off the table, but did preserve two-thirds of their force, which was part of the tactical victory conditions, so this was an American victory.
Looking at stand loss, the Americans lost 4 stands and the British lost 5 stands.  Stand Loss points cost for the scenario were Americans 1 point per stand lost to the British who were 1.5 points per stand lost to the Americans (the British could not as easily replenish their ranks).  So even if the Americans did not preserve 2/3 of their force, they'd have won by casualties alone (all of this is very historical, BTW).
One problem I did note with the scenario was the time it took for the British to get into position.
Technically, if you were to move in column all the way from the Sucker Brook, along the Road, to the Selleck Cabin, that should take you 5 turns (45" give or take).  With the British bayonet charge on turn 1, and the Sucker Brook costing 1/2 movement for units crossing it, that held up the Grenadiers and Lights for a considerable amount of time, both of whom lost a turn with 1/2 movement, and zero movement on turn 1 due to the 24th's bayonet charge into the American pickets (the expensive nature of bayonet charges meant that I did not have the command points to move the lights or grenadiers on turn 1, so in effect I lost a turn).  Turning the Grenadiers up the hill instead of moving towards the Selleck Cabin also cost me a turn since the Grenadiers had to change from column into line.
This is kind of a neat problem to have I think, being forced to make a decision to charge or move other units, but my fear is that is simply takes too long for the British to get into position to pull out a major victory due to making the Sucker Brook too restrictive.  I'll have to play it again to see.
If you try my scenario (and of course you should!!!) My advice is to try the game by STILL paying 1 DMZ to cross Sucker Brook, but not losing 1/2 move for it.  It's a stream, not a river or creek.
I suppose I could have volleyed with the 24th Foot on turn 1 instead of charging, however even with 10 dice (!) [4 stands x 2D6 each when volleying plus 2D6 for Major Acland] the skirmishers likely would have stayed put.  Meaning I dont think I could have shot them out of their position but you're free to give that a try.  Additionally, the Hessians never showed up, and they were sorely missed.  A fresh unit arriving on the American flank where the 2nd New Hampshire were forced back could have turned the tide.
So as far as the scenario goes, I will likely adjust the penalty for the Sucker Brook, otherwise this was a very good scenario, I think.  Lots of fun and no shortage of excitement.
I really enjoyed the "Live Free or Die" rules.  There are alot of unexpected turns of events in "Live Free or Die" with the morale rolls, officer casualty rolls, and even the uncertainty of the melees.  Ken seemed to enjoy the rules and the scenario and I'm hoping we will play again.  I have enough 15mm stands to play some of the bigger engagements of the war and would love to try, although there is also something fun about these smaller battles as well (thinking Wetzel's Mill, Edge Hill, and some of the "smaller" battles of the war with about 1000 - 2000 troops on a side) and this game took a little over 2 hours to play.  Perfect for a Sunday afternoon of gaming.  Mission accomplished!

Posted by Disgruntled Fusilier at 4:14 PM