This morning I was able to get a few rounds in of my big fight in a small town "somewhere in the Middle East."  American air assault into a village to seize a key road junction.  Enemy forces conducting a reconnaissance in force moving down to the village to see what's there and destroy it.

Neat game so far because there are so many different kinds of troops on the board.  For one thing, I've got really good American forces, with guts scores of 10 and 9, and the enemy has a mix of regulars with guts 8 and 7 as well as irregulars with guts scores of 7 and 6.  All different kinds of equipment too, from Javelin ATGMs to T-55 MBTs and even an old M113 on the table!  (by the way, this game has marked my very first mechanized assault using the Disposable Heroes rules).

The enemy comes on towards the town and the troops start to spread out.  The T-55 fires and misses and one of the US teams on the highest spot open fire, pinning a Martyr Brigade squad and KOing 2. 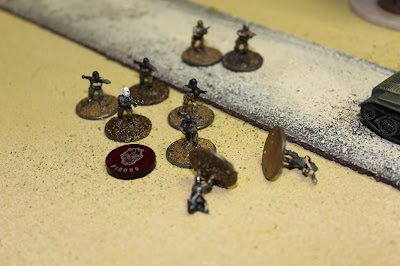 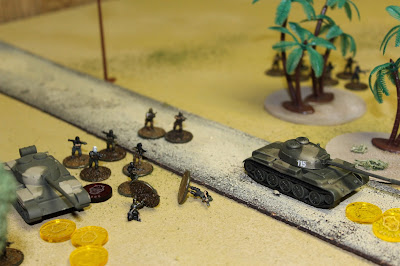 So far in turn 2, things don't look too bad for the Americans.  But in Disposable Heroes, units can rally relatively quickly from their first pin... 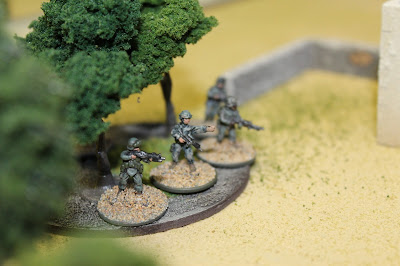 Turn three seems some jockeying for positions as the Revolutionary Guards and Martyr troops move into better cover and get a toe-hold in the town. The US player gets a spot of bad luck and misses with the Javelin.  Highly unlikely, I snort and chalk it up to either operator error, or a bad missile.  Which does happen occasionally.

Martyr guys are dropping left and right with their low Guts score they cower from the fire quickly.  The Guards troops fare a little better and are using smarter tactics as well.  Perfect for this scenario! 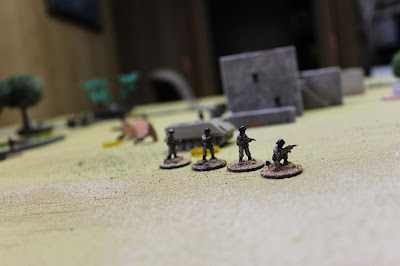 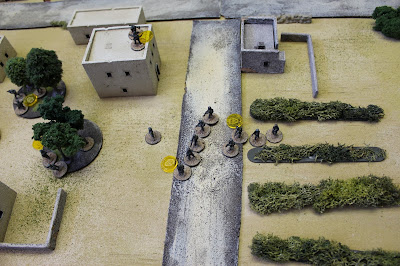 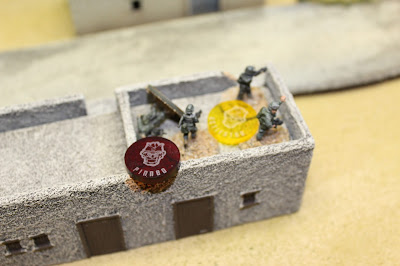 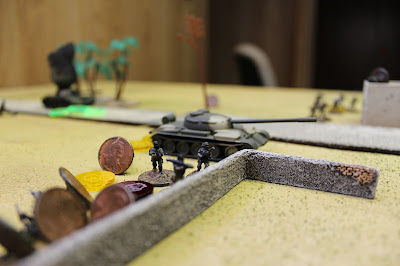 The action is just starting to heat up!  Tune in tomorrow as we learn the fate of these brave troopers!

Also another dud JAVELIN round?

The JAVELIN gunner spits in disgust: "You know I'm gonna call my congressman when I get back home..."
Posted by Disgruntled Fusilier at 12:42 PM

Email ThisBlogThis!Share to TwitterShare to FacebookShare to Pinterest
Labels: 15mm moderns, Disposable Heroes, moderns, seek out close with and destroy