So had an hour or so to kill yesterday before work and played a very quick game of modern "Flames of War" with my Micro Armour using "Stopping the Red Tide's" Modern Flames of War conversion rules.  (find his excellent work here and download it for free!).

Most of you know my thoughts about playing FoW with Micro Armor and this game did not disappoint.  Realistic looking ranges and no "parking lot effect" on the battlefield.  I think, had my terrain been better, this game would have really looked the part.

Anyways, force is a 1500 or 1800 point Regular Soviet Army (Reluctant Conscripts) T-64B company along with some ZSU-23/4 ADA, Artillery (offboard BRM-27 MRL) and Recce (2 x BRMs) advancing down the narrow edge of the map to seize an objective or 2 in their zone.  Like most of my FoW games, this game literally comes down to the wire with a few dice rolls on the last turn of the standard game.

The Pact advance is fast and the T-64 is a light tank and haul's a** down the battlefield.  The stabilization allows them to shoot at full ROF but with a modifier so most of the time, they're firing at the US M60A3's with a "6" to hit. 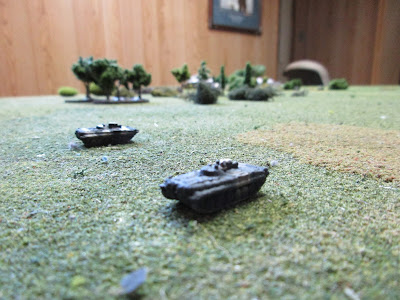 The stipulation for "Hold the Line" games and having the US troops on "delayed reserve" didn't do them any favors.  Also, NATO troops are quite expensive so I didn't have the points for Artillery or any "sexy" support options.  "MY COMPLIMENTS GENTLEMEN, ALL ELEMENTS ARE TIED UP AND UNAVAILABLE.  DO WHAT YOU CAN WITH WHAT YOU HAVE.  SIX OUT"

So NATO took to the field with 2 M60A3 platoons (1 in ambush off-board) and an infantry and ITV platoon in delayed reserve. 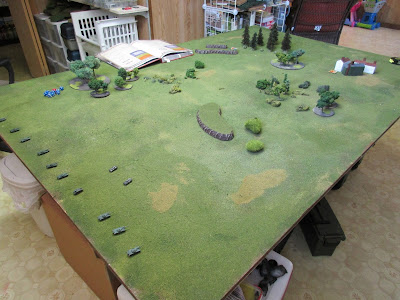 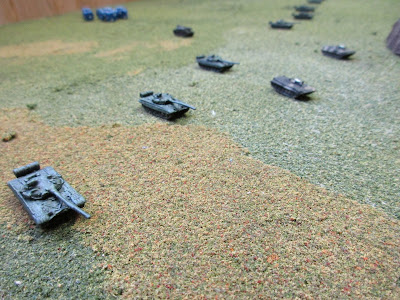 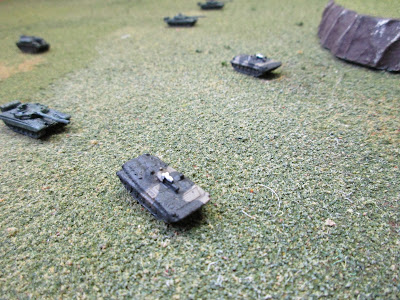 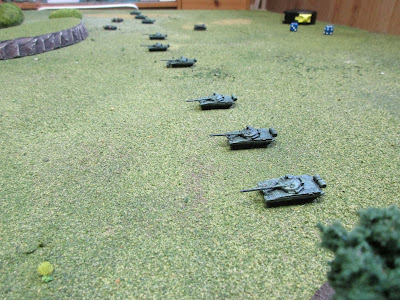 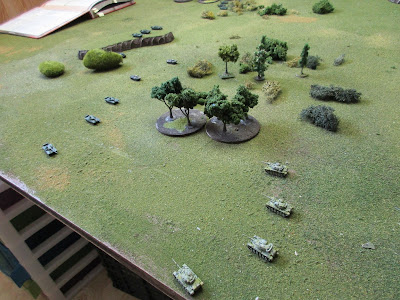 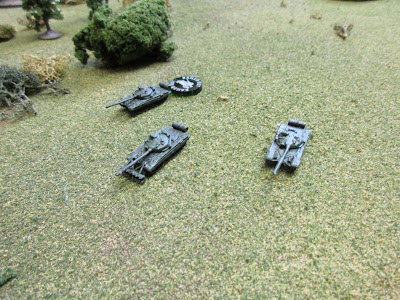 With the clock running out for Ivan, he makes a desperate move to seize both objectives using his superior movement.  The "Hold The Line" scenario dictates that he must start the turn in control of an objective to win.  No US tanker worth his salt was going to let that happen.  Cue the savage counterattacks!

I think one the more exciting aspects of FoW is the dramatic, final turn rush where you "go for broke" and rush your units across an objective.  Ivan certainly lived up to those expectations, and the US had to mount a desperate counter-attack to try and get him off the objectives. 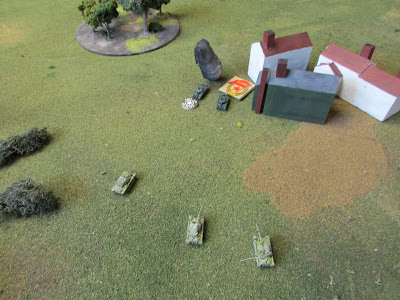 So the beginning of turn 6 saw no viable Soviet elements on the objective.  Ivan failed to remount both tanks in the village and a stalled platoon due to bailed tanks saw more KO vehicles and failed its platoon morale, bugging out.

Well the delayed reserves really hurt the US player this time.  I thinkt he task-organization was sound though.  You need all the tank killers you can get from the outset if you're going to be facing tanks.  I had the ITV's and Mech infantry on reserve.  The ITVs showed on turn 3 but the "little M113 that could" never made it up into the action in time to make any serious difference.  The infantry never arrived due to bad rolling.

If you're playing the NATO forces, you have better tanks more than likely.  Your ultimate dilemma is to keep them hidden behind cover, and move them out slightly to shoot.  The Pact forces got the first shots off and managed to bail a tank.  Ivan can't hit what is out of sight.  Probably best if I would have kept all of my tank platoons in ambush, then I would have gotten 8 shots off from both platoons.  Something to think about.

If you're the Soviet player, you have capable equipment but you cannot should not move every turn.  Recommendation (and I have no idea how the "real' FoW modern supplement will be) is to use some platoons on overwatch, keeping them stationary.  Had I brought along some wheeled infantry, I might have been able to sneak them by and get them lodged into a position.  Given that the US player didn't have any infantry, I don't think he would have been able to risk the casualties and dig them out.

Also, I feel that I wasted a support option on ADA.  I should have brought along tank killers or infantry, but I'll know better for next time.


Posted by Disgruntled Fusilier at 3:15 PM