Ken and I played a large-ish game of Sabre Squadron yesterday.  We originally had equal forces (1400+ points roughly per side) but the "Planned Attack" scenario called for 2:1 points so Ken added another Tank Company and a Hind-E helicopter.

The game played out with some unexpected results.  Read on. 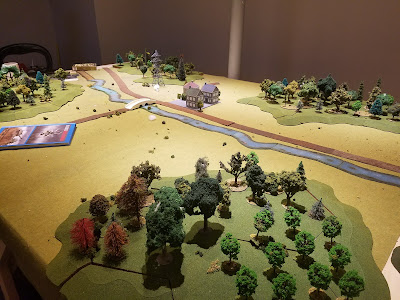 The game took awhile to set up and we had lots of rules questions from the start (programmed artillery for starters).  Having foolishly forgotten all of the important lessons I learned from previous Sabre Squadron games, I set up my American armor at the wood's edge with my logic being to shoot and then move back into the woods.  Big mistake.  Ivan's got the first turn (remember that.). 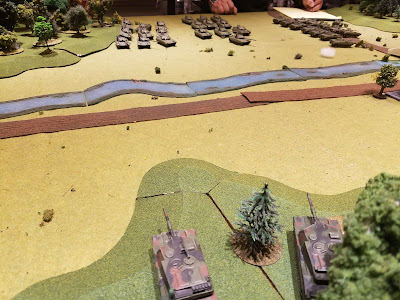 The programmed artillery (3 levels) kills me and knocks out a bunch of my tanks and APCs.  Big problems!  some surviving dismounted infantry teams are neutralized and all of my remaining armor are suppressed.  (not a big deal for AFVs luckily)

During Ken's turn, he fires with almost all of his T-72s at my M1s and knocks out the entire first platoon on the left, leaving 1 M1 alive on the right (the Platoon Leader's tank) who actually passes the morale check and stays to fight. 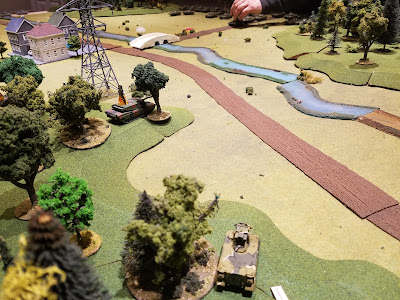 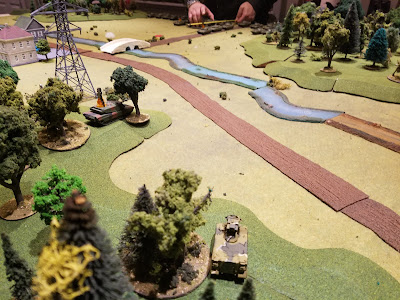 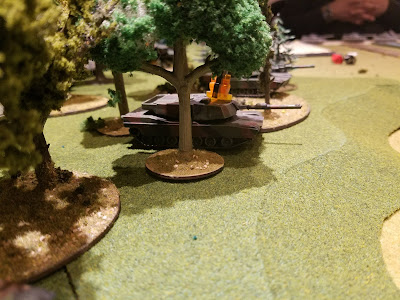 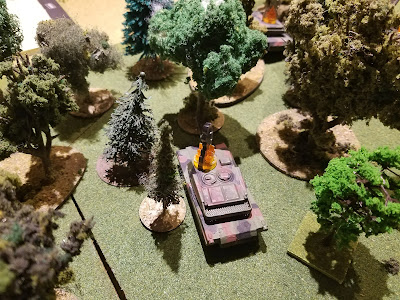 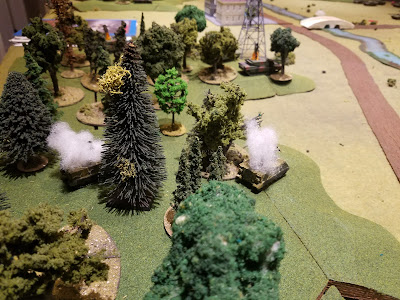 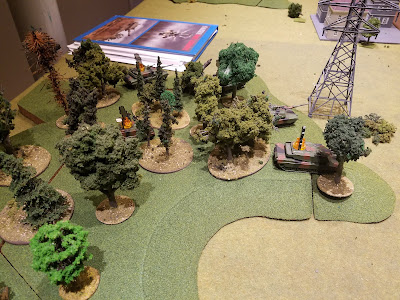 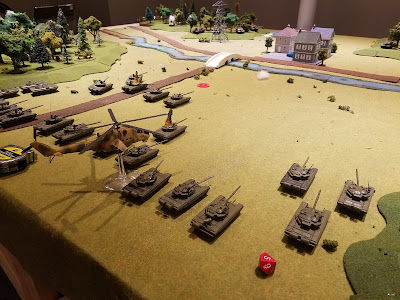 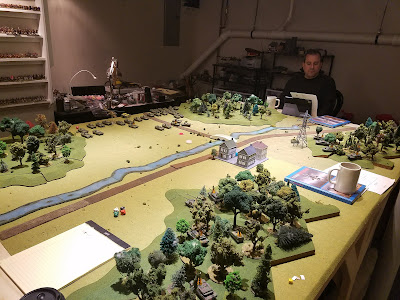 Thoughts:
This was nothing like my previous games of Sabre Squadron.  Part of that stems from me not reading the rules more carefully and not taking advantage of survivability measures like "hull down" positions and not starting further back into the woods.  I should have purchased mines as part of my battlegroup, and also should have incorporated a dozerblade or an engineering vehicle.

Hull down would have given me a better chance of surviving a hit from a tank.

Starting further back in the woods would have given me the ability to move forward and engage after Ken's first turn, instead of allowing all of his tanks to fire at me on his first turn, knocking out 50% of my on-table vehicles right away.

Also - the woods do not give AFVs any additional cover or protection except for remaining out of sight within them.

The issue of range attenuation did not really come into play at all either because due to my fire control, I only garnered an advantage at 36", Soviets at 24".  At the ranges we were playing at, all hits were at a 7+ on a D10 regardless of nationality.

And - in this game with both sides' armor and kinetic energy penetration, a hit was a kill.

Ken and I were talking about playing Sabre Squadron again with the same forces to see how it goes, trying all of the measures described above.  The game was sobering and very lethal.  Im hoping I can keep the Americans alive a little bit longer.


Posted by Disgruntled Fusilier at 3:33 PM