Ken and I discussed at great lengths the virtues of various rules sets both modern and WWII at our recent Sabre Squadron game.  In my rules quest for a solid set of WWII rules, I vowed not to rule anything out and in my personal opinion, Battlefront has had such a huge impact on the hobby that no discussion of WWII rules is complete with bringing up FoW, even with all of its merits and flaws.

Let's get one thing clear right off the bat - I am not a tournament gamer.  I'm a historical gamer.  I might be a historical gamer who loves a good pickup game, but I'd like my pickup game scenarios to be historically plausible.  I'd also like them to be fun, memorable, and preferably not last longer than 4-5 hours.

After our modern game series and discussions of late, Ken and I discussed both Team Yankee and FOW as part of a broader rules conversation about what we're after in a rules set.  I'm not posting to discuss any particular set of rules' advantages over another, I just want to discuss the results of this game and possibly how these rules can still fit into the debate.

I chose the "no retreat" mission from the V4 rules because it perfectly articulates the situation faced by the defending Germans during the massive Soviet counterattacks (with paratroopers!) to retake the Ponyri train station.  Their assault was so successful that they penetrated into the German lines for a day and held out against frightful odds until the unit was destroyed almost to a man.

The No Retreat scenario picks up with the attackers a mere 16" away from the defenders, another frightening aspect when facing Soviets because you know you're going to be in close combat.  The Germans did field mines though, which really helped even the odds. 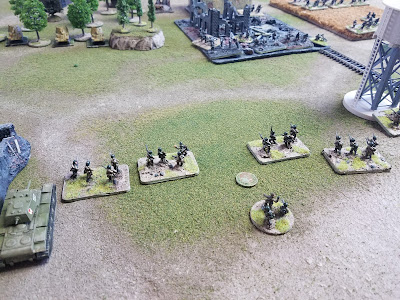 Turn one, left most Soviet platoon crosses into the minefield (the penny) and loses 3 stands immediately.  Ouch.  They're also pinned.  The Soviet KV-1s lumber around the bend and take out a Marder in a hide site easily. 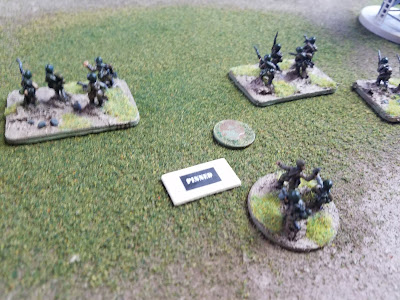 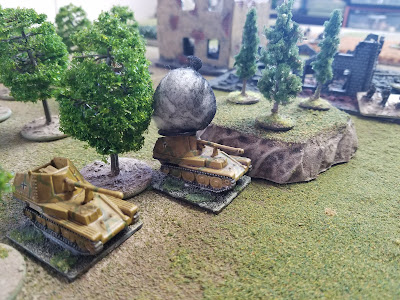 The Russians are close enough to do some damage on the Germans who can't dig in because they need to even the odds and shoot or perhaps because I just cant help myself....  The German infantry platoons are deliberately smaller to keep the scenario historical.  The Germans have been fending off Russian probes and counter attacks for days and the lines were perilously thin at Ponyri when the Soviets broke through.


Probably important to note here that only the Germans had indirect fire support in this game.  The Soviets had no mortars or artillery.  Just wave after wave of humanity. 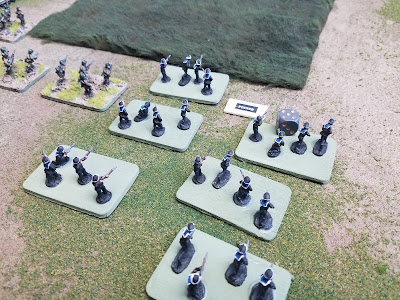 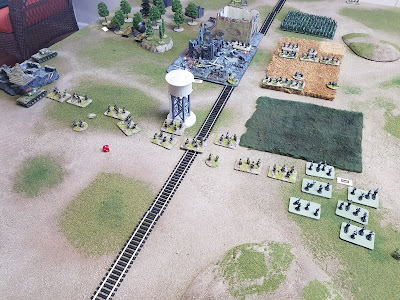 Return fire the next turn against the Marders sees a track bailed.  The platoon fails its morale check to see if it's still in good spirits and the remaining marder bugs out.  Tough luck too because those KV-1s are now roving machine gun pillboxes. 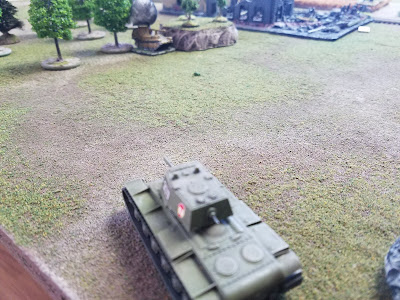 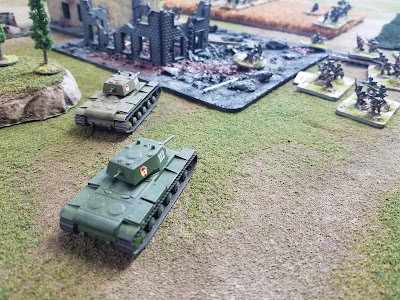 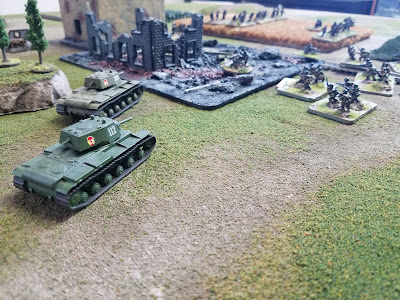 Ivan reaches the station with a very strong platoon still intact.  Fritz's machine guns can't cover all the space and while trying to keep the sailors pinned down (it's funny to read that), an infantry platoon slips right through the seam at the base of the water tower.  They rush the foxholes!  It's bayonet to bayonet, grenade, and E-Tool combat at its ugliest.  The combat eventually goes the Soviets' way and the Germans defenders evaporate. 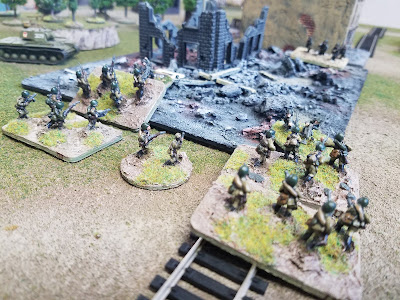 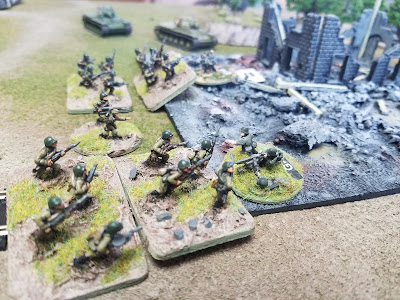 The next turn though, the Germans have their Final Protective Fires (FPF) pre sighted with their 81mm mortars and they shove a barrage right into Ivan's way.  This ends up destroying the victorious Russian infantry platoon.  Luckily for Ivan there are more volunteers for the motherland coming up to assist! 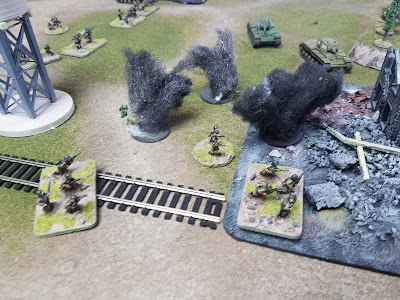 The Germans have a reserve platoon, their strongest, standing by to counter attack.  Right now they just want to block the Soviet's path to the objective so they occupy the train station building to defend it.  They don't call this fight "little stalingrad" for nothing. 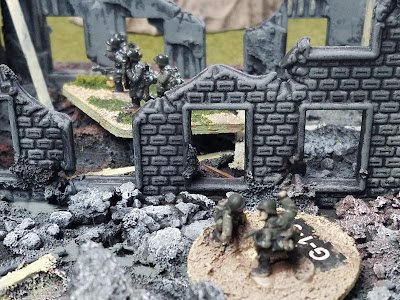 The Soviets get some great hits on the defending Germans and are able to move in for the kill.  The Germans still have their command team and the infantry platoon remaining and so their force is able to remain in the field. 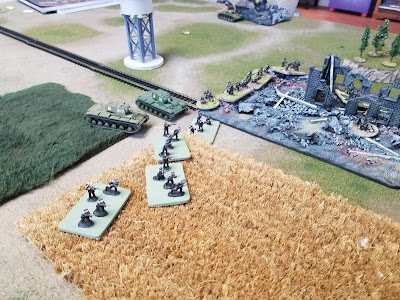 The pictures get better and better from this point on! 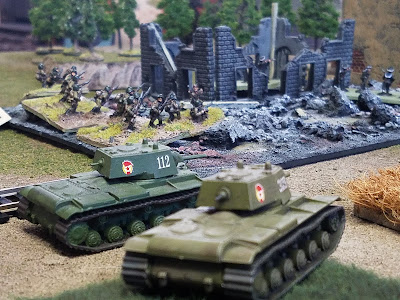 Thoughts:
This game played out in about 6 to 7 turns in a little over an hour with just me playing.  I may have cut a corner or two with line of sight for a single stand or what constitutes concealed but overall this game moved along very nicely, especially for someone who doesn't regularly play Flames of War.

I've admitted that my favorite WWII rules would probably have to be Battlegroup.  This game, played out in Battlegroup, would have taken much longer to play.  (platoon scale, probably about 30 BP per side).  There's nothing wrong with that either by the way, but for my inner megalomanic, sometimes you just want to play a massive game and you don't have an entire weekend in which to do it.

The mechanics in FoW are meant for tournaments, true.  They're streamlined and highly stylized but what they lack in finesse, they make up for with ease of play, timeliness, and the comprehensive nature of their rules.  I sometimes feel as if when I play FoW, I'm missing something, but I can never tell you what that something is.  (fog of war, friction, squad based instead of team based units are all things I like in a game).

It's certainly not detail or period flavor.  FoW caters very well to the balance of capabilities of the period, and it's not a stretch for me to rationalize the decisions that the writers made when dealing with the troops on the table.  The rules are very solid to me.

Lack of ground scale?  Ranges?  None of those things really bother me if the game can deliver on what it promises.

So I'd like to re-cap all of the things I liked about today's Flames of War game and at least ensure that it's still part of the debate.  The following are all aspects that I really enjoyed about this game:

o  Today's game I got the feeling of a battalion commander maneuvering platoons around.

o  Rolling all those D6 was fun.

o  Dropping my mortar Final Protective Fires on that victorious Soviet platoon after close combat was brutal, vicious and completely realistic.  I would have done that as Ivan broke through, had I been the real German company commander on the ground.

o  Pushing the teams through that minefield, Zhukov style, was alot of fun.

o  Watching my Marders beat-feet away when I still had 2 vehicles left on the table was heart-breaking.  One of the vehicles was bailed out meaning I had 1 AFV left.  The crew decided that discretion was the better part of valor and took off.  (I failed the morale test roll).  While I hated the fact that I had no more tank guns as the Germans, I loved that this was all completely out of my control.

o  Watching my elite Soviet Naval Infantry (aka The Black Death) sit there for 4 turns pinned down and not moving was heartbreaking but the narrative that produced was also memorable and gratifying.  More friction.  I had absolutely no control over these guys.

o  The game played fast.  Really fast.  A little over an hour with lots of dice rolled, small arms and HMG's fired, mortars dropped, and mines accidentally detonated.  Season that with a little dash of bravery, cowardice, elan, and desperation!

So if anything, I think I proved FOW's worth, at least in my mind, as a plausible game to recreate historical battles.  I'm not always crazy about the reinforcement rules, or the mission objectives, but I do believe you can find real battles and marry up the narratives pretty closely (IE Ponryi Station to No Retreat mission).

I'll play FoW again.  And quite obviously Battlegroup.  And Alex's rules.  But what's key here is that FoW are still on the table and will remain there.

Posted by Disgruntled Fusilier at 3:26 PM