So I set up a quick "pickup" game of Battlegroup (my modern Battlegroup home-brewed rules) using some modern Microarmor (a company of T-72s against 2 platoons of US M60A3s on the defense.

Not that it would matter much in the ensuing slaughter though...While I would not categorize this game as a "jailbreak" the Americans really had some nasty luck and the Soviets ended up breaking through in platoon strength.

The Soviets came on, charging through the gap and straight towards the Americans.  Each turn they lost a tank from the lead platoon and the company commander, Senior Lieutenant Ivanov thought it best to change tactics.... 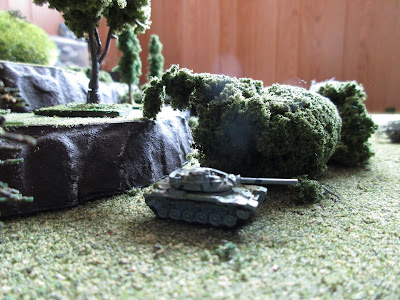 The Soviet company commander split the force against the nagging feeling in his gut that it was counter to doctrine, and sent one platoon around the base of the hill to his front.  Anything had to be better than running the gauntlet against these American tanks! 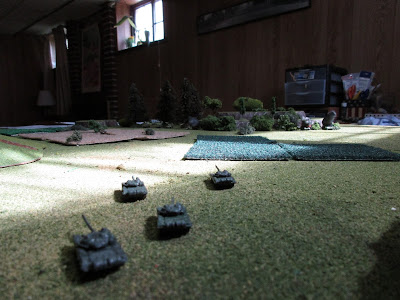 It's now that the American luck really starts to turn.  One of the M60s that shoot and scoots the previous turn hits a FASCAM or air dropped mine that may have been dropped by Soviet Artillery or SUs on day 1 of the war.  The rolling is solid and the mine tears through the tank just as it moves to join its sister platoon on the right flank.

Thoughts:  A really enjoyable game and the entire game played in a little under an hour.  This really has me motivated to iron out the points and actually create some Battlegroup-Friendly OOBs to game with until Battlegroup: NORTHAG comes out!  Battlegroup is starting to feel more and more like my "go-to" game.

As I was saying to Darren the other day, it allows a generous amount of tactical flexibility - that is, the battle is mine to lose or win and the choices I make are just as important as the equipment I'm using within the framework of the rules.  That's important to me.  Many games make you feel like you're just "along for the ride" sure there's a roll here or there, but I feel like I'm fighting the system of rules and not the enemy.  That has never once been the case with Battlegroup and I continue to enjoy it as a game and as an experience of WW2 warfare.

Also, Ken and I played a small game of "Third Generation Warfare" recently and while we spent a little more time looking things up than playing, it was alot of fun and I would like to play it again.
With all these microarmor and 1/100 troops I've got laying around, it would be silly in my opinion not to.  That and I believe the rules are complex enough that you will start to forget some key concepts if you don't play it every once in awhile.
Posted by Disgruntled Fusilier at 6:48 PM