Played a very short and very intense game of FUBAR yesterday seeing the first introduction of light armor into the game, this time in the way of my nice collection of M113 APCs.

Scenario was a simple one - US player, taking part in the invasion of Cambodia, must push across the board and exit his M113 platoon (3 x tracks with troops) from the opposite edge.  THe North Vietnamese player aims to stop him.  The NVA troopers set up in ambush positions - both are rated as "seasoned." 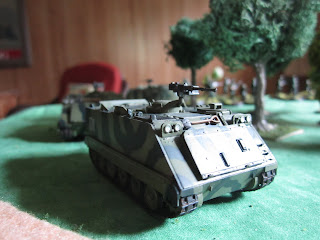 The game started off right away with an NVA team activating and pouring RPG fire into the side of a track.  2 hits, 1 saved and the crew is "stunned."  I take that as suppressed but they fail their subsequent activation roll and the dismounts are trapped inside... 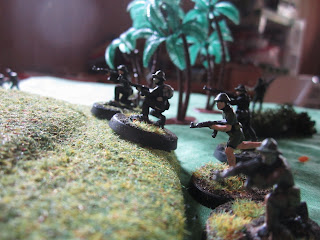 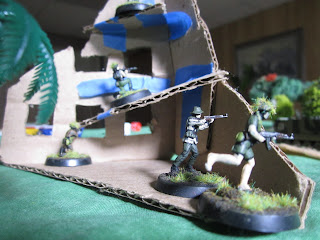 The NVA team in the ruins launches another salvo of RPG fire while the US platoon drives its tracks up to fight through the ambush.  US player loses an activation, the NVA player knocks out the M113 and the dismounts get the worst of it.  In FUBAR, each dismount is considered "hit" as the M113 fails its save this round.  I rolled for suppression/KO on each trooper.


By now the initial shock has been overcome and the US player starts maneuvering the armor to fire against the NVA troops in cover.  The .50 cals start doing considerable damage and are softening up the enemy infantry for the US troopers to assault through.  All in a day's work for the Cav!

The last of the NVA positions are rooted out and dealt with, actually with minor US casualties.  I'm sure that had to do with the softening up they received from the M113s prior to going in.  What an outstanding game!  Quick and brutal, I enjoyed adding vehicles into the mix as it added a new dimension and problem to the game to deal with.  The NVA had only 1 RPG launcher and would be hard-pressed to lose it, which they did in the first round!  There were a few other strategies I could have tried with the NVA player but I would have lost the benefit of ambushing.

DISMOUNT BEFORE DEATH: Tankers can have their fancy sayings (death before dismount) but in actuality, a wargame taught me why all those GIs in Vietnam rode atop their ACAVs during the war.  Survivability.  Should have dismounted and moved with the tracks alongside them during the beginning but I chose as part of the scenario to have them "buttoned up" as it added to the drama of the ambush.  They would have had dramatically fewer casualties had they gone in dismounted.

Anti Tank!  Ensure you have enough anti tank to go around, especially if you're deploying to stop an armored invasion...

2:1 ratio in close assault: Would have been better as the Americans or the NVA to go in with 2:1 local odds as you never know what's going to happen in a close assault when it's fireteam against fireteam.  The NVA had the manpower to do it, but was intent on staying in the ambush teams.

Stick in close!  The US player had an overwhelming advantage in firepower - as the NVA player I should have gone in right after the initial volley and got into hand to hand combat.  Would have guaranteed more casualties from the start.

All in all an awesome game and a great chance to use my nicely painted US troopers, model tracks, and palm trees.  I'll leave you with a few more gratuitous shots of my troopers in action!

Posted by Disgruntled Fusilier at 12:28 PM