Dan Fraser, on his excellent wargaming wiki "Canuck Commander" has posted an re-write of the famous Panzerblitz family of rules for the miniature world.  (found here)

Those of you who enjoy fighting real battles where a unit equals a platoon or a Soviet company will not be disappointed.  SOUND OFFICERS CALL fought a "small" battalion action recently using Mr Fraser's rules and found them to be satisfying and true to the original game. 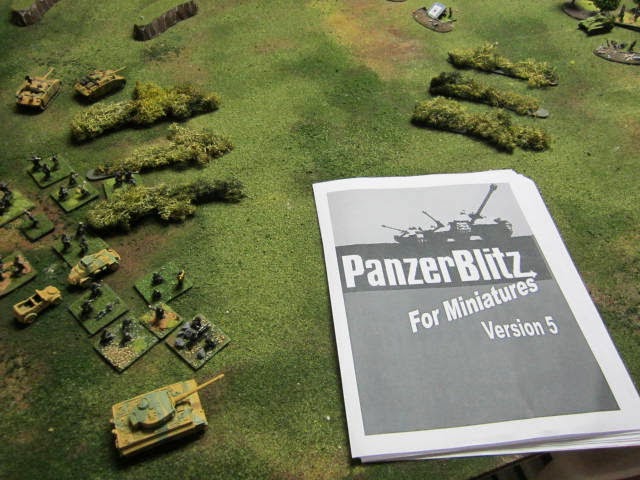 The game pitted a German infantry battalion on foot with 2 Stug-III platoons and a Tiger I platoon, along with 2 batteries of 105mm towed artillery and 2 ME-109 bomb-equipped airstrikes. 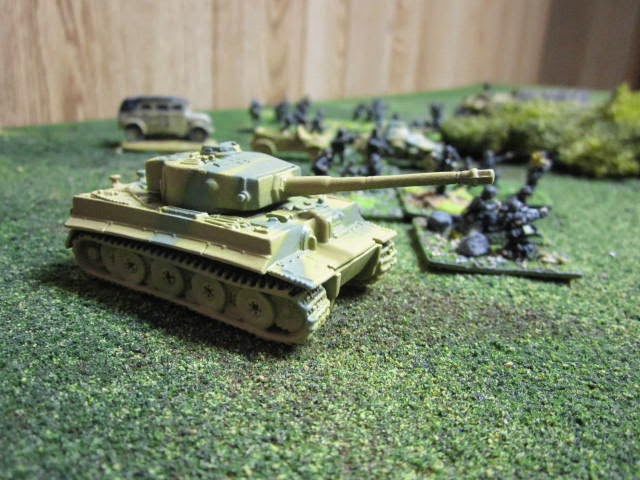 So besides some neat pictures what else do I have for you?  Well some observations really.  If you are a fan of platoon-based stands, and like fighting large battles without alot of hassle, then this game is "probably" for you.  If you want to spend 30 US dollars, you could also buy a copy of GHQ's WWII MicroArmour: The Game as it is based off of many, many, many of the same mechanisms and procedures that Panzerblitz was founded on.   (actually, you can download GHQ's WWII rules for FREE in color now from their website...that's right.  Absolutely free.  With the infantry rules and everything). 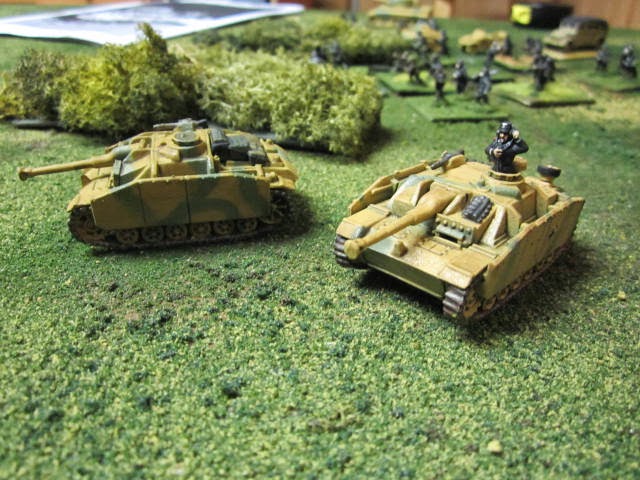 Panzerblitz, and Mr Fraser's re-write use a Combat Results Table although I have to admit, I'm partial to Mr Fraser's combat results table over the original game, where engagements can now lead to morale checks with varying degrees of severity.
Panzerblitz in miniature is clean and the action happens FAST.  With a battle generally decided within an hour or two.  Probably just like playing the boardgame.

Okay so this is probably also an attempt to show off my 15mm Germans...again! 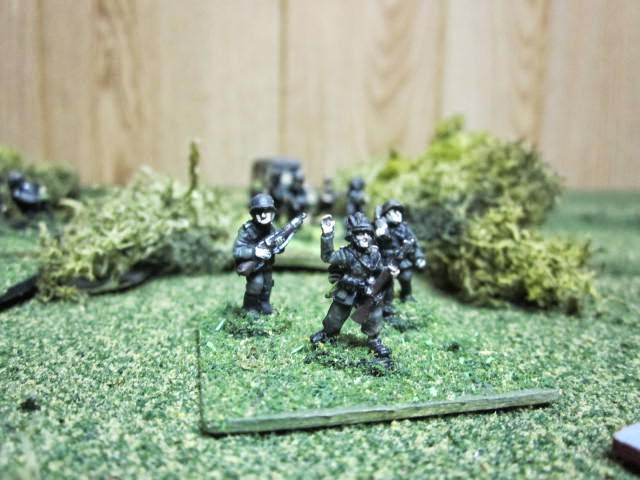 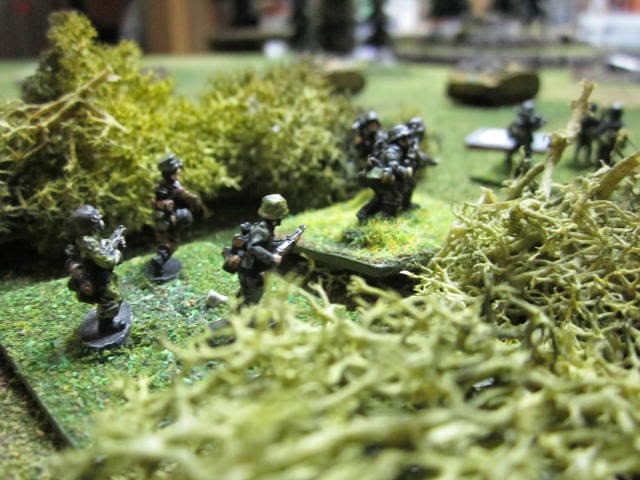 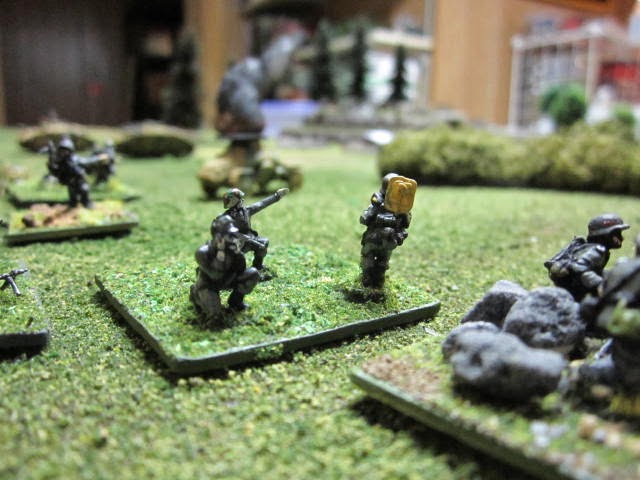 Forgive my incomplete painted models.  I'm doing an overhaul of basically all of my WWII Germans... 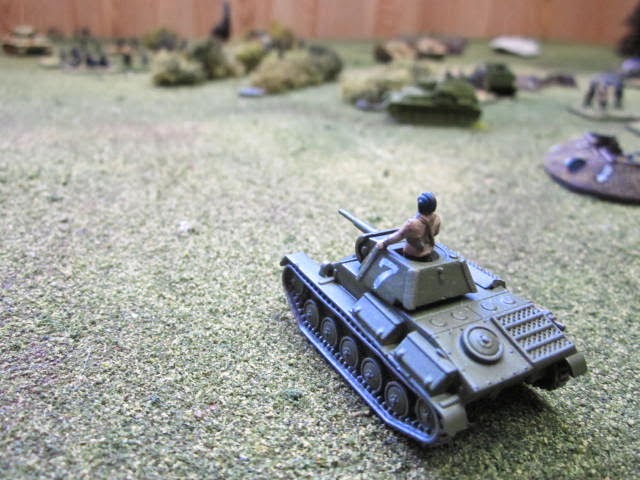 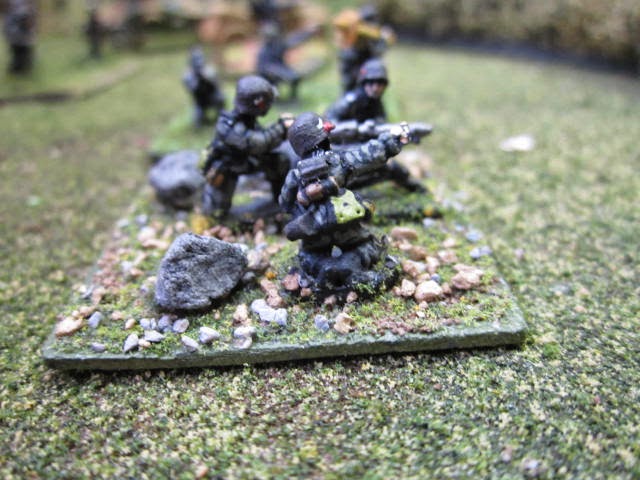 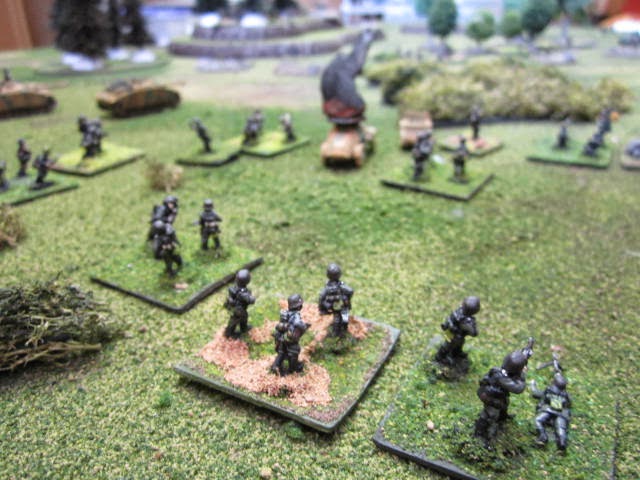 Lessons Learned:  Oh boy is this going to sound familiar to any of you who actually read my blog...

Combined Arms: Just like GHQ - you have to use your artillery and direct fires to achieve a "disruption" result so you can move in and close assault or over-run the enemy while they are disrupted.  Opportunity fire from Panzerleader and Arab-Israeli wars is introduced so use smoke to obscure movement if you have it!

Slow Infantry:  Did you ever notice, just like a paper defending a thesis, Avalon Hill games always seem to have a "theme" the author wants you to subscribe to.  Squad Leader was basically to move in cover and out of sight wherever you go.  Panzerblitz seems to be that infantry are slower than molasses and should be transported, ideally in armored halftracks wherever you go.  I increased their movement to 4" which was still barely nothing compared to the 16" and 18" movement of my tracked vehicles...

Anyways, this is my daughter's birthday weekend everyone so don't expect too much gaming, painting, or war-like transmissions from this net.  Looks like it's all Peppa Pig and Minnie Mouse for the next 48 hours.


Posted by Disgruntled Fusilier at 2:57 PM