Sick day today so I didnt feel like painting, basecoating or building models.  I did, however, play a very small Flames of War game (255 points vrs 265 or 275 points) utilizing a Soviet Infantry (Strelkovy) Company with 2 platoons, a Maxim HMG, and a Kommissar stand against a German infantry platoon with a small 1 section HMG platoon in support.  I played the first scenario from the rulebook entitled "Free For All."

Even if you don't like Flames of War, there is some neat eye-candy in here I promise.  Also, the small forces ensure a nail-biting, harrowing, hold-on-by-your-fingernails defense on the part of the Germans.


The Soviets sent their company right up the middle of the board in true Bolshevik fashion.  The "Quality of Quantity" special rule in full effect!  No pins until 10 hits!!!  The entire width of the company advancing encompassed both objectives...if they could push that far! 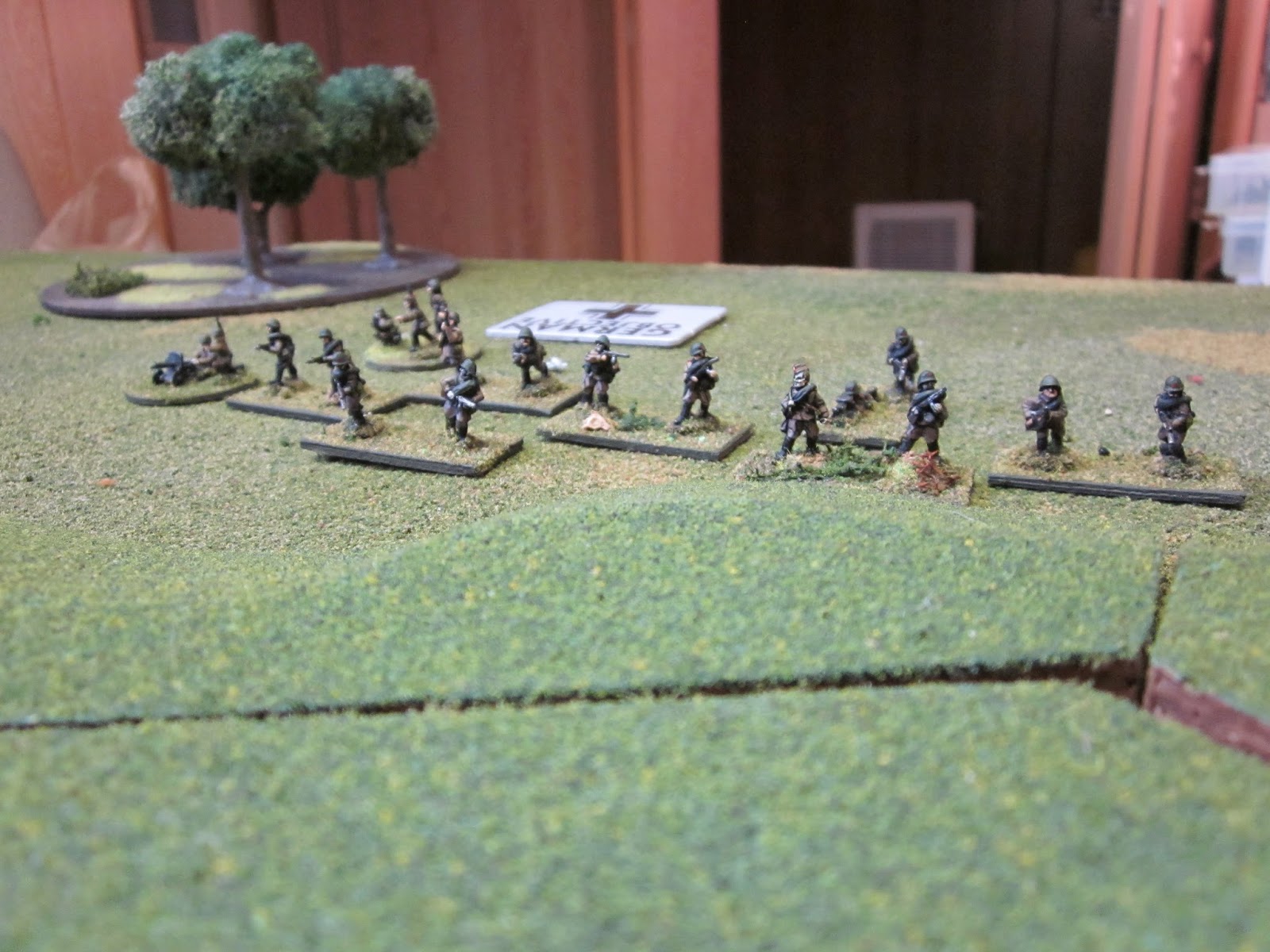 The Soviets move "at the double" since they won the die roll to move first.  This was a big gamble but it paid off as none of the German teams could see them during their first turn.

Both sides trade vicious fire with the Soviets getting bunched up by the terrain during this turn.  Resulting in them only being able to shoot with about half of their teams.  The Germans concealed and veteran ensured no pins.  The return fire was another story entirely.  The Germans choosing not to move shot full ROF for their Rifle/MG teams this round and caused the company to pin.  Under the watchful eye of the Kommisar, they passed their rallying roll with no problem... 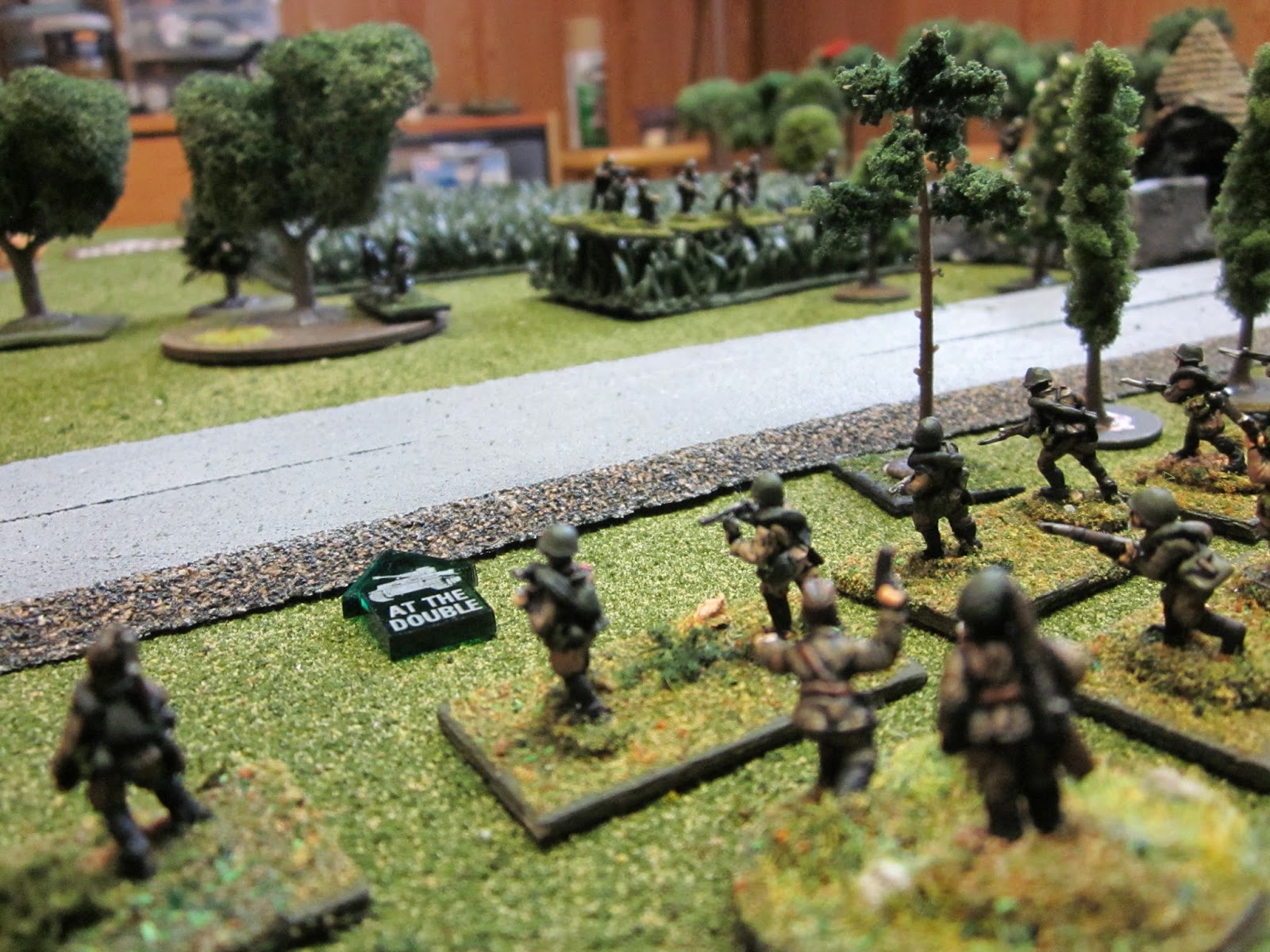 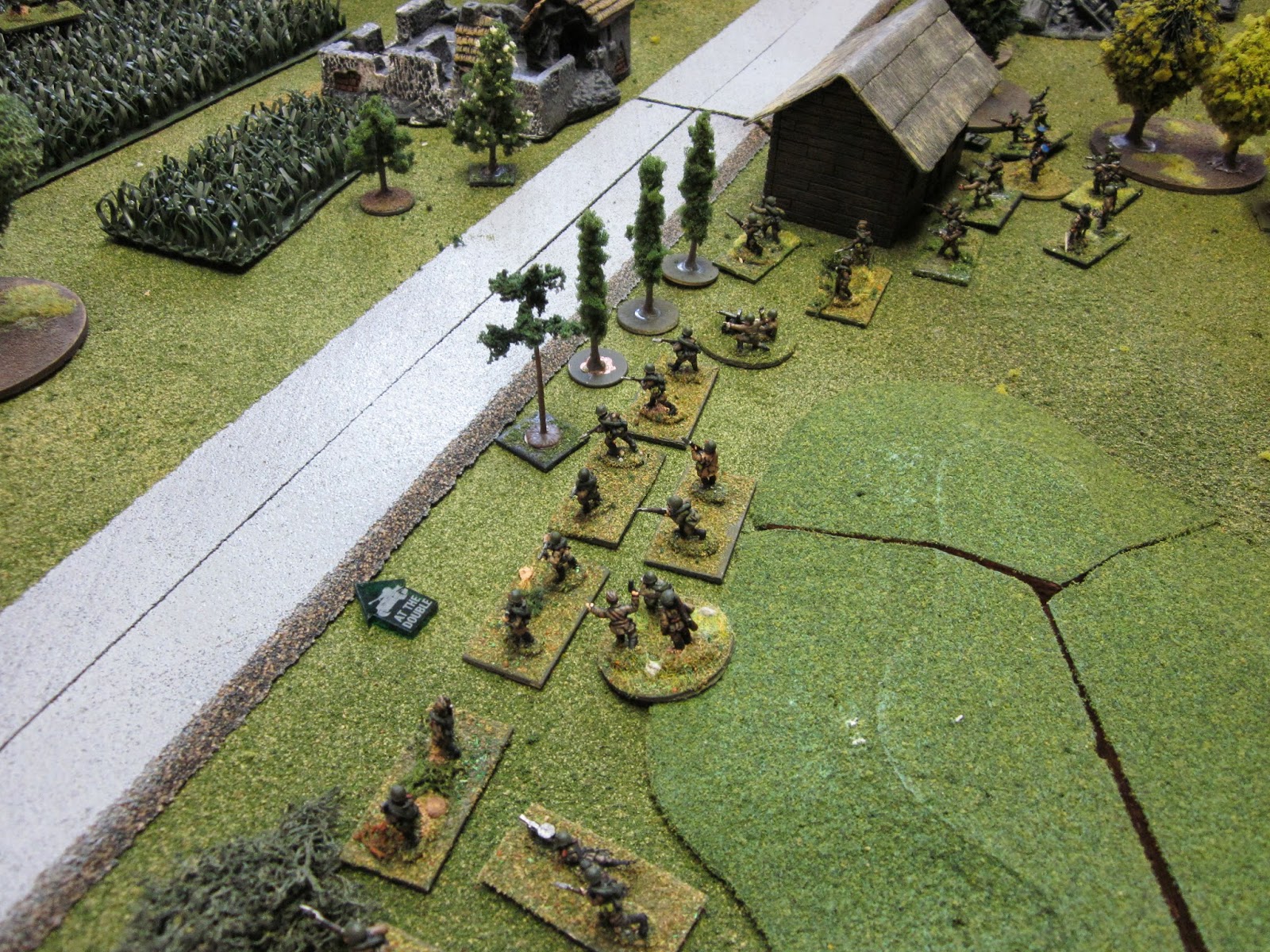 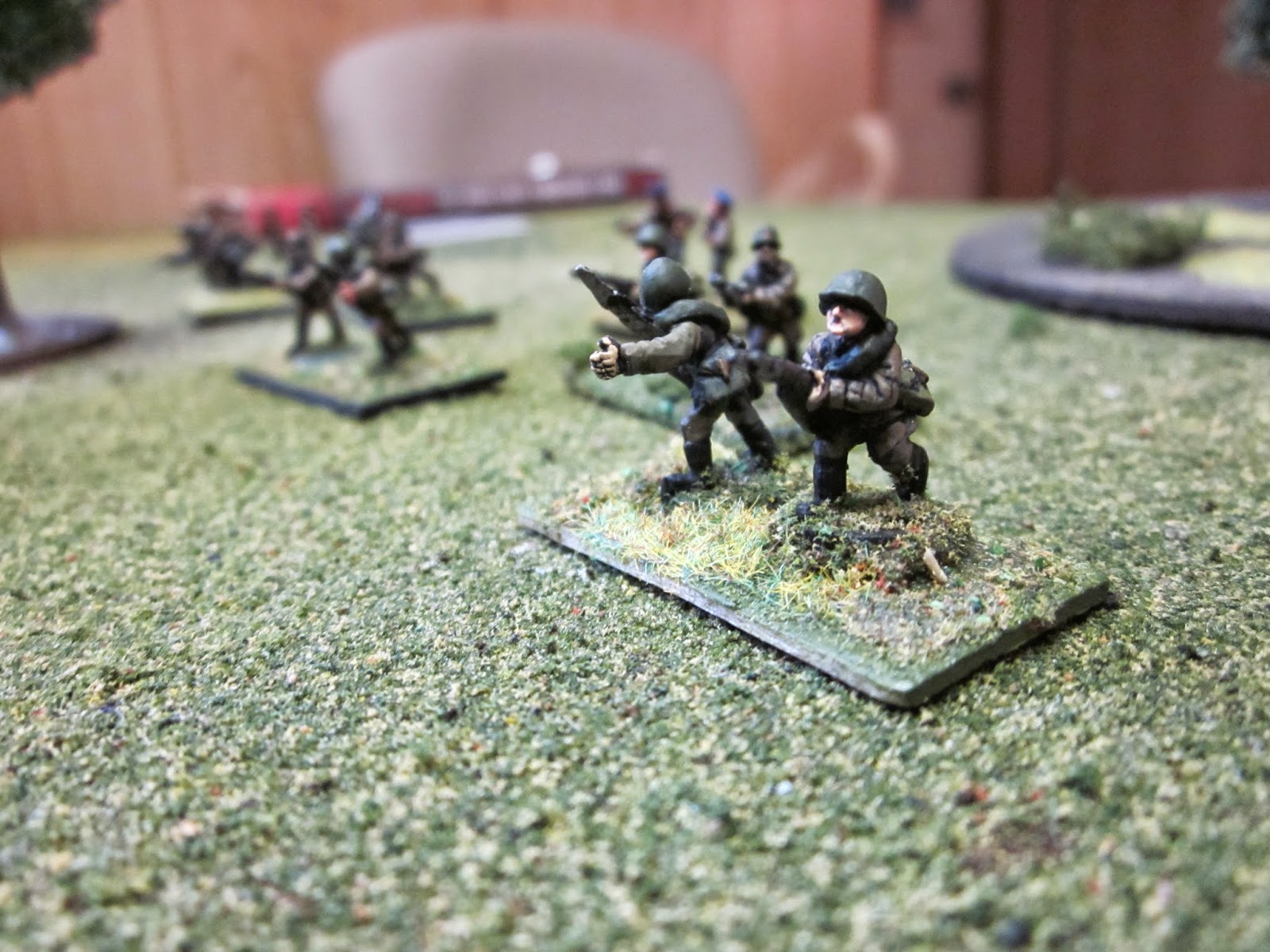 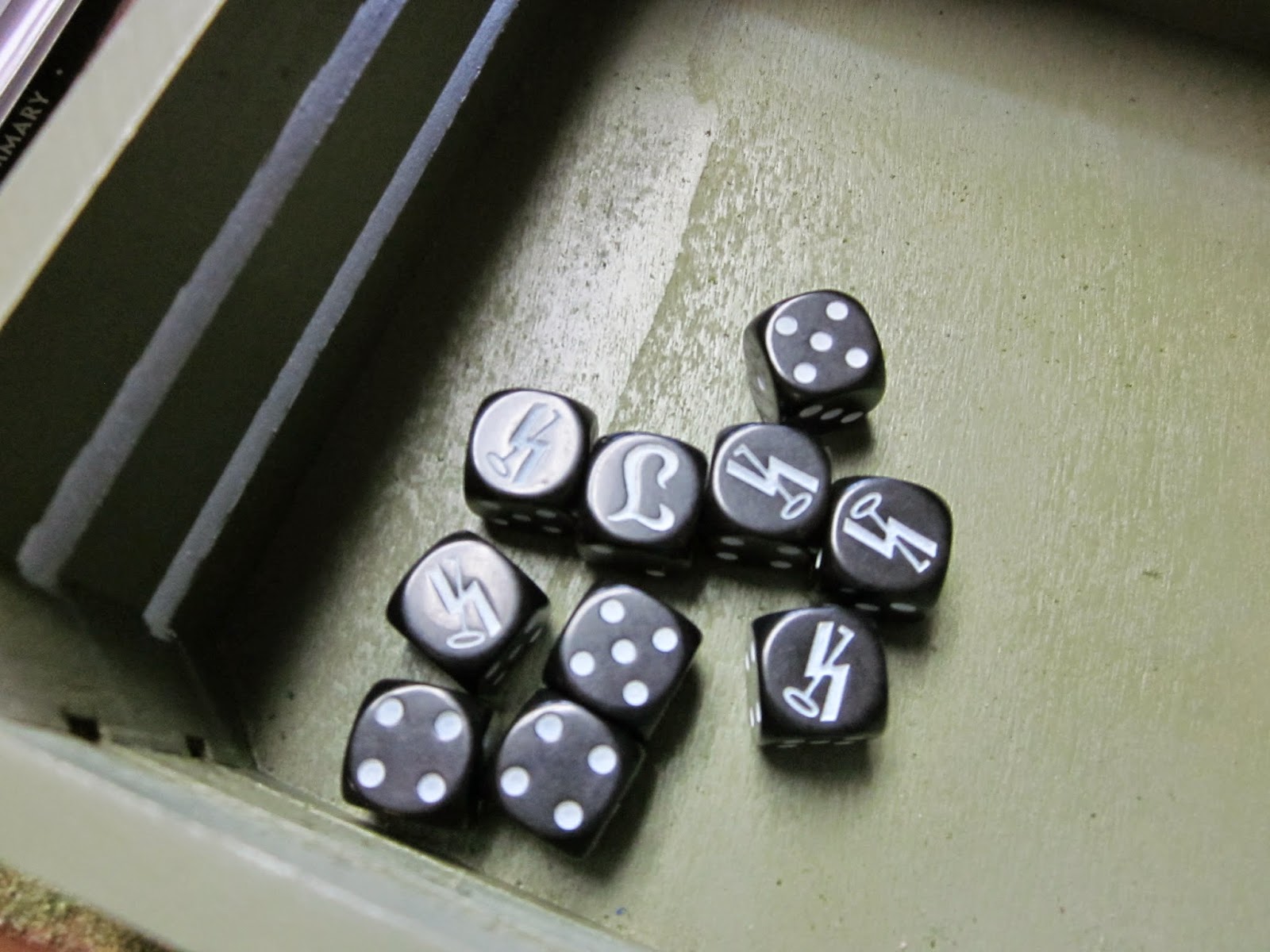 Eventually the tide turned the Soviets' way.  One turn 4, the Germans lost enough teams to force a morale check which they failed.  All that is left is the HMG team and the Company 2IC with them.  They end up taking out 2 more Soviet teams before their command section and teh Company 2IC is KOd. 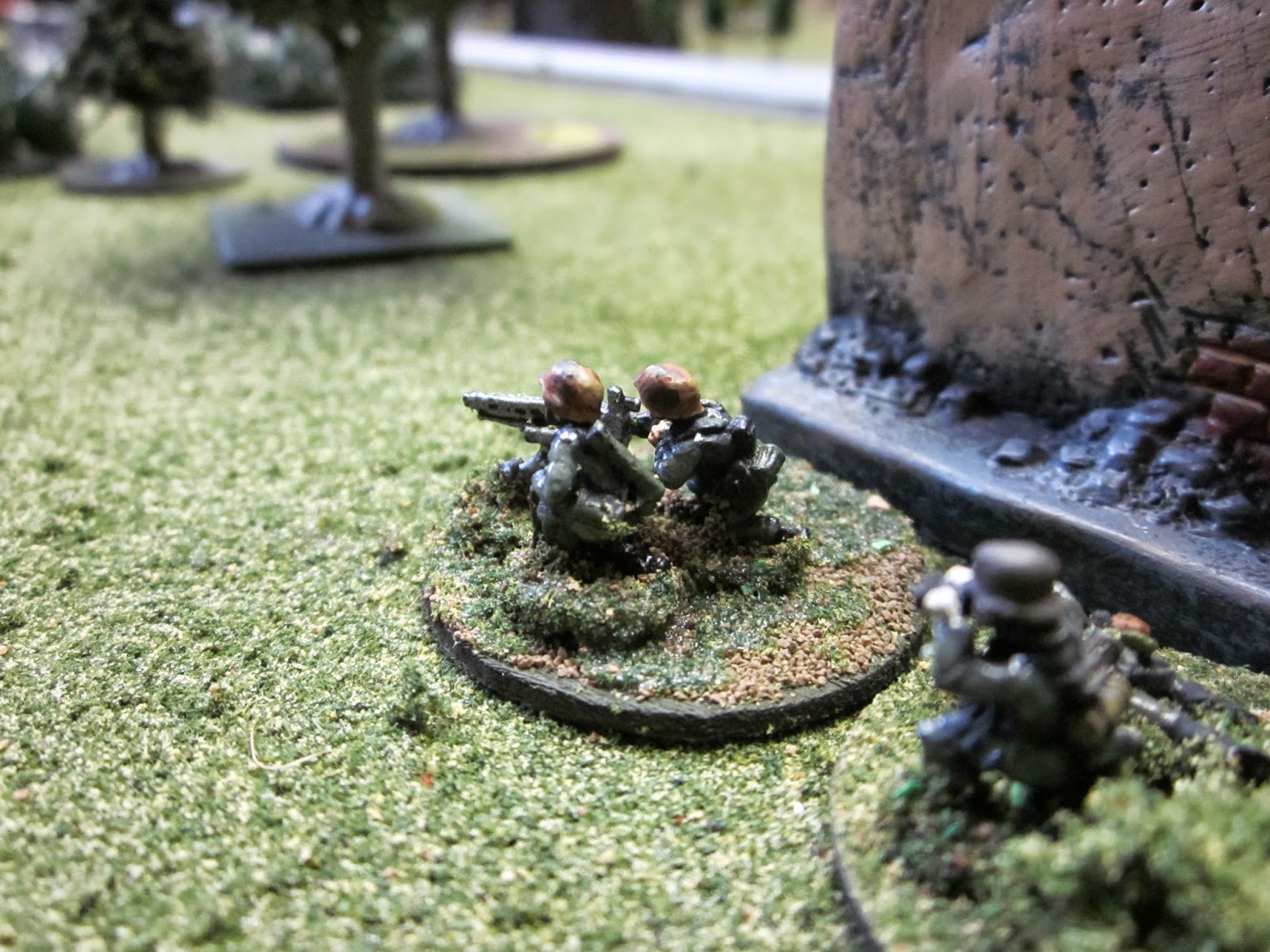 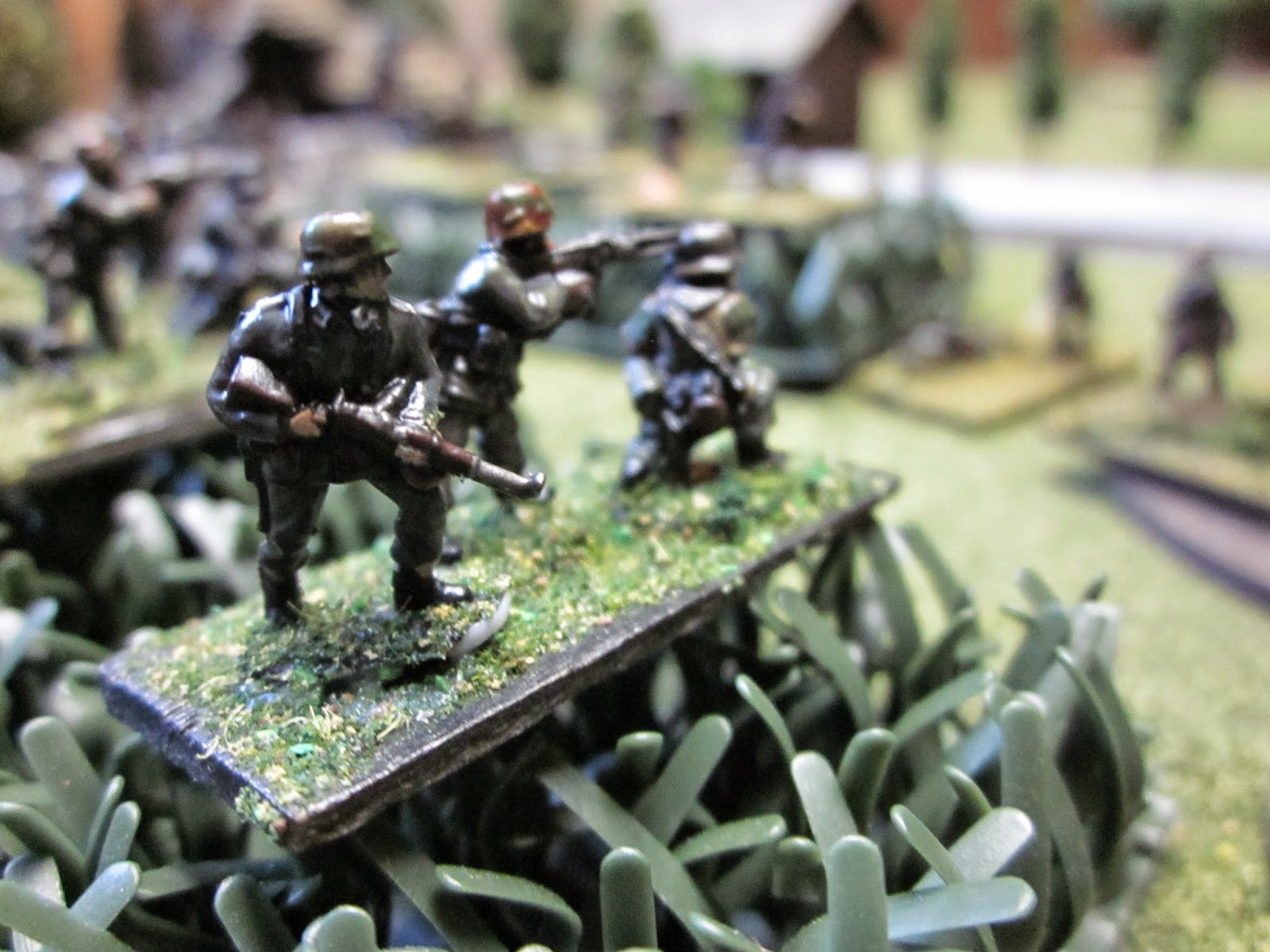 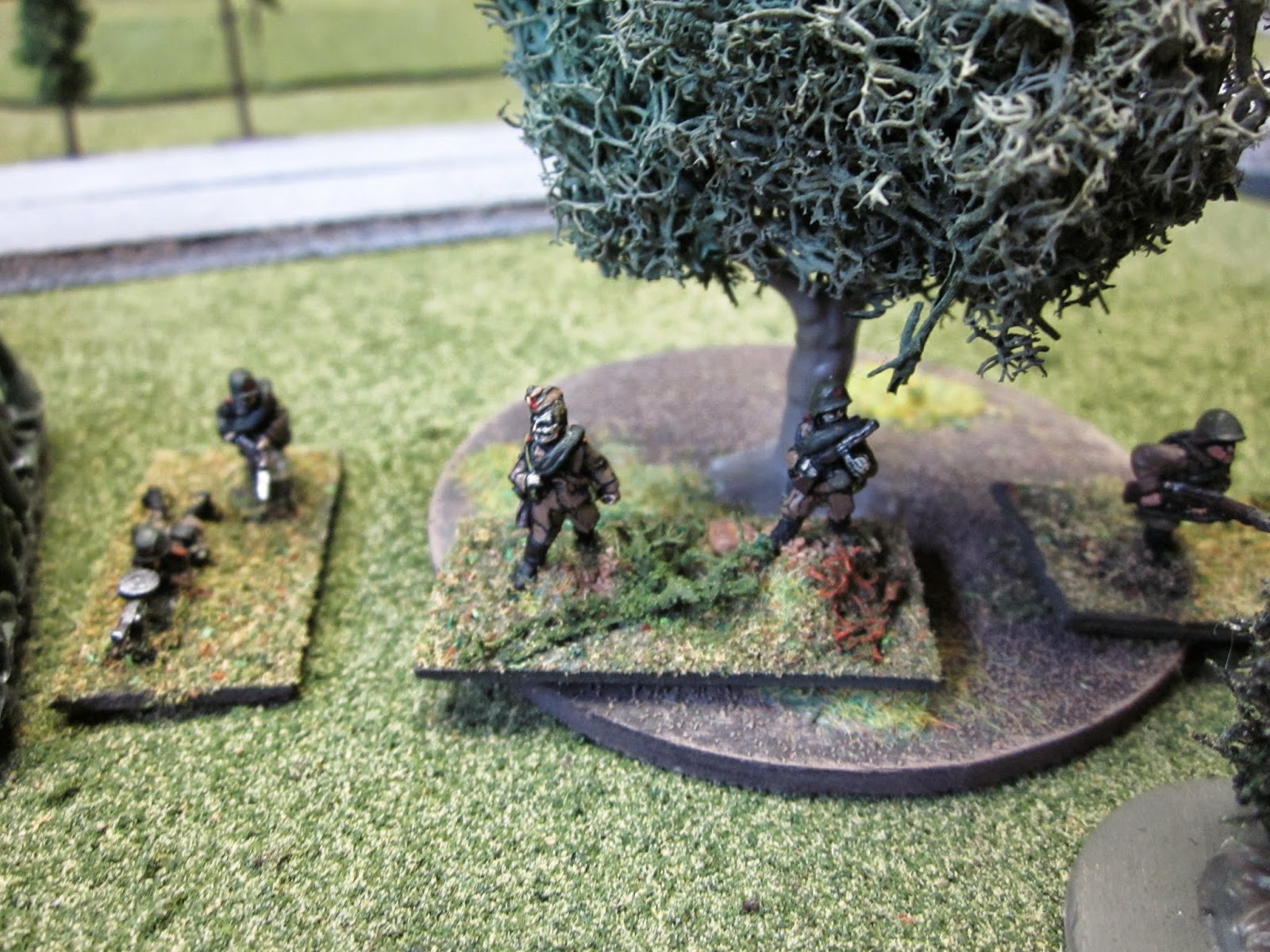 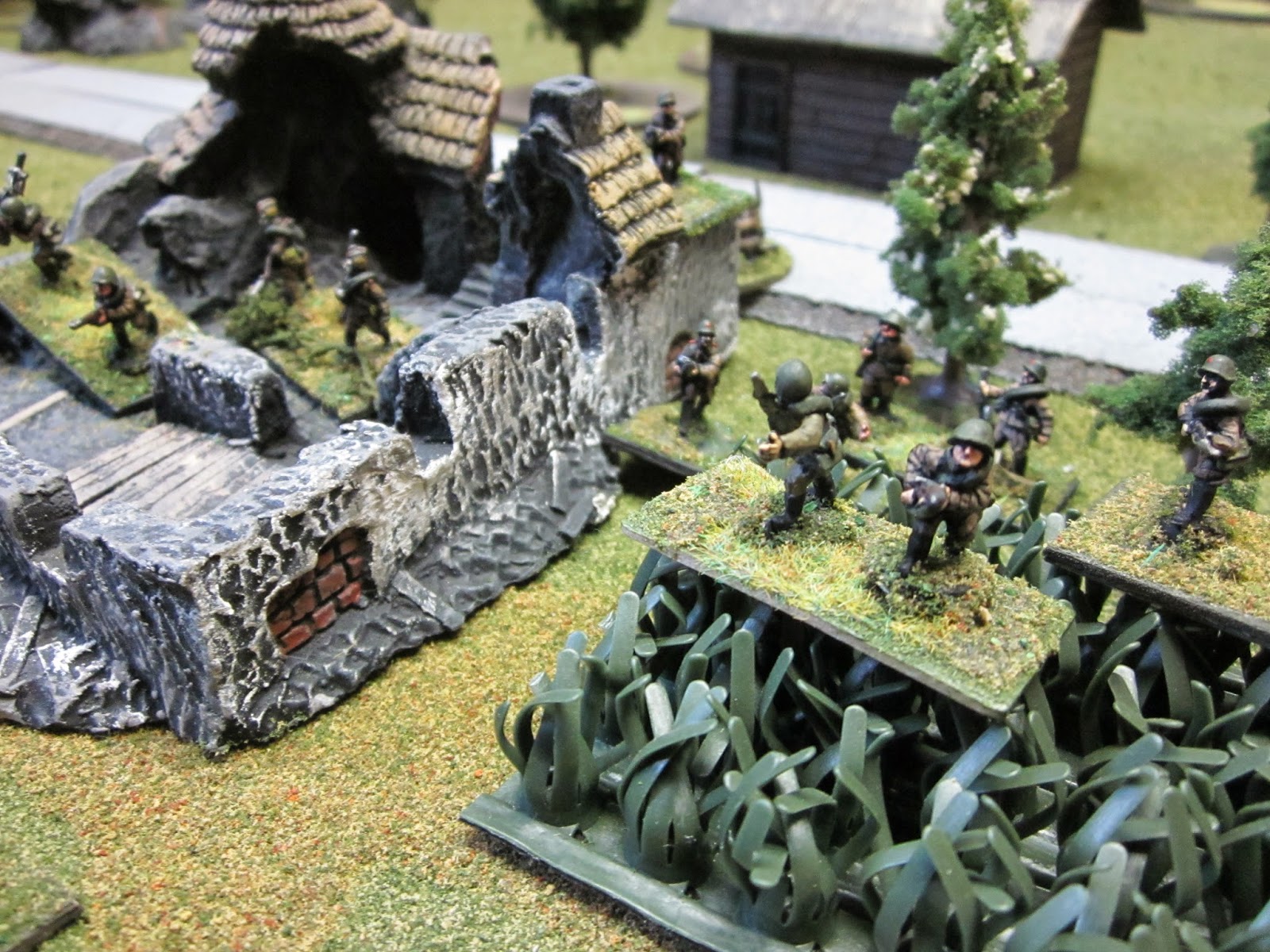 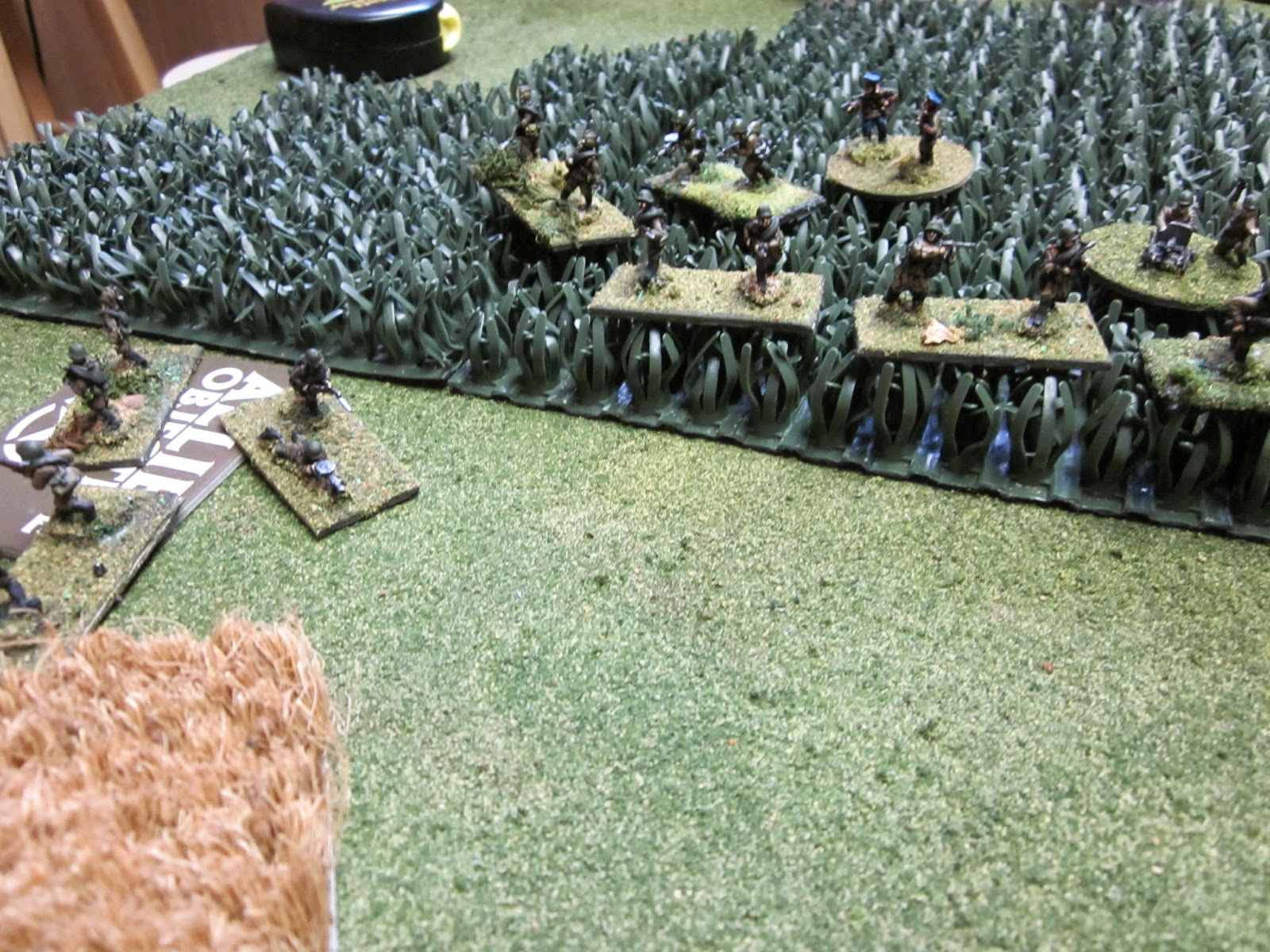 Lessons Learned
Well I always enjoy a good Flames of War game.  I think playing small, 300, 500 and 700 point games is nice as a rules refresher.  Not that I plan on playing any large or tournament games, but it's good to stay current on the rules.  My 1/2 sized stands also enable to me store more and use them in other rules sets with little difficulty.

So where did the Germans go wrong?  Did they go wrong?  For starters, I think they could have co-located the HMG with the platoon.  1 Section out there on its own is asking for trouble.  Speaking of trouble, how would you like serving in an HMG section with more officers and NCOs than Soldiers???  This would have enabled much more firepower at the decisive point on the battlefield.

These guys had the trees blocking their shots for most of the game.

Retrograde.  The Germans attempted to fall back after the successful pinning on Turn 2 and that was a mistake as I believe they could have won the close combat if it happened.  In this game, the Soviets never actually closed to assault.

Fire and Movement:  The Soviets could have used fire lanes more effectively and as a result, a large percentage of units did not get to fire simply because of mis-management during movement.  Every die counts!!!  This is most likely the reason the Germans didn't receive a pin result until the very last turn.

well that's it for gaming tonight.  Going to make a hot cup of tea.  *sniffle*
Posted by Disgruntled Fusilier at 4:21 PM

Email ThisBlogThis!Share to TwitterShare to FacebookShare to Pinterest
Labels: Flames of War