For anyone who is familiar with Charles Grant's "Scenarios for Wargames" I played "Positional Defense 2" from the book (pg 12).  This pitted a Soviet Battalion with an Armor Company in support assaulting a German Company position with a Stug III Long Barrel platoon in support.  The German Kampfgruppe fielded 4 infantry platoons atop a ridgeline in rifle pits and a walled farm complex.  Additionally the Germans had Wespe Artillery and Nebelwerfer support as well.

What a nail biter with a few surprises mixed in just to keep the evening lively. 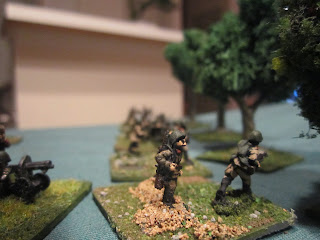 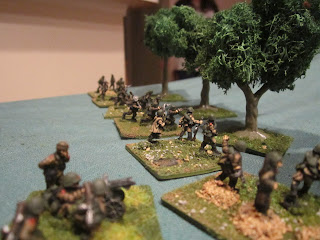 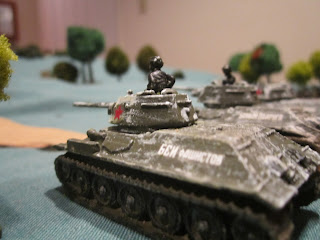 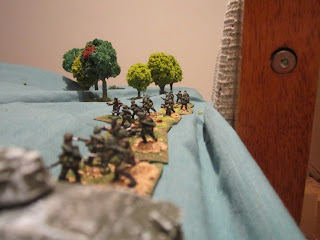 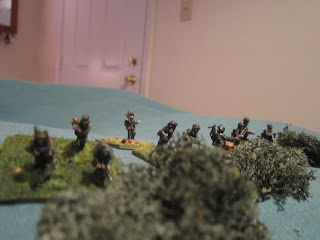 Had some unusual dice problems this evening, resulting in a Soviet command group staying at the line of departure for almost 4 straight turns!  Also could not, for the life of me, get the German command group to issue more than 1 or 2 orders the entire battle.  On the German left however, things were fairly intense with the Germans beating back 4 repeated assaults up the hill and finally charging down hill to flush out the Soviets from the woods at the bottom of the hill.  (a la Chamberlain from Gettysburg).

Eventually on the Soviet left flank the Battalion Command Group got the ball rolling and they stormed the farm complex along with tank support.  The German air never showed up and eventually the numbers won over.  The German Stug was knocked out early on by the T34 Company so it never got to join in the fun.

The Soviets over ran the farm complex and knocked out the last rifle platoon and weapons platoon in the same turn (turn 10 of 12) and the game ended when the Germans reached their breakpoint of 3.

The game was a classic late war, eastern front engagement where the Germans were tasked with holding on against incredible odds.  In this case, Soviet command problems precluded them from launching an all-out coordinated assault.  Instead they threw themselves piecemeal against the German defenders.  This pro-longed the game and although Mr Grant does not include reinforcements in his scenario, I imagine this rear-guard type action would have bought the German command alot of time to pull Soldiers out in other sectors of the front.  Also, the Soviets lost 7 rifle platoons, almost an understrength battalion of troops!

I will let the pictures speak for themselves, then I'll include my lessons learned.  There are alot of pics and eye-candy so bear with me. 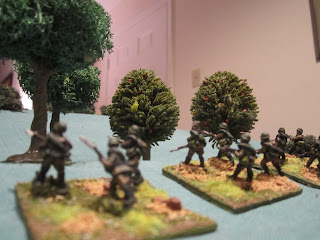 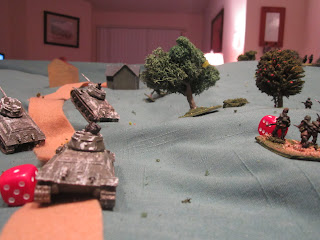 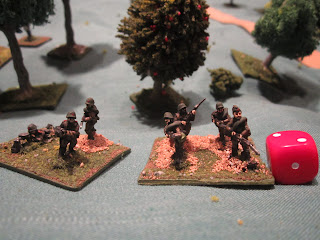 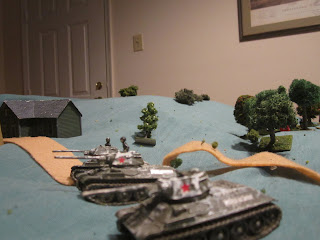 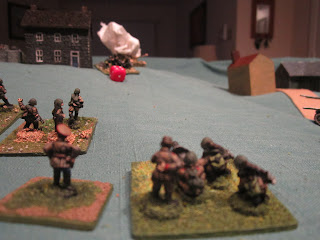 LESSONS LEARNED:
Artillery Support.  Seems like there is always an artillery lesson to be had here.  In this case, the Germans really made excellent use of their artillery breaking up Soviet assaults.  The Artillery softens up the enemy enough that when the rifles open fire (assuming you can pass the command roll) it is much easier to knock out enemy units.

Tank Support / Combined Arms.  Remember, once again just because you can move 30cms doesn't always mean that you should.  The infantry on the Soviet right were forced to handle the bulk of the fighting for almost 8 turns by themselves and could have used some of those terrific 85mm guns operating in support.  In this instance, the tanks were firing at an MG42 stand that could neither see any infantry (Sov left still below the crest of the hill) nor hit anything yet.  Imagine how they could have steam-rolled over Jerry if proper coordination took place.

Protect your assets.  The loss of the German Stug almost guaranteed a defeat early on.  The Stug could have been kept behind the farm house and brought out to make pop up attacks against the Russians.  Instead, the Stug was killed without even knocking out a single Russian tank.

Purchase Support all the time!  Again, I cannot stress enough how awesome it was to have my choice of self propelled 105mm support or rocket fire blanketing the Russian infantry.  In this instance, artillery was the big killer and I can totally understand the old adage : if there isn't enough artillery...quit!  Probably could have used some minefields in support and maybe a Stuka as well.  That might have leveled the playing field.