Fought the remaining turns of a sharp and brutal modern DH game set in a fictional WWIII in Northern Germany.  British conducting an infantry probe against a small town held by Soviet paratroopers.  Ostensibly this small town is part of a larger defensive scheme and the British are sending reserve forces forward to gauge the enemy's strength.

This post covers the remaining 7 turns of the game.  LOTS of pictures!

The game progressed as expected.  Both sides were relatively understrength so there were no sweeping advances to be made without fear of large casualties.  The British cautiously advanced while the Soviets put up a stiff resistance.


The British made slow advances and were turned back by Sov Airborne squads at each point, but with great cost to the Soviets.  The GPMG really took its toll on the Soviet teams. 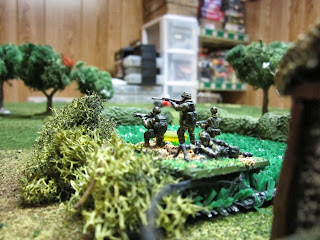 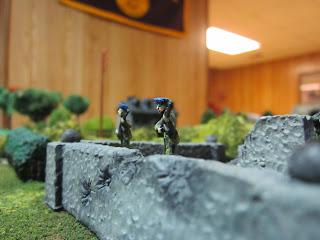 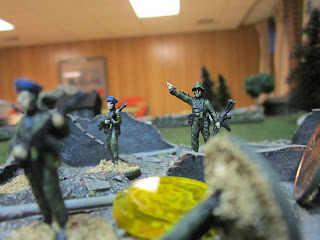 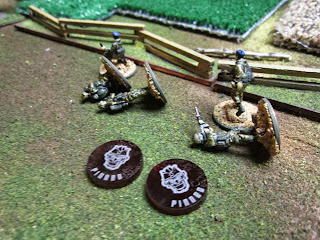 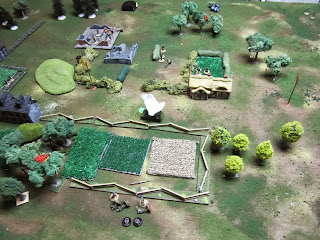 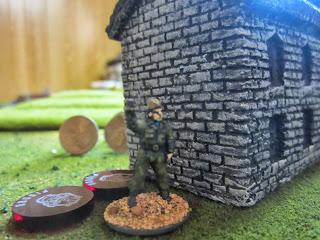 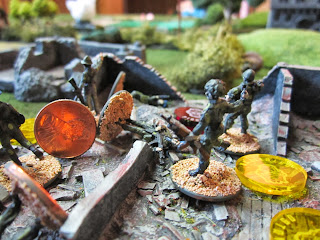 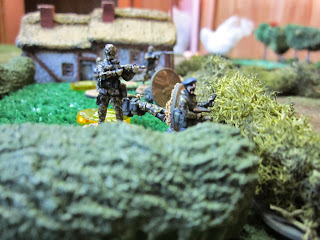 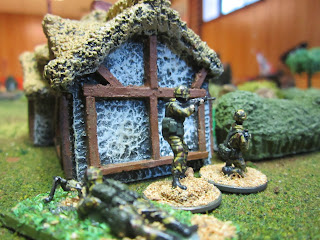 LESSONS LEARNED
Well by this time you're anxious to be done with this blog post!  So I'll cut to the chase.

Support by Fire: Remember to have mutually supporting fireteams.  When one moves, the other one can cover it.  In this instance, teams from the squad on the left were not able to cover their moving teams, leaving those guys out in the cold without any lead to cover their advance.  Not a good thing...

Stay in Command Radius:  This is much harder on the defensive when you're covering more positions.  The Soviet squads were moving out of command radius making it too expensive to activate each team each turn.  This left a team stranded on an open road and they were constantly getting chewed up by GPMG fire until it was too late.  The only one routing into cover was the squad leader.

All in all a great time.  The "big" war between NATO and the USSR never happened obviously, but it makes for great gaming material.  This game was a great time and a good opportunity to fine tune my Seek Out, Close With, and Destroy rules supplement.  I could have played with jamming and artillery but that's not fun in a small battle.  Next I'd like to play a huge World War II battle with my Northeastern Europe forces, armor and maybe even airpower.  Also have my Vietnam forces to play with and can include airpower and helos.  Cant wait.
Posted by Disgruntled Fusilier at 6:24 PM