Finished a US Rifle Squad for Crossfire recently.  I wanted to post the results!  Troops are Battlefront and Old Glory.  Painting up Allied WWII Troops is usually a fairly quiet and lucrative affair as there is a universal assortment of colors.  Much quicker than my Germans!  Just not as quick as my Russians.  I wonder if that says something about national philosophy?

Anyways, I am painting these units up for Crossfire however they will work for almost any WWII game I currently have rules for to include Blitzkrieg Commander, Command Decision, Spearhead, and GHQ's WWII MicroArmour The Game.  Luckily I have a ton of troops both painted and unpainted so logistics is not a problem!

One thing I'd like to do is play the same scenario with all of the different rules systems I have and see which ones play out differently, then post the analysis on this blog.  I will play the Scenario highlighted on the Blitzkrieg Commander "download"s section entitled "If you go down to the woods today" however I'll name it after one of my FAVORITE Squad Leader scenarios entitled "GERMANS IN THE WOODS"

The Scenario is infantry heavy and simulates a German infantry assault with armor support to seize a village that serves, operationally anyways, as the shoulder of a thrust during the Battle of the Bulge.  The Americans have 9 Infantry Stands (platoons) and the Germans field a total of 11.  The Americans have a handful of tank destroyer platoons available as do the Germans.  Should be a good time as the scenario is fairly balanced giving either side a chance for victory and is heavily dependent upon the arrival of reinforcements.  This game would be suitable for literally any time period as well from horse and musket up to ultra modern and sci fi.

The cool thing is, I'm going to paint up some of my units in snow camo (ie white painted helmets and sheets).  that will make for a fun time, I think. 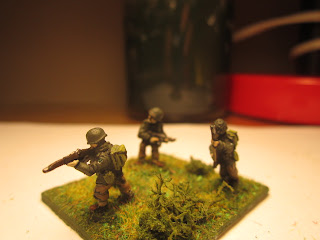 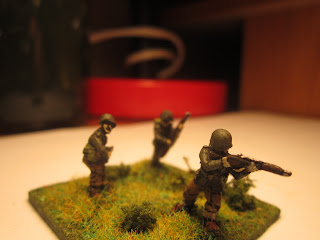 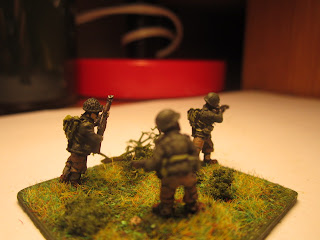 Posted by Disgruntled Fusilier at 3:55 PM