Recently fired up my external hard-drive and found this gem - a Cold War Commander battle featuring some of my GHQ micro armor that is currently in storage.

Scenario had 2 Syrian Tank Battalions (T62) and a mechanized infantry battalion (BMP-1) squaring off against an Israeli Armored Company Team and a Mechanized Infantry Company Team in Shot Centurions and M113s.  In the way of support, the Israelis fielded 2 sorties of A4 skyhawks and a Battery of Self Propelled 155mm Artillery.  The Syrians had 1 Battalion of 122mm Artillery and no air cover.

Right from the start, the Syrians rolled a command blunder and a T62 Battalion foundered at the line of departure without moving.  Their objective was a small ridgeline and outpost on the opposite side of the table. 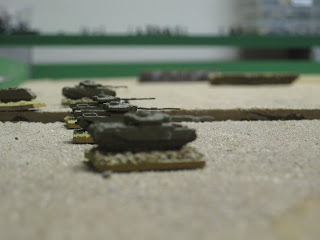 Syrian Artillery was able to claim some casualties in the initial pre-registered bombardment but no armor had yet been knocked out.  From the directions the Syrians would come, they would have to cross a kill-sac of Israeli Armor, artillery, and infantry ATGM fire.

Israeli gunnery was superb, knocking out at least 1 to 2 platoons of Armor per turn.  The A4 sorties didn't hurt either and attrited the advancing Syrians as well, only losing 1 shot down to accurate 57mm AA fire.


The original Syrian plan had been to launch an all-out assault on the ridgeline where the Israeli infantry was located.  The assault would occur with 2 Battalions abreast, 1 Infantry Battalion and 1 Armor Battalion.  In the end however, the turning movement of the Battalions from their start-point (which was diced for) proved disastrous and also disrupted the Syrian plan.  Instead of offering his flanks to the Israeli Armor, the Syrian Commander turned towards the Israeli Armor, with his BMPs moving in to attempt to dismount on the ridge and close assault the Armored defensive positions.


The battle turned into a knife fight with the Israelis not losing a single Armored platoon in the Armor Company position, and losing only 1 Centurion platoon at the Infantry position.  I apologize there isn't better detail, however it was quite awhile ago!

In hindsight, the Syrians were doomed from the start given their jumping off point.  A flanking move against the Armored company would have been the preferred method with 1 Battalion shielding the other from the Israeli gunners and moving to flank the ridgeline, then clear it for good by flanking the Infantry.


LESSONS LEARNED:
Use the terrain!  As obvious as this sounds, remember the old adage "if you can be seen, you can be hit.  if you can be hit, you can be killed" this is as old as warfare itself and holds true in modern times.  The modern battlefield is a very nasty place.  Small ridge-lines and outcroppings that can shield armor should be utilized at all costs.  Imagine if a tank battalion would have emerged on the flank of the tank company.  Some intelligence maneuvering would have ensured the Syrians lasted a little longer than they did.  It was an arrogant advance and they paid for it in blood!

Dismount infantry at the right time.  The Syrian infantry died in their carriers.  To quote Patton "what a waste of damned fine infantry".  They could have been postured for a close assault with their armoured support, lending 2 times as many targets to kill.  It would ahve overwhelmed the Israelis and is a sore spot to this day with me!

Purchase AAA.  I can't stress it enough and it's worth the points.  The Syrian self propelled 57s were perfect and did their jobs well, knocking out 1 A4 on a gun-run.  Points well spent.

Give them the tools!  Ensure your infantry or infantry teams have appropriate anti-armor capabilities.  I like cross-leveling a tank platoon or 2 with my infantry and I always equip them with some sort of upgrades!  Never a bad call.

Reserves.  Once again this topic creeps its way into my AARs.  Always plan for having reserves.  I could argue the Syrian infantry was in a reserve role but that wasn't part of the plan.  THey advanced behind the Armor more out of self-preservation than out of good planning.  The Israelis gambled alot on what they had on the line.  Imagine if the Syrian armor attack on their flank had materialized.  Their 4 or 5 Shots would have been used up very quickly in overrun attacks.

As always, CWC is a joy to play and the results are satisfying.  While this battle was historically accurate (even for a fictional scenario), the results were in doubt for awhile and made for excellent gaming.  I like CWC's command blunders.  After serving myself, I can tell you there are thousands of issues (Clausewitz called it "friction") that creep into missions and cannot be planned for and can hold up military movement. Additionally, the way CWC handles supporting arms is elegant in my opinion.  PLayers are more apt to use all of the tools at their disposal than with other games and CWC pays off for using good tactics.

My inspiration for this scenario was "The Heights of Courage" by Avigdor Kahalani in which he describes a desperate action against relentless odds.  One of my favorite books!
Posted by Disgruntled Fusilier at 2:48 PM