Played a modest sized Volley & Bayonet battle today - Prussians vrs Austrians with multiple objectives set across the board and have some observations to share.  This game was an Austrian Victory and not by any slim margin either.  To be fair, the Austrians grossly outnumbered the Prussians, however that has never concerned the Prussians much in the past! 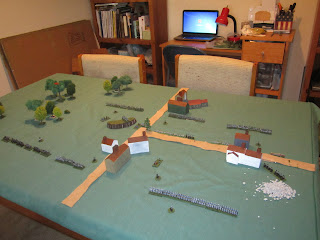 As the picture attests to, the contest was uneven, pitting 2 Prussian infantry wings and a huge division of cavalry against 3 Austrian ones.  The Austrians had the benefit of setting up second and were able to deploy their troops with an advantage by making their wings strong but also flexible, with each one making good use of supporting cavalry and artillery. Unfortunately the Prussians only fielded one battery.  The map shows the view from the Prussian side.  The villages are each 1 point and the hill in the middle of the map is 1 point.

The Prussian cavalry swept aside the Austrian battery with ease and formed to attack the Austrian left.  While mostly successful, the infantry proved more stubborn than expected and only partially gave ground.   Although the Prussian attack ended with the hill in possession, there was a very strong infantry wing forming to the Prussian front to re-take the hill.  The Prussians didn't have the infantry to hold the hill and the modest 2 Regiments of fusiliers proved to be inadequate to hold onto it for long.


Every time I play Volley and Bayonet I learn something I hadn't previously thought of in terms of operational planning.  This game reinforces an old point I made in a previous Napoleonic battle:  Task Organization means everything.  While it might have been a little unrealistic to group Austrian formations into combined-arms divisions, I did it to reflect the Austrian's luck in setting up second, countering the Prussians.  While they looked splendid in their long lines, arrayed for battle, the Prussian wing was ill-used which brings me to my first conclusion:

In Volley & Bayonet, if you have fresh troops you should always risk the attack.  The worst thing that can happen is a loss and recoil.  Although it might upset your plans, if you have the ability to do so, you should always attack.  What shame that the Prussians allowed 2 powerful wings to deploy almost in front of them and then pick them apart.  Given the option again, the Prussian force would have obliqued for the center of the map to protect the small but vital breakthrough initially scored on the hill.  The presence of a large infantry force in the Austrian center would have made the Austrians think twice about continuing their own plan.

Artillery is a supporting arm.  Every time I play Volley & Bayonet I mention something about the artillery.  I wonder what that says about my ability to employ it!  As much as it pains me being a former Redleg officer myself, in horse and musket battles, Artillery is a supporting arm.  While it produces many casualties and is vital, it needs to be protected.  A favorite strategy this time was throwing cavalry units against batteries all over the battlefield to eliminate the Artillery.  I should have kept them back farther with the infantry. noted!

Cavalry opens up the flanks of the battlefield.  With the addition of large amounts of cavalry on the battlefield, suddenly the entire tabletop is fair game.  Always use the mobility of your cavalry in Volley & Bayonet.  Assign them to their own division commander so they have the autonomy to circle around to the enemy's rear and engage him.  The presence of 3 cavalry regiments in the Prussian rear caused a full-fledged halt to the assault against the Austrian infantry and, frankly, caused a re-think of the whole battle.  Your cavalry can guard your flank while your infantry moves forward.  I didn't particularly like using my cavalry as shock troops.  While it was fun, it was poor use of combat power. Once they recoiled and the dust settled ,I realized...THE AUSTRIANS WERE STILL THERE I thought to myself "I had better bring up some infantry too..."  With their mobility, they are much better suited to the deep fight.

Keep Reserve Troops handy!  This is probably the most stark lesson learned in this fight.  Neither side made use of reserves and that was a terrible tragedy.  I can think of instances where reserve forces could have been introduced to fill vital gaps in the line and bolster the combat power of my formations.  Next time I play a SYW or Nappy game, I'm going to keep my elite troops in a reserve role.  Not only will they be fresh, but will have a morale of 6

So to recap - Dont just let combat power sit around - use it as you can't win on the defense.  Task organize your divisions for success and give them a cavalry unit and an artillery battery if you have the troops for it.  Use reserves also - include reserve forces in each and every plan.

I'm not sure what more I can say about Volley & Bayonet that hasn't been said already.  I love the system.  Most of the time, I'm not sitting around thinking "man this is hokey" instead I'm planning an advance and then fighting that plan.  It's suitable for literally any military scenario you can think of from the period, and I think it has applicability to periods prior to 1700 as well.  It rewards solid planning and really gives you the feel that you're the army commander on the tabletop.
Posted by Disgruntled Fusilier at 11:59 AM