I couldn't wait to test out Rapid Fire in a modern battle so I grabbed the West German and Russian Roskopf models I received last month and put them to work alongside the Command Decision and Khurasan guys I already had painted up.  For this game I used the supplement I've linked to in other posts but I would like to start using other modern RF supplements and probably tinker with my own.

The Scenario is a breakthrough situation pitting a Soviet tank battalion (T-62) and a mech infantry battalion (BTR-60) against a West German Bundeswehr mixed battalion of 2 infantry companies in Marders and 2 panzer companies (Leopard IA4).  The Germans could also call on a Jagdpanzer AT independent company with Jaguar and HOT-I ATGM missiles, as well as a 2 155mm SP howitzer batteries.  The Soviets had pre-registered artillery fire in the form of a 122mm SP Battalion of 3 batteries which did absolutely nothing.

The Soviet objective is to exit 1 battalion off the table.  The German objective was to stop them.  Since I only have a 6 x 4 table, I played the game in centimeters instead of inches.

While getting off to a slow start, the action heated up rather quickly, and the pictures start at the point where the Soviets are about to close assault the orchard complex with the infantry battalion.  Soviet strategy was to locate and pin the Germans in place and bypass with the armor battalion.  In theory sounds like a good idea.  In practice - not so simple...

The Soviets initially had a hard time spotting the dug-in Germans until the Marder's opened up with their ATGMs, knocking out some BTRs from the mech battalion.  The Soviets deployed to assault the orchard where the Germans were dug in.

So far, I am getting the hang of and enjoying Rapid Fire.  It's very much a thinking-man's wargame and allows you the kind of maneuvers on the battlefield that other rules sets would punish you for.  Retrograde moves are possible, as is covering fire.  The only limitations are that, given the scale I believe, infantry units cannot close assault armor and armor cannot over run infantry.  At first I didn't like this rule but am getting the hang of it.  These days, armor doesn't go careening in the midst of hostile infantry anyways.


Soviet forces approached the orchard and start taking artillery fire and auto-cannon fire from the Marders. 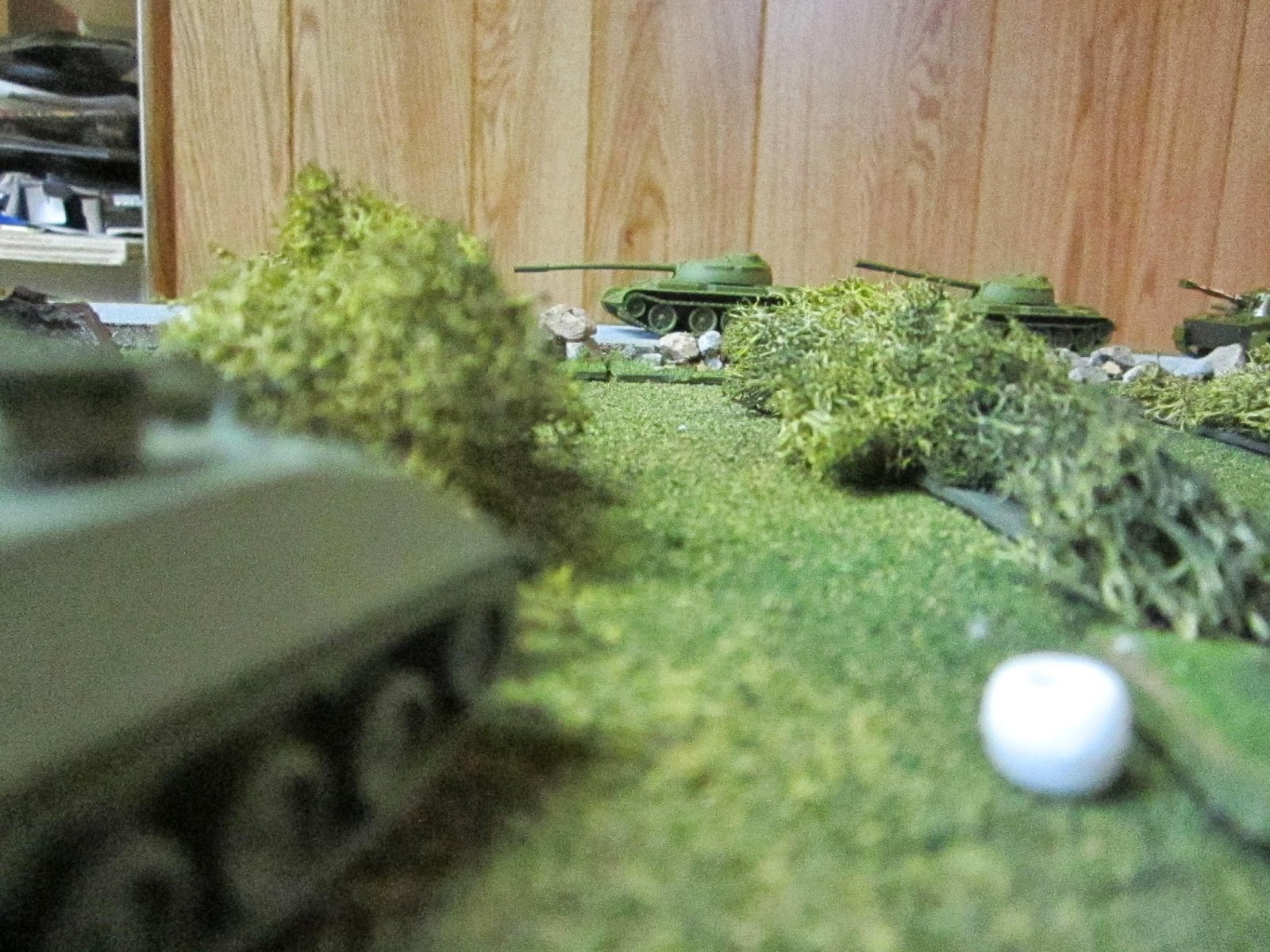 The Soviets capture most of the orchard and destroy the German infantry company in the process.  There is another infantry company on the perimeter of the Orchard in ambush positions.  The Soviets subsequently stall out.  An RPG gunner gets a clear opportunity to knock out the Jaguar in cover and fails his "heroic action" test!!! drat! 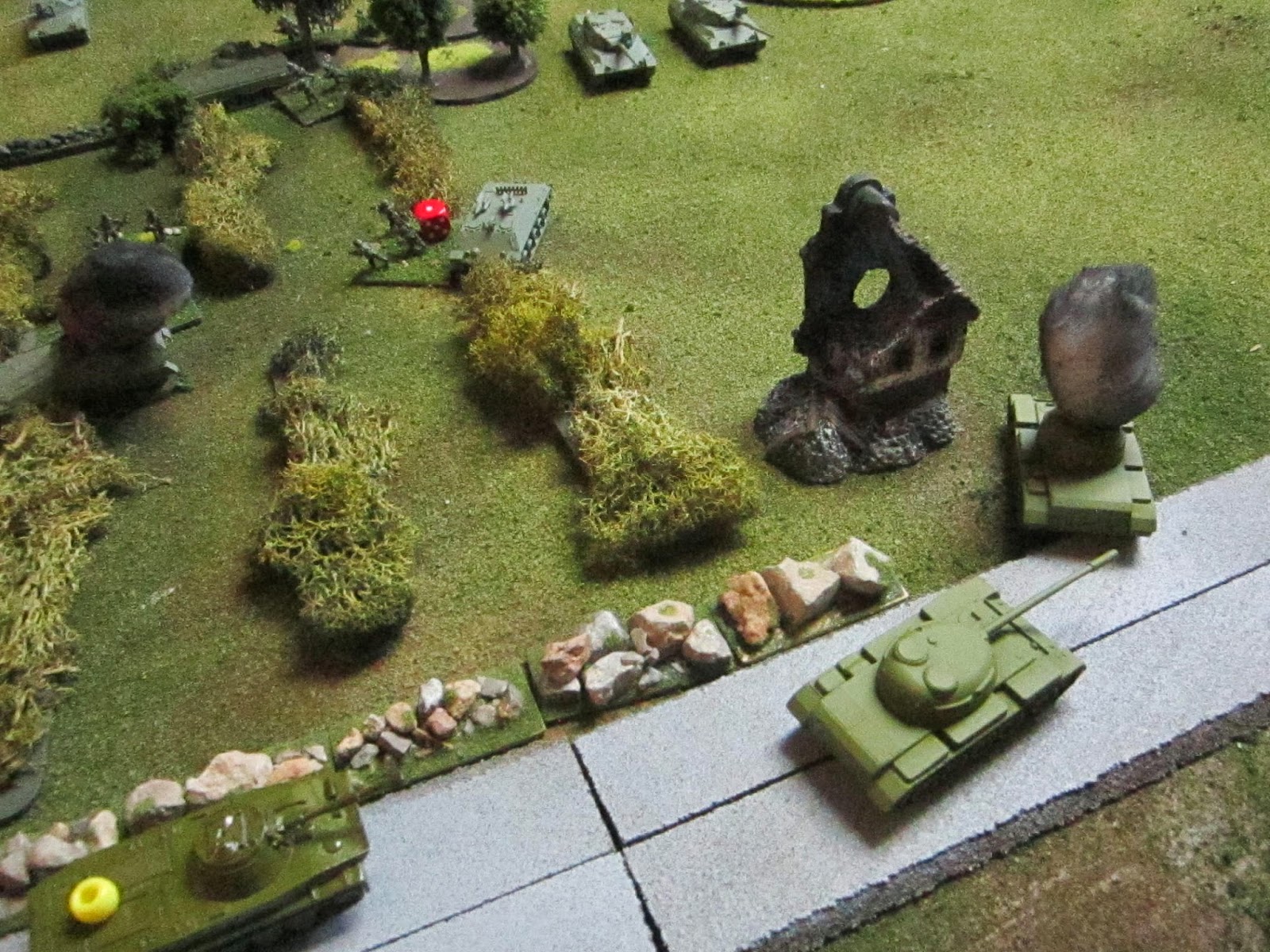 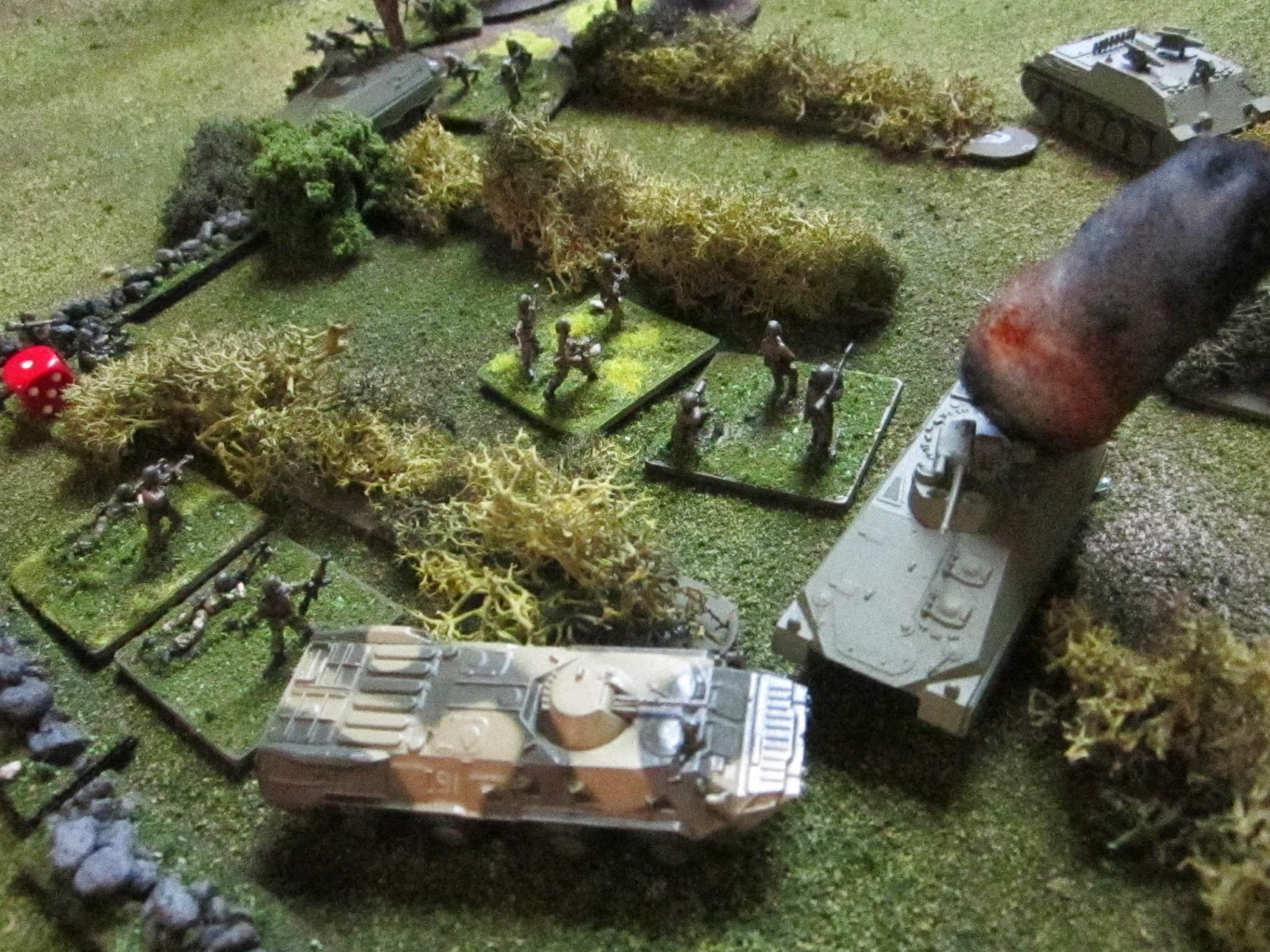 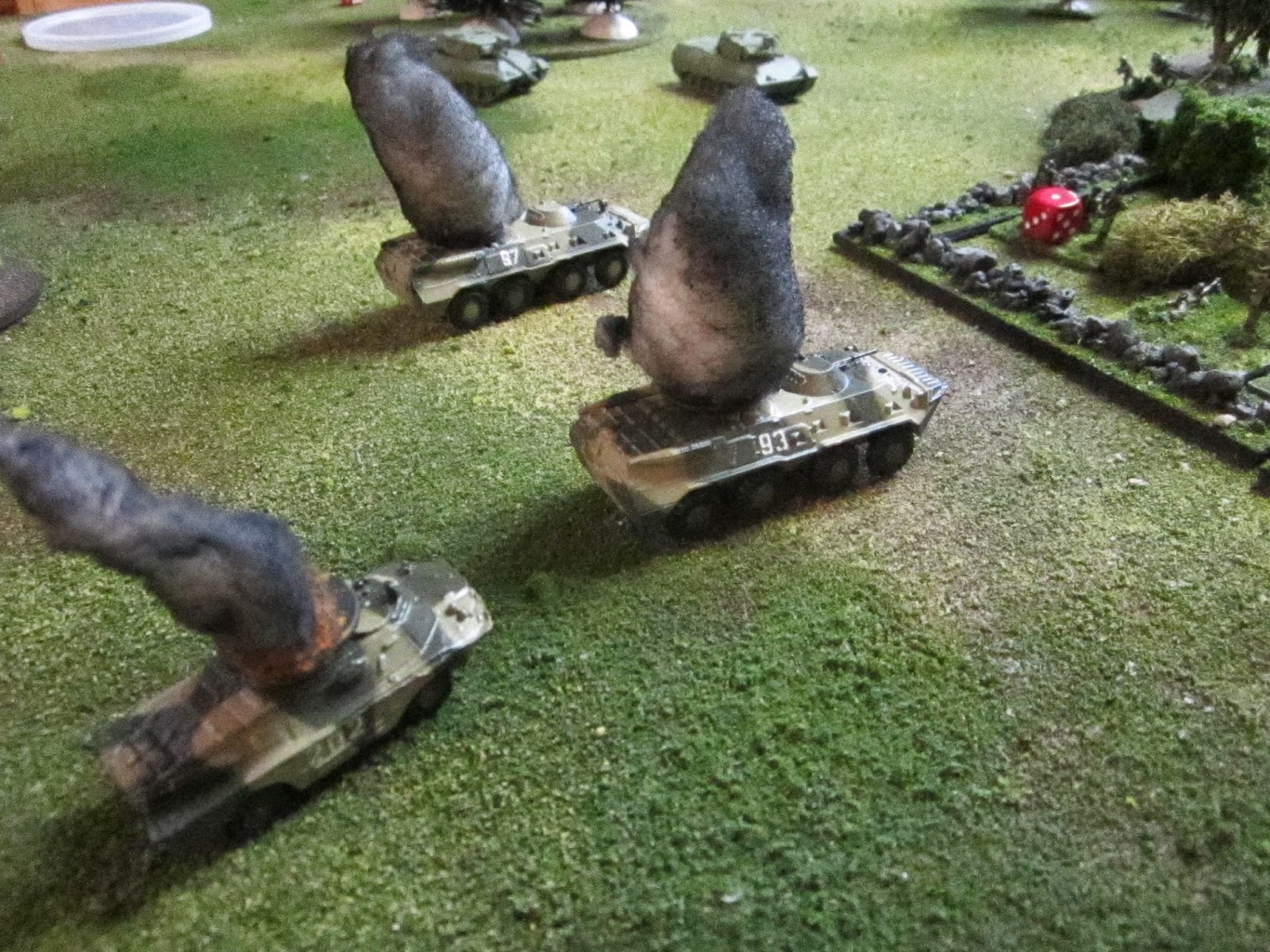 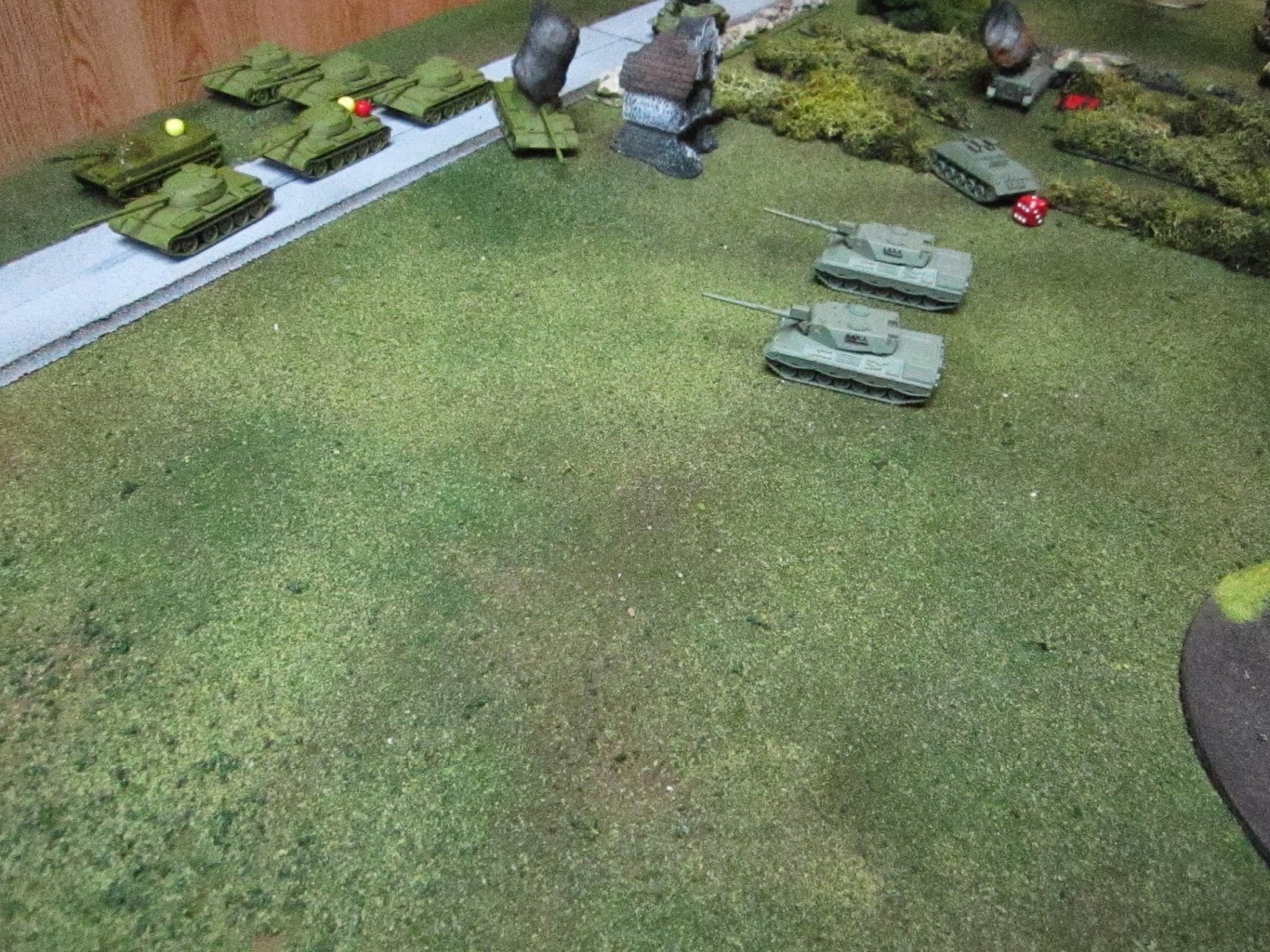 Review & Lessons Learned:
This game was a nail biter.  Not only were there alot of "1"s rolled at in-opportune times, but I'm still learning what my units' capabilities are and the limits of the rules.    As I said before, I really like Rapid Fire.  I think it is truly unique from every other rules set I've played.  You just have to get a hang of the rules and at that point, you start to understand what the authors are trying to convey, namely that it's not all a "turkey shoot" and that fires must be intelligently decided on, unlike most other microarmor games when you make decisions that your level of responsibility would never otherwise would have to make.  The level of command represented by RF puts you in command of a truly operational level force complete with all the support, goodies, and toys you'd expect to have as a Colonel commanding a maneuver brigade on a 20th century battlefield.

Again, it's tough to get the hang of it as it has a non-standard sequence of play, but once you do get the hang of things, the turns go alot faster.  The small arms, AT and HE fires system is also unique and units do not evaporate as quickly as they do in other game systems.  IE your troops have real staying power, and the combined arms capabilities they bring to the fight are exploited.  You just have to know how to use them!  Artillery works great against infantry, when you can get it and when it's on target!  AFVs not so much, but it can happen.  Especially if you bunch up your tanks like the Sov's on the road in this game.  Artillery was also responsible for shredding about half of the mech battalion so you've absolutely gotta use it as your tanks and troops will eventually miss a target or roll "light damage!"

In this game, I think the Soviets are going to win for the simple fact that at least 2 companies of the 3 tank company battalion are going to make it off the board.  Unless the Germans roll some really hot dice, they're unlikely to knock out the company and a half of tanks in the number of turns remaining.

For their part however, the Germans are still relatively intact and will likely withdraw in good order.  Not a single tank was lost, however the infantry took high casualties.  It's on to the next battle to try and stop Ivan!
Posted by Disgruntled Fusilier at 11:35 AM