I wanted to try something a little different today so I placed some terrain down and grabbed my "Squad Leader in Miniature" (SLIM) rules along with the original SL rulesbook and a bunch of my 15mm Eastern Front Soviets and Germans to play Scenario #1: The Guards Counterattack.

While I don't have the urban nightmare that was the streets of Stalingrad, the numerous stone buildings in this village and all of the rubble definitely provided the ambiance and solid cover I was looking for.

The Germans are outnumbered and hard-pressed to defend the stone buildings on the map.  The Soviets have a massive infantry group in a reserve position on the table.  The names of the officers and NCOs are directly from the Scenario Card.

Original victory conditions stipulate that the Soviets must occupy 2 buildings initially occupied by the Germans, or have a significantly higher amount of stone buildings in their possession.  To make this really easy, I only included a handful of standing stone buildings on the table, 2 of which were already occupied!

This game featured a ton of "oh crap" moments just like I remember when playing SL in college.  Long-shot MMG bursts taking out entire squad and platoons in defensive fire were commonplace this afternoon.

Rifle and MMG fire from the Russian positions against Berki's HMG section broke the section almost immediately and they were suppressed allowing the Soviet infantry already in the town free movement on the German right. 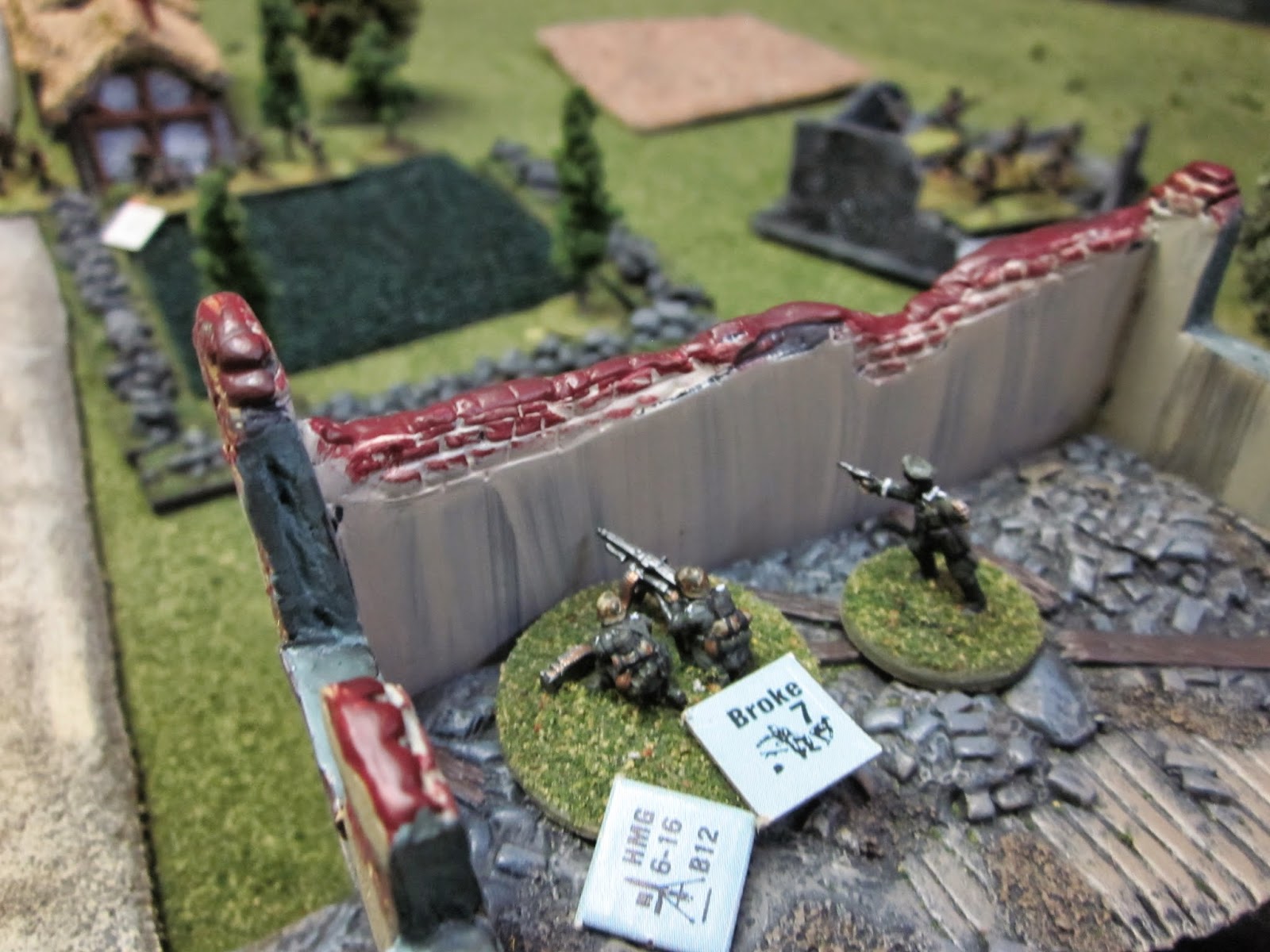 Fire from the Commissar's position in the village center crippled the German command group and each rifle squad broke under the accurate fire. 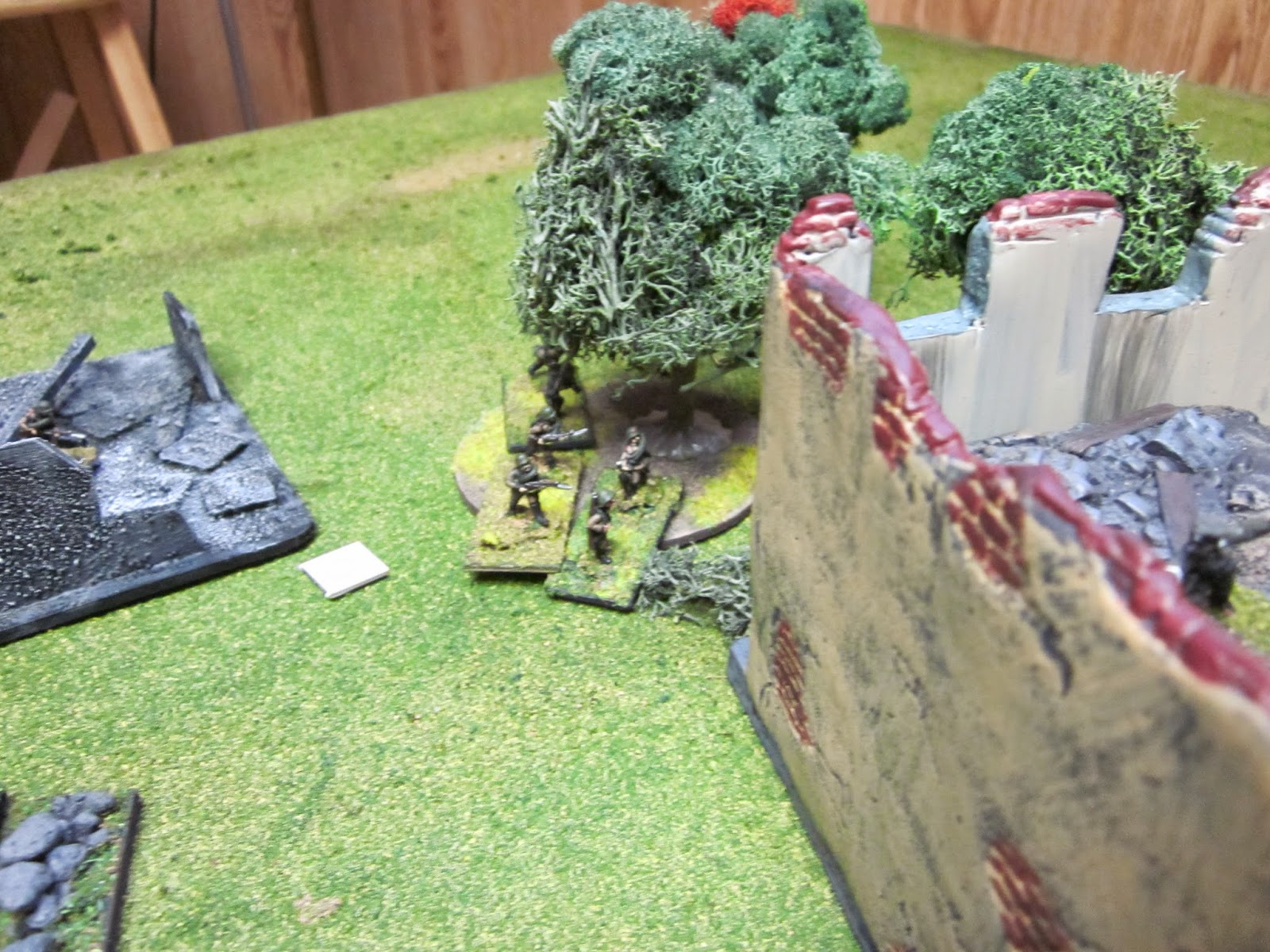 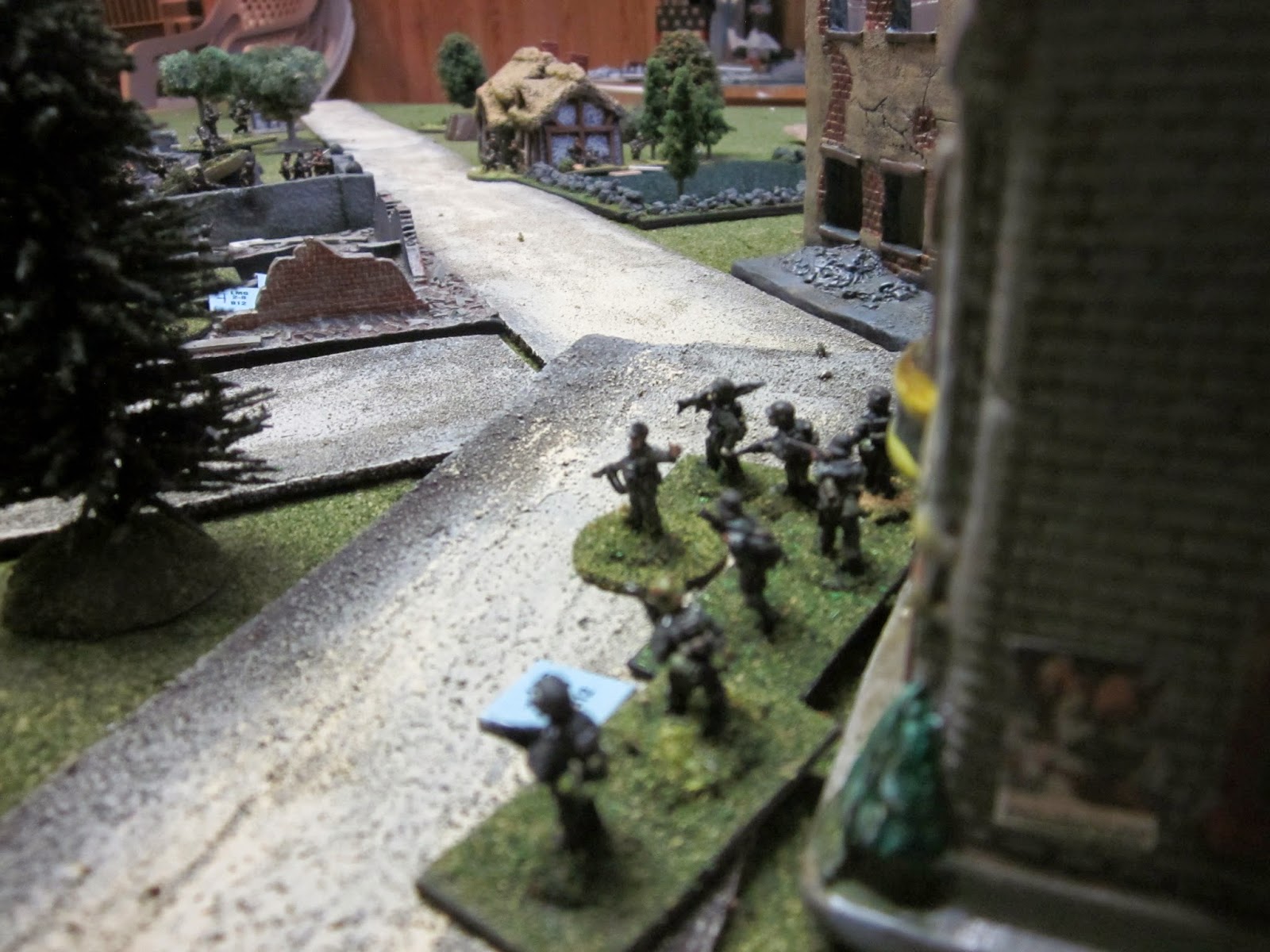 The Soviets push forward despite some early losses.  The Germans attempt to leapfrog a platoon back towards the buildings.

The last words of SGT Hamblen, meanwhile, are "well i never expected that to happen" as the platoon is eliminated by defensive fire crossing a linear danger area (the Soviet MMG using long-range, defensive fire!  Firepower 6 but minus 2 on the die roll gets them a KIA result.  These were losses the Germans really couldn't afford to take)


The Soviets move their assault group forward in one huge stack and the Germans pour rifle and LMG fire into the advancing khaki wave. 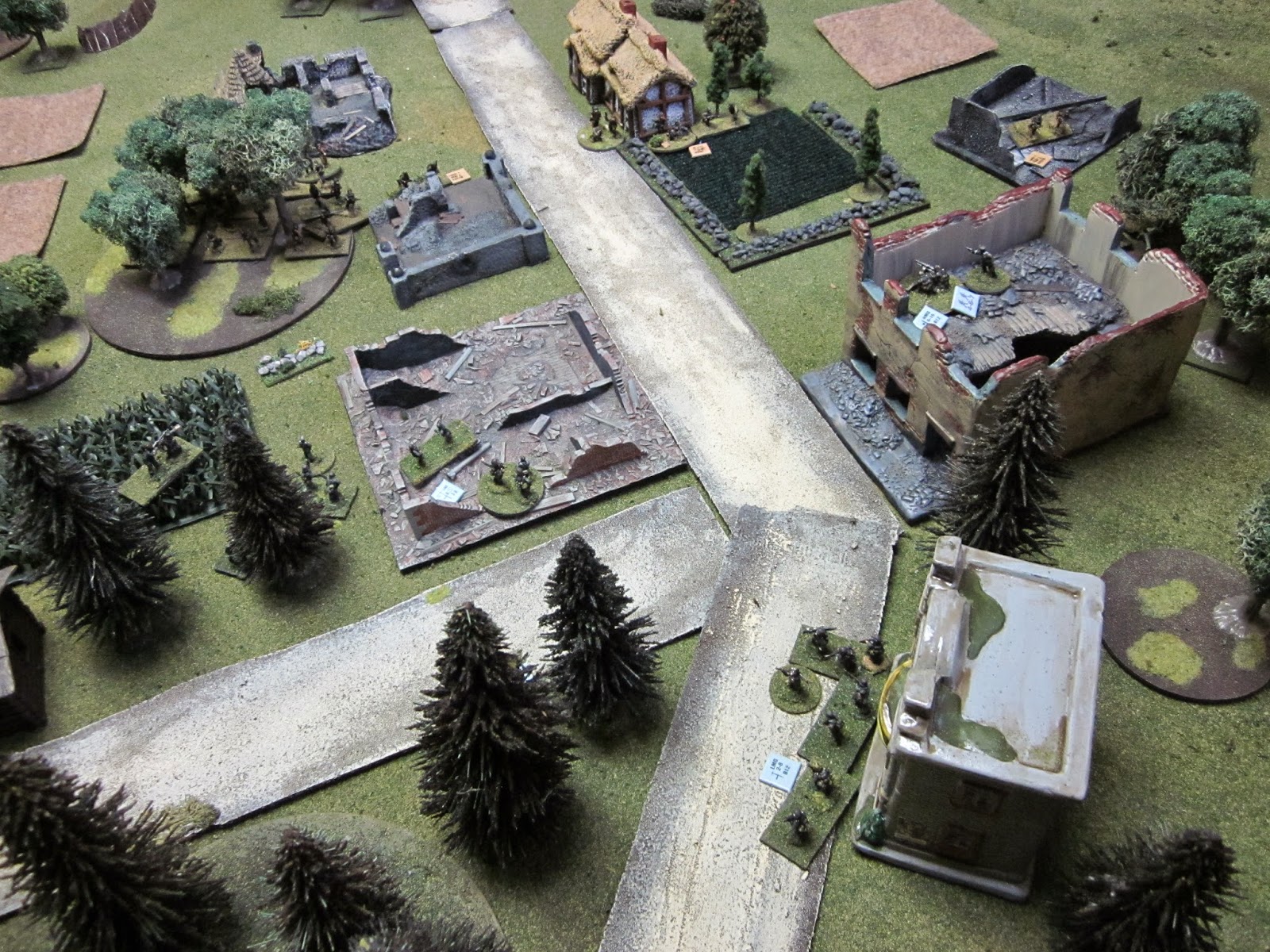 The Germans are able to thin out about half of the attackers before grudgingly giving ground themselves.  While no squads are knocked out, about 6 Soviet "Guards" squads are broken and sent to the rear in cover. 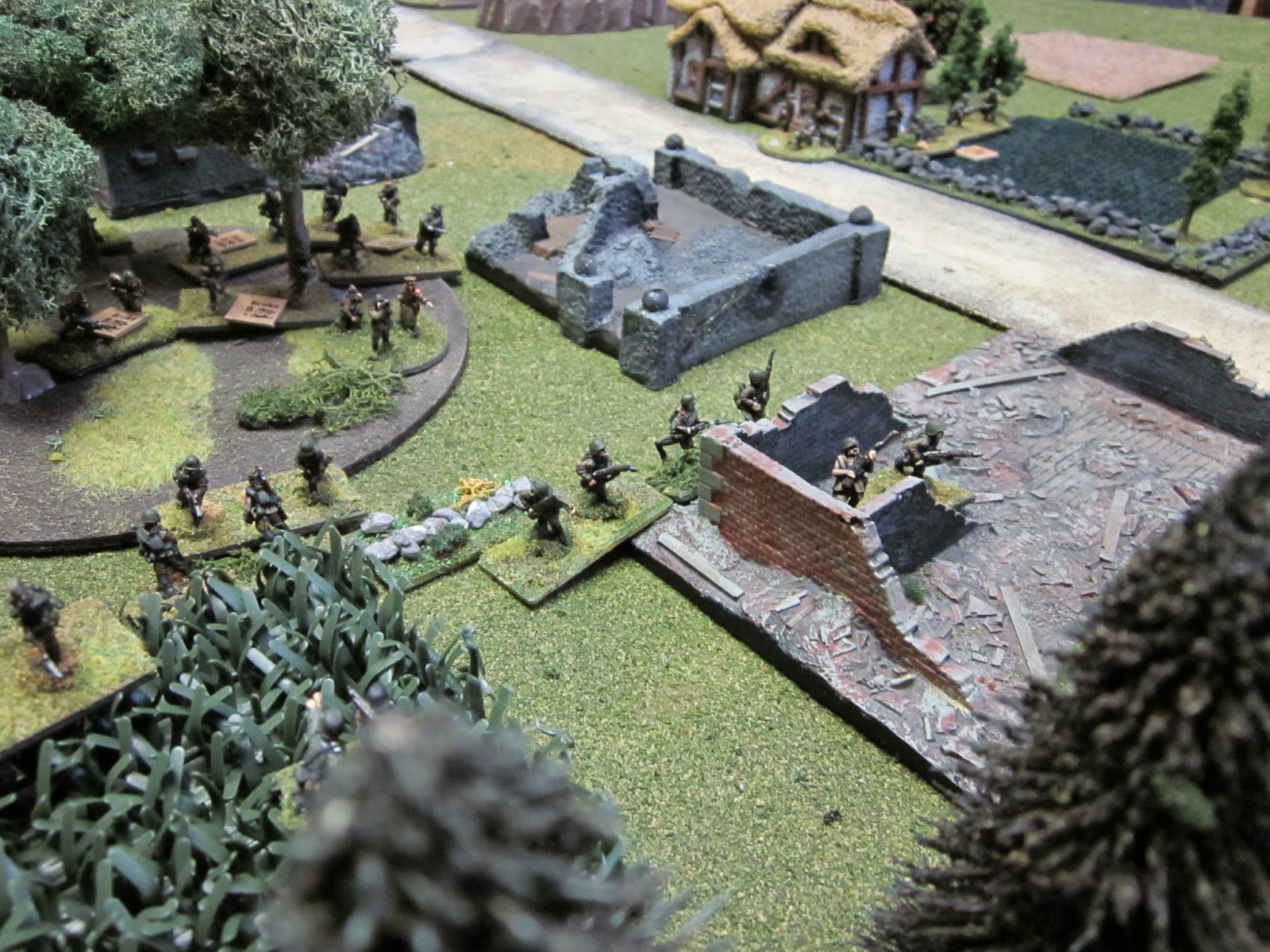 Meanwhile, on the Soviet left, the Soviets sneak up to the stone and brick structure housing the German HMG section and SGT Hieken.  Ineffective defensive fire and bad rolling sees Hieken and his section wiped out, opening the back door of the village to the rest of the Soviet squads still in cover.  1 stone building down, 1 to go! 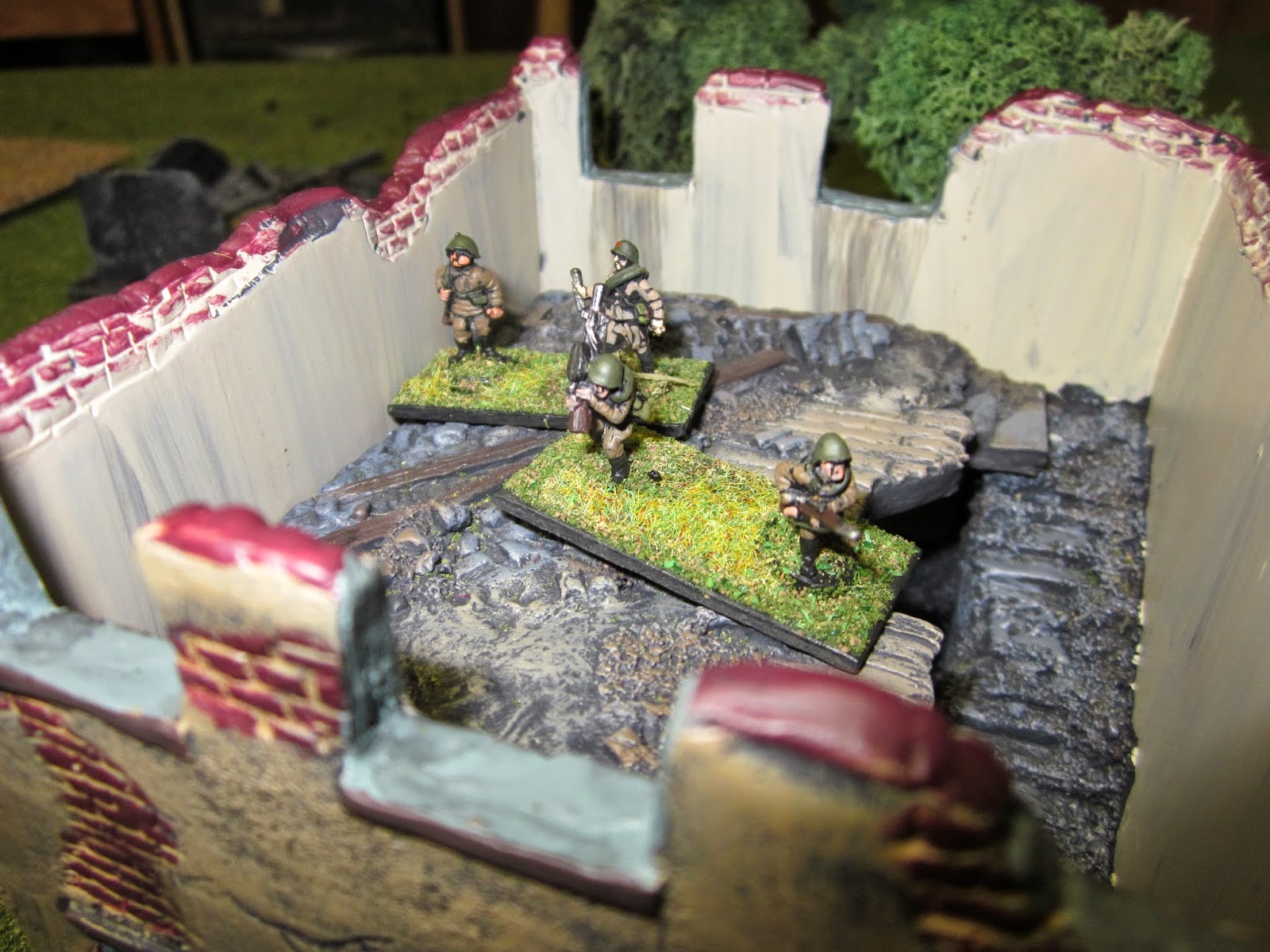 German resistance collapses and the remaining landers, on their last turn, are unable to fire at any targets so they call the game and run off.  Colonel Berki's troops occupy the old Party Headquarters building and the battle is over. 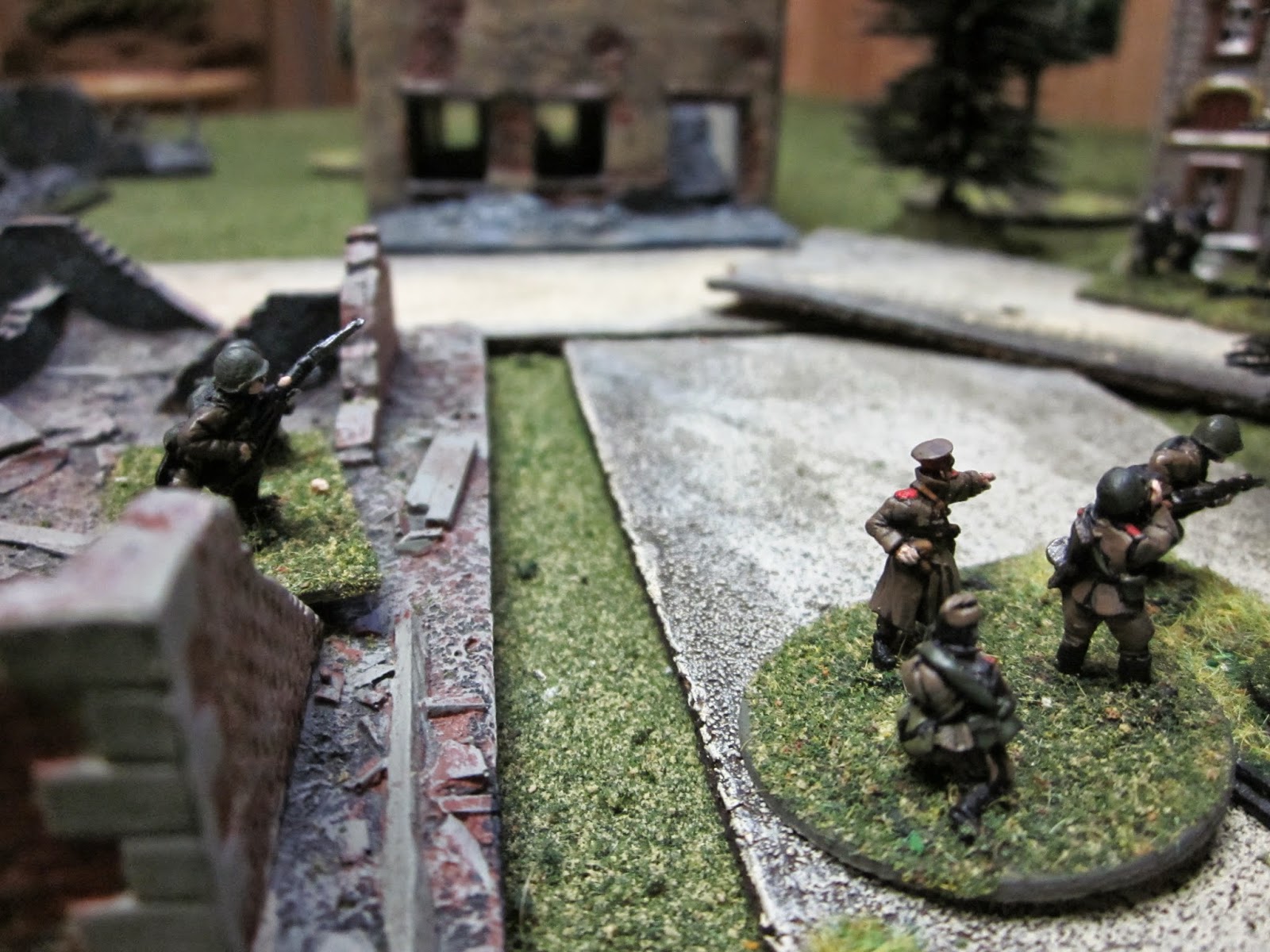 Well nice going if you made it this far.  I am a big fan of Squad Leader and playing it in miniature is all the more enjoyable as it's much more visual.  Tracking units might be difficult if playing a larger battle but I certainly think the game can handle it.  You can download the rules and the SLIM supplemental rules for free and they should be available on the links section on my blog.

Posted by Disgruntled Fusilier at 1:32 PM